Pinterest may be best known for shopping inspiration and design ideas, but the company’s newest product wants to inspire its users to tap into their own creativity. The company has quietly launched a new iOS app called Shuffles for putting together collages using photos, image cutouts and other animated effects. The app is currently in an invite-only status with the ability to join a waitlist from its home screen.

According to Shuffles’ description on the App Store, users can build their own collages using Pinterest’s photo library or snap photos of objects they want to include using the camera. They can also cut out individual objects from within an image using a tap — a feature that recalls iOS 16’s own clever image cutout ability. Images in Shuffles can then be rotated, layered and resized on the screen to create the collage, and animations and effects can optionally be added. The final project can be shared with friends for collaboration or posted to public groups where others can “remix” the original creation in their own way.

The app’s description suggests it could be used for visualizing a room makeover, fashion ideas, moodboards and more.

While the company hadn’t formally announced its plans around Shuffles, a Pinterest spokesperson confirmed the app hails from its new in-house incubator, TwoTwenty.

“Shuffles is a standalone app created by TwoTwenty, Pinterest’s innovative incubator team. Shuffles is an engaging way to create, publish, and share visual content,” the spokesperson said. “With more people coming to our platform for creative inspiration, we’re continuously experimenting with new ways to help Pinners and Creators bring their ideas to life.”

“As this app is in its initial test phase, we don’t have any additional details to share on the record at this moment,” they added, declining to share more about its future plans or monetization potential. 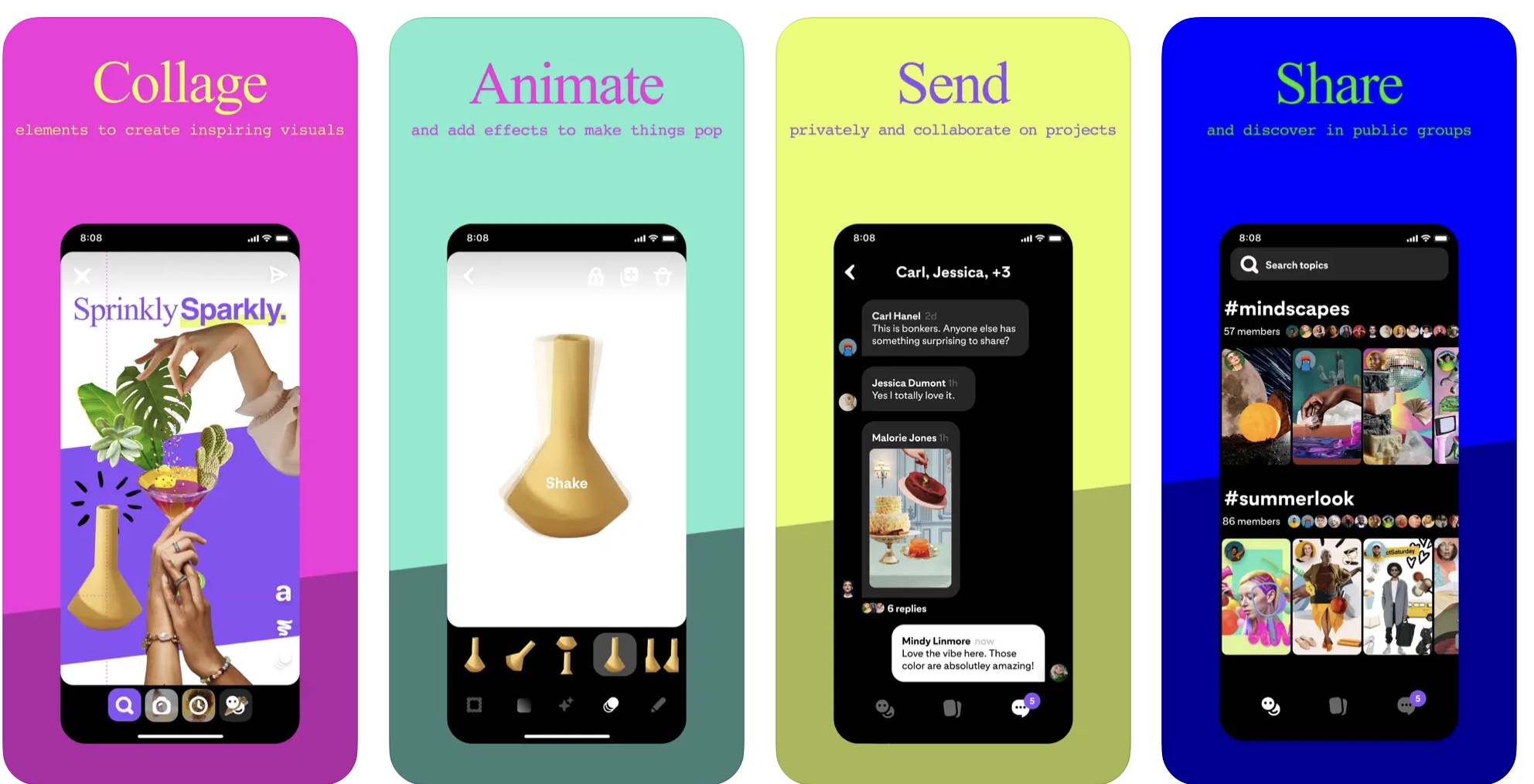 Launched last November and named after Pinterest’s first office, TwoTwenty’s goal has been to foster more internal experimentation at the social network and increase its pace of innovation. Other tech giants, including Meta, Microsoft and Google, have similar efforts with their own incubators — NPE, Microsoft Garage and Area 120, respectively.

In Pinterest’s case, the company has been working to make the transition from its past as an image pinboard and bookmarking site that helps drive e-commerce transactions to adapt to today’s creator-driven era where consumers are prompted to make purchases through video content. To address consumer demand for video, Pinterest released its TikTok-like Idea Pins and a live shopping feature, Pinterest TV. The latter was also launched by TwoTwenty’s team, in fact.

But TwoTwenty isn’t just meant to experiment with video. The organization consisting of engineers, designers and other product experts aims to research, prototype and test a variety of new ideas to see if any gain traction. Those that do will be handed off to other teams inside the company to scale.

The early-stage project Shuffles is just one of those ideas.

What’s funny is that Pinterest’s new app is similar to a mobile collage maker Meta ran a couple of years ago through its own in-house incubator, NPE Team. Known as E.gg, the zine maker of sorts developed a small following who enjoyed creating mixed media collages that combined images, text and GIFs. But like nearly all of Meta’s NPE projects, E.gg was shut down. Pinterest’s Shuffles could be looking to tap into that same consumer demand for image-led creativity and inspiration, which Meta had abandoned.

The app also arrives at a time when there’s an undercurrent of resistance to the idea that video has to be the only form of social expression and creativity in social media, as all tech giants are trying to morph themselves into TikTok. This past month, user backlash against Instagram’s deprioritization of friends’ content and photos reached a head after even the Kardashians begged the app to stop trying to be TikTok. Instagram rolled back some of its recent changes as a result but it’s still set on a video-first future.

Pinterest, to some extent, likely understands that its own pivot to video may not be able to retain users’ attention indefinitely in the face of the TikTok threat. Finding another area of growth through an experimentation could give it new avenues to explore.

Financially, the company’s most recent quarter’s earnings proved solid from a numbers standpoint, but it had missed on user growth. Monthly active users were down 9% year over year to 433 million.

The company is due to report its second-quarter earnings after the market closes today. Of note, these will be the first earnings since new CEO Bill Ready took over the job from co-founder Ben Silbermann, who transitioned to executive chairman on June 29, 2022.