TikTok wants to determine its users’ appetite for mobile gaming with the launch of “mini-games” that can be played inside the social video app and discovered through creators’ videos. TechCrunch learned and has now confirmed TikTok’s new gaming pilot quietly launched just weeks ago with a variety of new partners, including game developers Vodoo, Nitro Games, FRVR, Aim Lab and Lotum.

The launch follows reports earlier this year that the social video app maker was looking to expand into HTML5 gaming after first testing the waters with gaming giant Zynga last November. The two companies had then teamed up to launch a TikTok exclusive title, Disco Loco 3D, which was similar to Zynga’s successful game (by way of acquisition) High Heels.

At the time, TikTok said it was engaged in discussions with other game makers for similar deals, telegraphing a larger gaming expansion still to come. The move, if successful, could one day position TikTok as a home for casual mobile gaming that routes around Apple and Google’s app stores — and, potentially, their cut of future gaming revenues.

The list of new mini-games can be found inside the TikTok app when posting a video to the platform. On the final screen ahead of publishing, creators can add hashtags, a description, a location and more, as well as optionally add a link to other content. Before, tapping the “Add Link” button allowed users to add links to a variety of other experiences via TikTok Jump, a third-party integration tool built into TikTok’s app. Creators could link to content in other apps, like Whisk’s recipes, BuzzFeed and Quizlet’s quizzes, Breathwork’s breathing exercises, Rotten Tomato’s ratings and more. The new games are not a part of the TikTok Jump initiative, we understand, as they’re a first-party effort. However, they’re found in this same section. 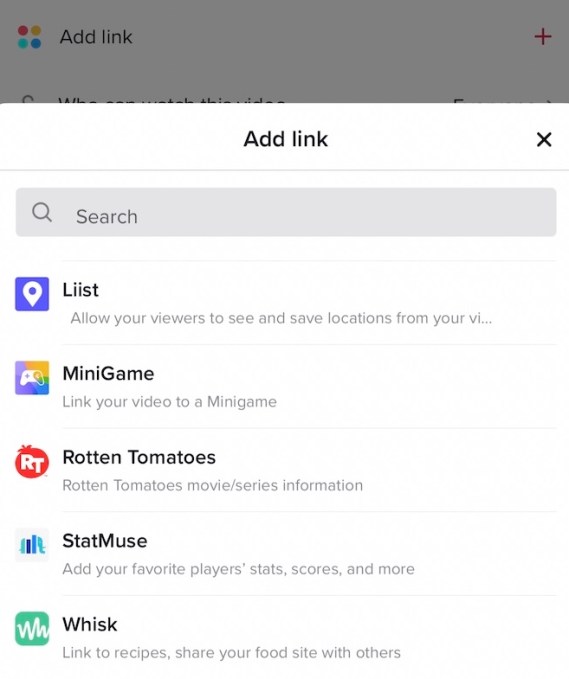 Now, when a creator publishes a link to one of the new games available in this section, it appears as an anchor above their username on the resulting video. From there, viewers are able to click through to the game when they come across the video.

At launch, the HTML5 gaming titles include the following games:

TikTok had not officially announced the launch of its mobile gaming pilot, but a spokesperson confirmed the effort began testing in various global markets a couple of weeks ago.

“We’re always looking at ways to enrich our platform and regularly test new features and integrations that bring value to our community,” a TikTok spokesperson confirmed to TechCrunch. “Currently, we’re exploring bringing HTML5 games to TikTok through integrations with third-party game developers and studios.”

They said the initiative is in the very early stages of testing and could not comment on the deal terms with the individual game makers. However, none of the games are currently monetized either through ads or in-app purchases, we’re told. For the time being, the pilot is only looking to determine if and how TikTok’s existing gaming community interacts with these games, and to what extent users will create content around the titles. Of course, longer term, things could change — if TikTok wanted to go in that direction.

TikTok told us these new mini-games are a separate effort from the games being developed for TikTok LIVE, which allow creators to interact with fans when livestreaming.

App intelligence firm Watchful.ai noted the games were recently listed under the “Add Link” section under the heading “MiniGame,” but Zynga’s game Disco Loco 3D is still listed separately. It saw the addition recently rolling out to markets in Southeast Asia. However, we’ve found the mini-games available in this same menu here in the U.S.

TikTok is not the first tech giant to expand beyond its core focus into mobile gaming. Google, for example, embraced HTML5 games with its launch of the gaming platform GameSnacks, which it scaled across Google Chrome’s new tab page in markets like India, Indonesia, Nigeria and Kenya last year. Facebook also stepped into cloud gaming last year with its launch of Facebook Gaming on the web and Android. Netflix, meanwhile, has made free downloads of mobile games a part of its subscription.

There’s some irony here that TikTok is building a casual gaming platform and that its first partner on this effort was Zynga. The gaming company originally built its business on the back of Facebook, tapping into the social network’s growing user base to attract players to its titles. This helped it become one of the biggest companies in social gaming and led to its eventual IPO. These days, however, Facebook has become passé with younger people while TikTok is the world’s top app. Zynga, meanwhile, is no longer a standalone company. But mobile social gaming could grow again if TikTok’s pilot proves successful.