Today, digital world maker Stadium Live Studios, Inc. announced its $10 million Series A funding round to continue its mission of bringing fantasy sports to a younger generation. The Canadian startup was founded in 2020 by Kevin Kim and Paul Xu with the goal of gamifying the sports fandom and building a “digital playground” of sorts for Gen Z sports fans.

Its flagship product, Stadium Live, is a sports community platform that allows users — ages 12 years old and up — to customize their own avatar, as well as buy digital collectibles, gain XP points by drafting teams during live matches and sports streams, create a squad with friends, join daily livestreams, polls, trivia and chat with like-minded players. Stadium Live has garnered over 500,000 users to date.

The funding is a significant extension to its $3 million seed round in January 2021, bringing the company’s total post-money valuation to around $32 million.

“The sports industry has been really slow at adapting to a new generation of fans,” co-founder and CEO, Kevin Kim, told TechCrunch. “The industry hasn’t found a good way to engage with them. And that’s what we’re trying to solve.”

As for the new funding, Stadium Live plans to hire engineering and product resources to push out more features that will help retention and monetization. It will also go toward the Android release, slated for October or November 2022. The Stadium Live app is currently only available on iOS devices.

One social feature in the works is called “Clubs,” allowing users to create micro-communities.

“You get to create rooms together about a certain topic that you’re into, and you have club owners that drop questions or trivia or threads,” explained Kim. “So, within our community, there are subcommunities.”

Stadium Live also has “Rooms,” a feature that’s currently in beta and allows fans to create a unique room with avatar items. Some of the items are interactive, such as a speaker that plays music. There are also embedded TikTok videos, sports highlights and more. Kim told TechCrunch that the company plans to allow users to create utility within the room, such as hosting their own events, trivia and watch parties. “Rooms” will officially roll out sometime in October. 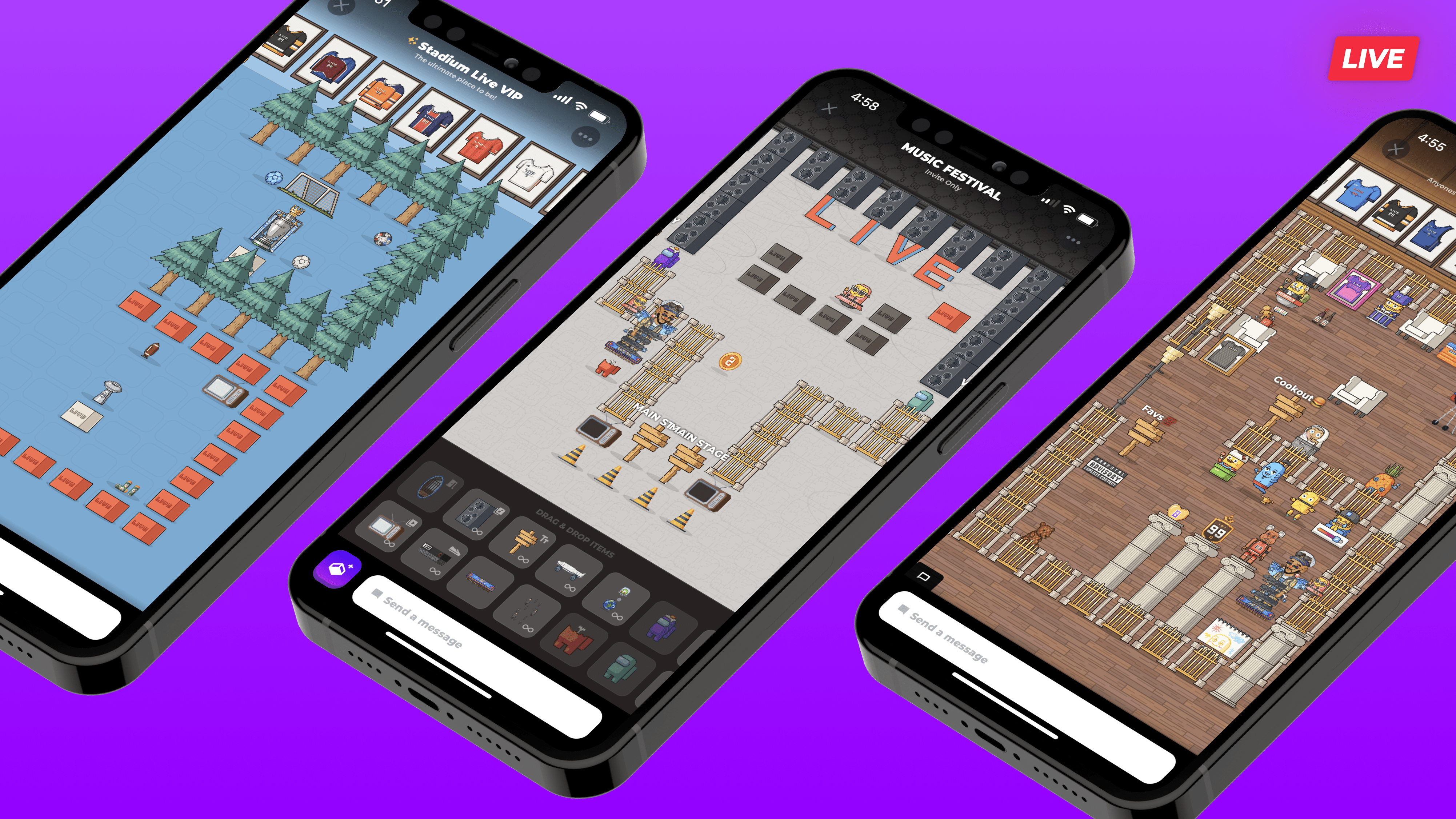 The company also wants to expand into more leagues and other verticals. “We want to connect the next generation of fans to different brands, leagues and properties down the road,” Kim added.

Stadium Live partnered with Fan Controlled Football (FCF) recently, an alternative football league where fans vote on real-time decisions for their team. The sports platform wants to play a key role in enhancing the ways the league engages with its Gen Z fans digitally. Now the app streams FCF’s live matches, drops questions for fans and has a room for the league that’s decked out with FCF items like jerseys and trophies. 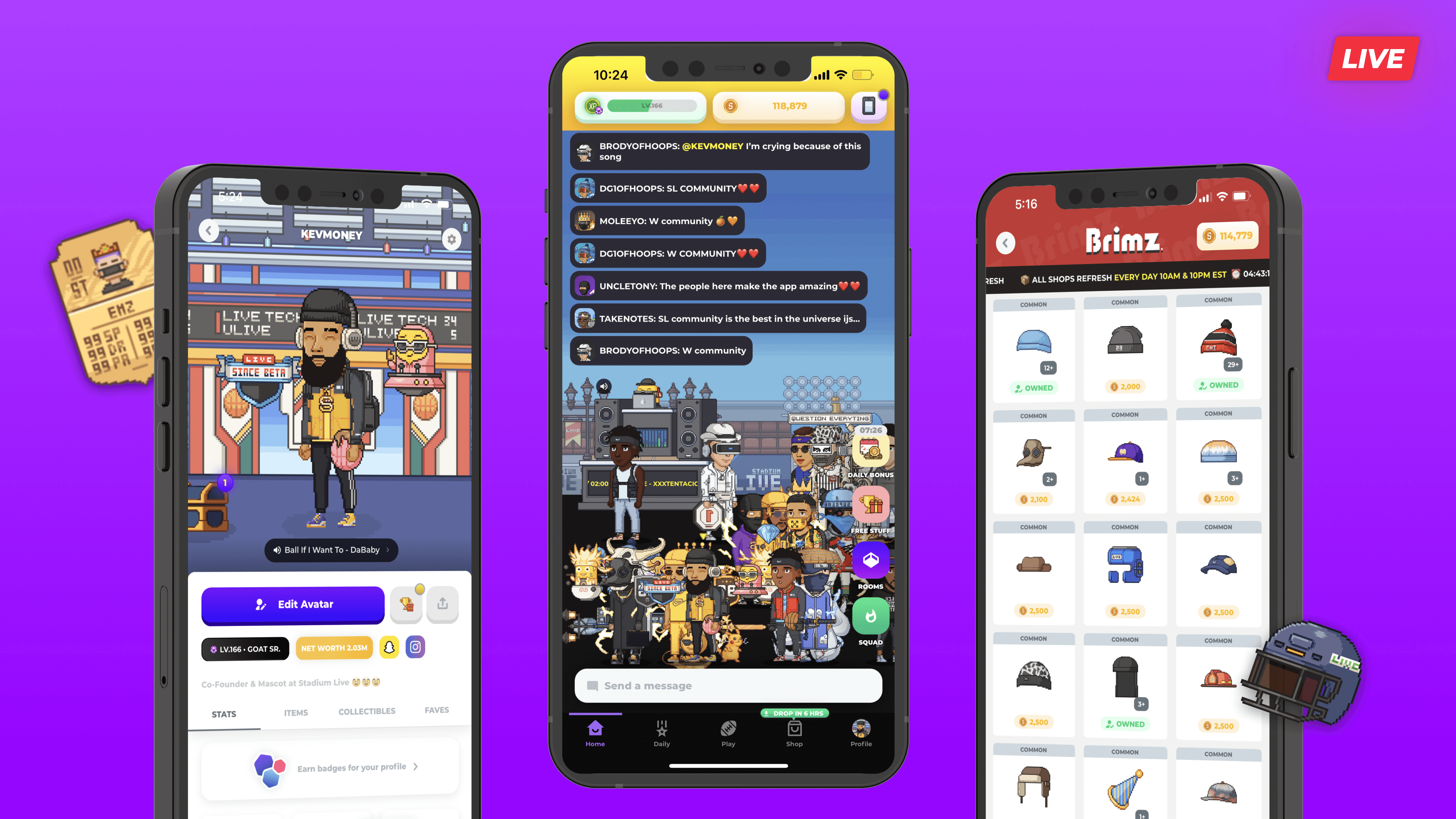 After testing the app, TechCrunch found that the chat was buzzing with users playfully competing with each other on how much they are “grinding” for XP and bragging about what level in the game that they’re at, which ranges from Drafted and Rookie to Sophomore, Role Player, All-Star, Superstar, MVP (Most Valuable Player), Legend and GOAT (Greatest of All Time).

Players can also have “Squads,” which get ranked weekly by XP in a top 10 list. This week, “Immortal” is the top squad with 596.54K XP. The maximum number of members for each squad is 30.

We also found that the app is a community for all interests, not just sports — which is still the main focus. Livestreams range from video game seshes to “fit battles” (outfit contests), among others.

“Sports is more than just sports to Gen Z, it is culture, music, fashion and so much more. Our focus is on building the tools to let people interact with each other within the metaverse. We’re building more than just an environment; we’re building a community,” Kim said.

Since the platform is catered to 12-year-olds and older, he also mentioned that there are about 30 moderators on staff within the app and on Discord.

Last NBA season, Stadium Live grew an average of 30% month over month for the duration of the season, October 2021 to April 2022. Active users spend about 35 minutes per day on the app, whether that’s being part of the match, watching streams or interacting with their friends.