Codefresh today announced the launch of its hosted GitOps service based on the Kubernetes-centric Argo open source project. The new hosted service, which will be available for free to community projects, individuals and small teams, aims to give DevOps teams access to a GitOps platform that encodes some of the industry’s best practices while still giving those teams the flexibility to tweak it to their needs.

It’s worth noting that Argo offers quite a bit more than “just” Argo CD and earlier this year, Codefresh launched support for Argo Workflows, Rollouts and Events as part of its overall platform. But that was for self-hosted installation. Now, with the launch of hosted Argo CD, Codefresh also offers an end-to-end hosted GitOps platform.

“This is basically doing for Argo and GitOps what GitHub did for git,” CodeFresh co-founder and Chief Open Source Officer Dan Garfied told me. “We’re providing that fully hosted turnkey experience. You just show up, connect your cluster, deploy an application and you’re off to the races. You don’t have to manage it, you don’t have to update it, you don’t have to think about it — it’s just taken care of for you.”

He noted that when the company launched its first Argo CD GitOps solution in 2020, it quickly became its most popular product. And while Codefresh also offers its own continuous integration (CI) service, Garfield stressed that users can also connect the service to the likes of Jenkins and GitHub, too. “We see so many people coming in to GitOps who don’t want to rethink the CI part of the equation,” he said. “So now you can just connect it and it will automatically show up in your GitOps dashboards and give you all of that extra information that’s so helpful for remediation and pulling up these insights.” 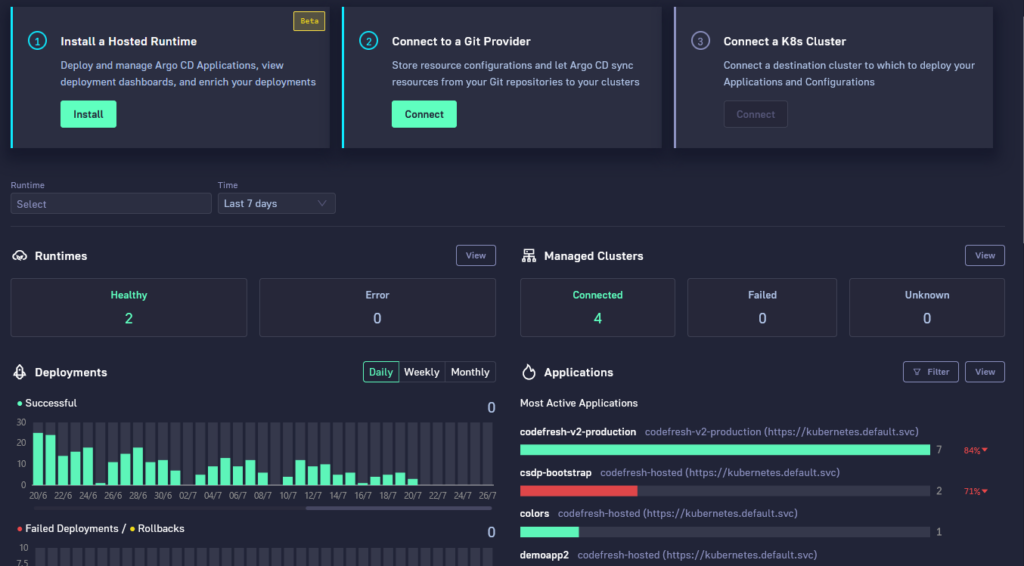 A hosted GitOps platform removes that barrier for users who want to change the way they are deploying while letting them keep their integration pipelines in place. And that, Garfield stressed, is very much in line with the company’s focus on integrating with other third-party services to help its users deliver their software to their customers. With Codefresh as the integration point, those users then also get consolidated dashboards, no matter whether they are using GitLab, Bitbucket or both.

“Codefresh has demonstrated to enterprises of all sizes the value inherent to Argo CD, and this value is built atop a sustained commitment from Codefresh and the community to cultivate Argo and GitOps for the future,” said Raziel Tabib, co-founder and CEO, Codefresh. “To empower everyone with this capability is the fullest expression of our commitment to open source innovation.”

Current Codefresh customers include the likes of GoodRX, Skillshare and Monday.com. Looking ahead, these users will also likely see Codefresh do more with the overall insights it gets about its users’ development and deployment data that flows through its systems and third-party observability tools. While the company doesn’t want to get into the observability space itself. Codefresh wants to become the central hub for giving its users insights into what’s going on with their deployments, especially as more development teams move to progressive delivery with canary deployments and the inevitable rollbacks when things go wrong.