When SoundCloud launched its artist-friendly fan-powered royalty system last year, the model was only available for independent artists subscribed to the streamer’s paid tiers. Now, SoundCloud has inked its first major label partnership with Warner Music Group, whose artists can now earn fan-powered royalties on the platform too.

Since the early 2000s, artists and record labels alike have struggled to figure out how musicians can make a living when it’s so easy to download .mp3s online. New models like music streaming on Spotify can feel like a stop-gap, though, since payouts from these services can be paltry if you’re not Lizzo or Olivia Rodrigo.

Spotify pays artists via a pro-rata model, which means there is a large pot of money that gets divided among all artists depending on how many streams they each get. But that means that the success of superstar musicians can inadvertently take away from the payouts of up-and-coming performers.

The user-centric model, or what SoundCloud calls fan-powered royalties (FPR), is designed to level the playing field for smaller artists.

“Under FPR, each fan’s subscription or advertising revenue is distributed among the artists they listen to, rather than being pooled under the traditional pro-rata model the music industry has been using for over a decade,” SoundCloud explained in a press release.

In its initial roll-out of FPR, only independent artists were eligible to earn FPR, and they have to pay at least $30 a year. Now that SoundCloud has signed a licensing deal with Warner Music Group (WMG), one of the largest global record companies, even more musicians will be eligible for these payouts from SoundCloud.

Getting signed to a major label is no easy feat, so the artists this deal will benefit are already pretty established. But affiliation with WMG doesn’t always guarantee riches, especially for artists whose revenue from touring has been decimated during the coronavirus pandemic.

Buy-in from major labels is necessary for an FPR system to work, which is why Deezer hasn’t been able to widely implement a similar model yet, despite vocally advocating for it since 2019.

Meanwhile, Tidal introduced a fan-centric model in November that doesn’t require buy-in from labels. In addition to standard pro-rata payouts, fans on Tidal’s highest tier ($20 per month) will see 10% of their monthly payment sent straight to their most-listened-to artist. Tidal only makes up a small fraction of the global streaming music subscription market, though. 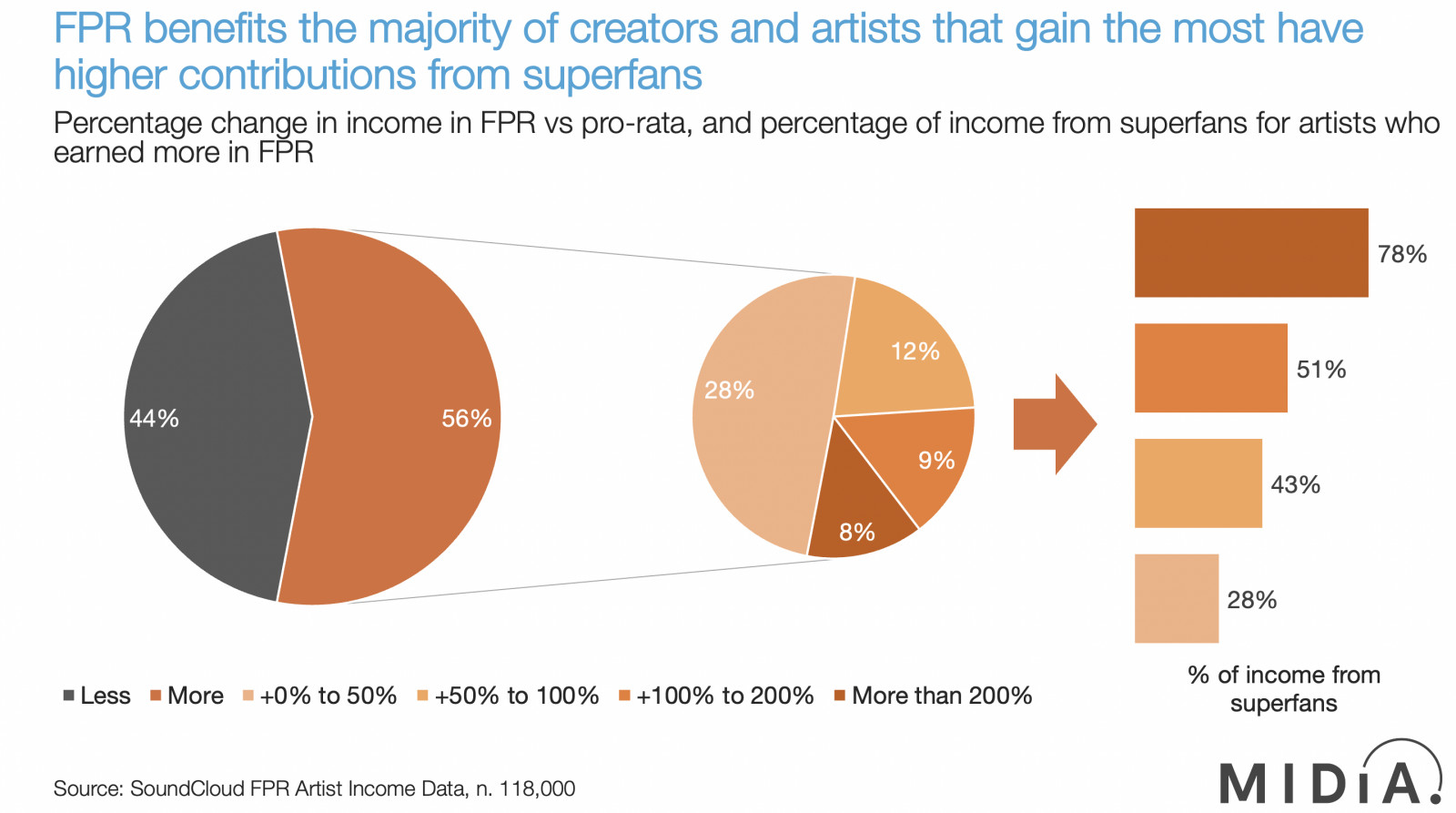 Though SoundCloud isn’t particularly popular for paid subscribers either, it hosts a ton of music — more than 300 million tracks from 30 million artists. Because SoundCloud hosts so many independent musicians, it’s been easier to study how FPR works in practice.

In one of the first studies of FPR in action, entertainment research firm MIDiA analyzed FPR data from 118,000 SoundCloud musicians, finding that 56% of artists earned more under FPR than pro-rata models; but those who earned less under FPR were often larger artists with over 100,000 listeners.

MIDiA also made the interesting observation that smaller artists get larger payouts when they have “superfans,” or listeners whose streams contribute more than ten cents a month. The report also found that FPR helps the longtail of musicians move up into higher payout brackets — SoundCloud saw a 9.2% increase in artists who earned over $1,000 from streaming payouts between April 2021 and February 2022.

For user-driven payout models to have a significant industry effect, larger players like Spotify or Apple Music need to adopt the model and get record labels on board, which is no small task. But at the very least, SoundCloud’s deal with WMG is promising news.

Spotify adds more artists to its Blend tool, allows fans to buy merch via the feature