After seemingly pulling off the strangest unicorn success story in tech, the founders of NFT project Bored Ape Yacht Club (BAYC) have an awful lot to prove with their startup Yuga‘s early beta vision of the metaverse, a gaming platform called Otherside.

Few entertainment startups have had this level of community pressure riding on their first game and fewer have had quite as many people rooting for them to fail. The NFT bull run, which made early Bored Apes holders and the project’s founders very rich, also minted plenty of enemies who decried NFTs as ponzi schemes parting vulnerable suckers with their cash. As crypto prices have crashed in recent months, many recent retail investors in the sector have indeed lost big.

Yuga’s challenge of maintaining a community of NFT holders throughout the development of the Otherside title during what many fear could be a historic crypto winter nested inside a recession is a certain level of daunting. The startup must also reckon with enduring skepticism of gamers surrounding NFTs while transitioning from the exclusivity of its pricey six-figure NFT clubs to the mass appeal of an MMO.

Otherside’s success would mean an awful lot to Yuga’s VCs which gave it an unheard of $4 billion seed stage valuation, but it could also mean a lot to the fundamental idea of web3 “ownership” during a time when tech’s biggest powers-that-be, led by Meta, are promising a metaverse revolution.

“There will be lots of metaverses … A lot of the other metaverses out there, I think the most interesting question will be: Are they open? Or are they closed?” Yuga CEO Nicole Muniz asks in an interview with TechCrunch. “Do you own yourself in this world? I think that’s the first question. Like, do you own you?” 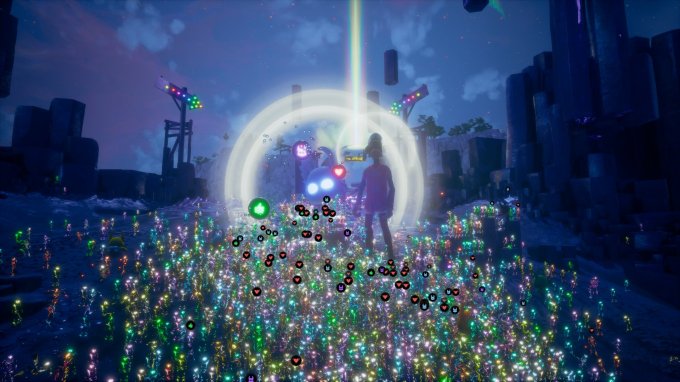 This past Saturday, this reporter joined a large private demo of Otherside called “First Trip,” where 4,500 Yuga community members logged on simultaneously to experience an hour-long tightly scripted demo. The users were all suited up as multicolored robot avatars, with only a single Bored Ape in sight, albeit a very large one named “Curtis” guiding the thousands of gamers through the experience that showcased controls and brought users their first taste of the Otherside platform.

From a technical standpoint, the demo managed to go off without any clear hitches on my end. The more fascinating experience was existing in such a large crowd of avatars with full knowledge that there was a real person behind every one of them. Moving from space to space with throngs of avatars on every side while hearing light mumbles of nearby conversations gave the demo the social vibes of a small festival.

Otherside will be a platform for game developers similar to experiences like Roblox or Meta’s upstart Horizon Worlds, and those users will be able to build and monetize experiences in the virtual world on virtual land that can be bought and sold.

Shoveling thousands of gamers into a space is one thing, but giving them something worthwhile to do will be another. While the first gameplay from Otherside showcasing a 4,500 vs. 1 boss fight was a very unique experience, it’s also clear that this level of multiplayer concurrency can get chaotic very quickly but could enable a new scale of experience that titles like Fortnite and Fall Guys scratched the surface of with the battle royale format. Muniz tells me that just because Otherside is tapping gaming startup Improbable’s tech for Otherside, doesn’t mean that outside developers building on the platform will be pushed to design everything for a concurrent audience of thousands, noting that smaller scale and solo experiences will also be available for users.

“As a developer, you have the flexibility to be able to build whatever makes sense in your world and whatever vision you can come up with,” she says. “It’s a free, open world, do whatever you want, say whatever you want — unless you’re invading on other people’s rights effectively and their safe space.”

As to why this title even needs this scale when other games have been able to achieve huge audiences with smaller concurrent groups of players, Bored Apes co-founder Gordon Goner says their team is trying to build the “best metaverse possible.”

“We can build a city where thousands of people interact — this is like the level of Grand Theft Auto but in real time with real players,” says Goner.

Though the Bored Apes NFT audience is still fairly niche at the moment, the Otherside launch is a big win for U.K.-based Improbable, which is developing the title. The startup banked $500 million on its multiplayer vision five years ago and recently raised $150 million at a $1 billion value for its new “metaverse network” M2.

“This is the fourth generation of technology that started in my house,” Improbable CEO Herman Narula tells TechCrunch. “[It’s been] a very long period of evolution. But we’ve become the world’s leading provider of multiplayer experiences.”

Otherside remains deep in beta, and the team is insistent that there are plenty of community tests ahead for Yuga NFT holders ahead as they fine-tune and crowdsource their vision — “I like the idea that there’s going to be a first trip, a second trip, a third trip and on and on and on,” Goner says. “There are these milestone moments for the community that we’re iterating and co-developing the metaverse with.”

But while plenty of games have had the fortunes of major publishers tied up in their future success, few have had the fortunes of their actual players relying on a successful launch. Yuga has already banked plenty of user investment on the future promise of Otherside. The startup raked in roughly $317 million in an NFT land sale for the game, selling 55,000 virtual plots called Otherdeeds.

This sale preceded a large drop-off in the price of largely all cryptocurrencies, hitting the native ApeCoin token that users paid for their land with, dragging it down nearly 90% from its pre-sale highs before recovering slightly. Ultimately, users forked over around $5,800 USD to mint an Otherdeed at launch and the floor price still sits around 30% below that price, leaving users hopeful that their early investment will eventually pay off. The buy-in isn’t just coming from gamers either, in March, the startup raised a $450 million seed round from a16z.

The startup’s demo comes as other so-called play-to-earn crypto gaming titles like Axie Infinity have received criticism for what skeptics say are unsustainable economic models. The full scope of Yuga’s monetization plans for their network are still in development and the founders have yet to nail down timing for a wide public launch, but while multimillion dollar avatars and massive NFT land sales may be unique among today’s games, Yuga is positioning itself to compete with today’s big platforms including players like Epic Games, Roblox and Meta.

“The idea here is for an open, interoperable universe, not the sort of 50% rake that we’re seeing in other places. Assets can be user generated, user owned, moved off the platform and no one’s stopping you,” Bored Apes co-founder “Gargamel” tells us.

The company’s founders managed to seemingly allude to Meta plenty of times without actually saying the company’s name, taking shots at other metaverse platforms with high take rates. Meta’s Horizon Worlds platform comes with a 47.5% tax on goods sold in-headset. Yuga’s reticence to criticize the company directly may come from Muniz’s assertion that virtual reality, a hardware platform largely owned by Meta, is going to be big for Otherside.

Yuga’s desires to bake in reduced platform fees by relying heavily on web-based gameplay may make life easier for creator economics, but users potentially losing the ability to access the platform via traditional app stores will likely be an adoption hurdle, especially as hardware platforms continue to tightly control web browser capabilities on their network of devices.

“We’re really seeing this as multiplatform. You know, it’s desktop and mobile … VR is going to be an important platform for us,” Muniz says. “While there is likely going to be a local component to this where people are running a local version of the game and the world, you still want the link and you still want someone to be able to tweet something out and say ‘Hey, holy shit, I just slayed this dragon,’ and then anybody can join and all of a sudden be popped into exactly where you are at that exact moment and see it live.”

Metaverses grapple with Meta versus Apple