Amazon’s annual sales event Prime Day delivered more than $12 billion in sales, according to third-party estimates. The retailer hosted the popular shopping event in the U.S. and in more than 15 other countries worldwide on July 13-15. This was the first Prime Day event under the new CEO Andy Jassy, who took over Jeff Bezos last year after the Amazon founder stepped down.

The company was bullish on its Prime Day results and said it was the “best ever,” mentioning that consumers across the world spent $1.7 billion. Amazon claimed that it sold more than 300 million items during these sales, but didn’t disclose any revenue figures.

It also noted that it sold “more devices than any other Prime Day,” but refused to put any number to it. The firm said shoppers bought goods worth more than $3 billion on over 100 million items from small businesses across the two-day event.

For weeks building up to Prime Day, Amazon banked on influencers to drive sales from QVC-style live video shopping. The firm partnered with celebrities like TikTok creators Joe and Frank Mele, Porsha Williams from “The Real Housewives of Atlanta,” “Selling Sunset” star Chrishell Stause, comedian Kevin Hart and Australian model Miranda Kerr. The company said these livestreams generated more than 100 million views but didn’t emphasize how much in sales they generated.

A report from The Information paints a different picture: It said some videos of some of its top influencers failed to fetch more than 4,000 live viewers. Amazon is not the only one struggling with live commerce. Earlier this month, Financial Times reported that TikTok is scaling back its plans for live video shopping in the U.S. and Europe.

After publishing this story, Amazon reached out to clarify that a bug in its system capped the count of livestreaming users.

“We discovered an error in our concurrent view reporting which caused the livestream badge to incorrectly cap at 3,700 views. In fact, our top Amazon Live Prime Day stream peaked at 57,000 concurrent views,” a company spokesperson said. 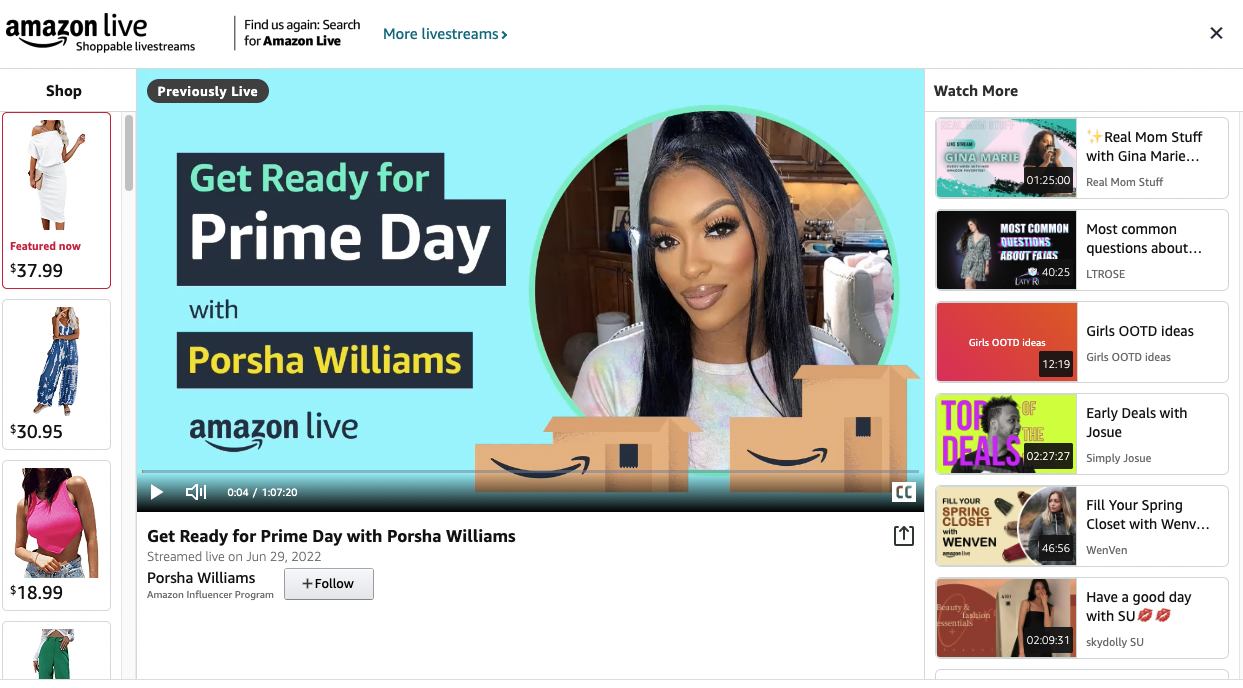 Because Amazon doesn’t disclose its Prime Day sales numbers, we have to rely on analysts and third-party data to paint a picture of how the event’s sales fared.

Analysts estimated that Amazon sold gross merchandise of anywhere between $12.09 billion to $12.59 billion from Prime Day sales globally. It’s important to note that some countries like India, Saudi Arabia, Egypt and the United Arab Emirates have yet to host Prime Day sales.

In addition, a report by Salesforce noted that global sales for retailers selling goods on their own sites grew by 8% year-on-year for Tuesday and Wednesday in the second week of July. But sales figures for non-Amazon sites globally dipped by 12% compared to Prime Day 2021.

As usual, major U.S.-based retailers took advantage of Amazon’s Prime Day to offer their own discounts, encouraging consumers to splurge more in an inflation-driven market that has seen prices of different items go high in recent times.

In addition, data group Numerator published its own study based on nearly 59,000 Prime Day orders and a survey from more than 4,800 buyers, which said the average order size was up from $44.75 last year to $52.26 on Prime Day sales. It noted that 65% of shoppers who made purchases on both days spent the same or less amount than last year.

These studies indicate inflation has affected Prime Day sales and retailers might not have seen a major boost in their sales as compared to the last year.

Amazon has had a tough year, as its share prices have dropped from roughly $181 a year ago to $110 at the time of writing. It’s important for the company to drive sales, so much so that it might hold another Prime Day later this year. This year, the company’s workers have also raised questions about workplace safety and wages during the Prime Day sales rush.

July 17, 10:30 AM IST: Updated the story with Amazon’s comment about the livestreaming user count.