Deep tech and D2C have very little in common, except Noah Kraft. The Doppler Labs founder, who first came into the spotlight in 2014 with the launch of a wireless earbuds company, is teaming up with his brother to start something brand new. Well, for clarity’s sake, the brother duo are actually disrupting something relatively ancient.

The idea for Wonderbelly, an FDA-regulated OTC antacid, came directly from Lucas Kraft, Noah’s brother. He suffered with bulimia at a younger age and, after spending nearly a decade struggling with gastric issues, doctors said the best way to deal with the fallout was to take antacids every day.

In 2020, at the height of the pandemic, stress levels were through the roof, and there was a rise in demand for antacids.

Also in 2020, Zantac, one of the top antacids on the market, was recalled because a lab found that the name-brand drug and its generic equivalents contained a cancer-causing compound.

“I start seeing news reports that if you have Zantac, throw it out immediately,” said Lucas Kraft. “Of course, this doesn’t actually help my stress at all. So I start to scramble, grab my Tums, grab everything, and start looking at the back label. What else is in this stuff that I’m taking? I’m trying to lead a healthier lifestyle and I’ve successfully recovered from an eating disorder but I really I do want to stick by a lifestyle that I’m proud of.”

He realized that there were a handful of questionable ingredients in the Tums he took every single day. One was talc, a binding agent that doesn’t actually serve to relieve any pain or discomfort, but is an incredibly cheap way to get active ingredients where they’re going.

“I know what talc is because there’s a $30 billion lawsuit against Johnson & Johnson right now over a claim that talc causes cancer,” Lucas explained. “And they’re all these other ingredients — titanium dioxide, ammonium hydroxide. All of these things that weren’t the active ingredient and weren’t actually going to help my symptoms, and if anything, they made me worried about what news stories would come out next.”

Lucas sat down with his brother Noah and they discussed the market opportunity here.

Wonderbelly is an FDA-regulated over-the-counter product that is 100% plastic-free, and the company claims it uses healthier ingredients than Tums. Wonderbelly Antacid is non-GMO and vegan, and includes ingredients like calcium carbonate, vegetable cellulose, vegetable stearate, maize starch, sucrose and natural flavors.

Lucas and Noah didn’t build Wonderbelly all on their own. They surrounded themselves with a team of experts, including Sovereign Pharmaceutical veteran Johanna Hunter (now VP of Product and Manufacturing at Wonderbelly), as well as several top gastroenterologists as advisors.

The company launched to the public in June 2022 and has today announced the raise of a $3.375 million seed round led by SLOW, Brand Project and Elizabeth Street, with strategic investment from Luke Sherwin (Casper), Greg Sewitz and Gabi Lewis (Magic Spoon), Justin Gold (Justin’s Peanut Butter Cups) and Noah’s former partner in Doppler Labs, Fritz Lanman.

In the first two weeks, Wonderbelly saw more than 1,000 customers. 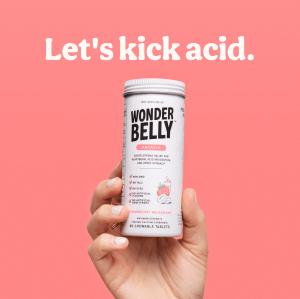 For now, Wonderbelly is focused on building a strong D2C brand, but has every intention of infiltrating retail shelves. After all, antacids aren’t often purchased online. To build that strong online brand, Wonderbelly is aiming to not only play to the younger demographic with catchy copy (“Let’s kick acid.”), but to build a community around digestive health issues in an open, honest way. Brands like Roman and Hims & Hers have seen tremendous success doing the same thing.

Antacids are just the beginning, according to the Krafts, with plans to get into other OTC medications in the future.