Voyager Digital, a high-profile crypto broker, has filed for bankruptcy, citing market volatility and the surprising collapse of Three Arrows Capital, just weeks after it suspended withdrawals, trading and deposits on its platform.

The U.S.-headquartered firm — and its two affiliates — said in a Chapter 11 bankruptcy filing in the Southern District of New York that it had between $1 billion and $10 billion in assets and more than 100,000 creditors.

Voyager Digital owed $75 million to Sam Bankman-Fried’s Alameda Research, which recently threw the broker a lifeline of $485 million, and about $960,000 to Google, it disclosed in the filing (PDF). Voyager did not name other firms to whom it owes money.

“Voyager’s platform was built to empower investors by providing access to crypto asset trading with simplicity, speed, liquidity, and transparency. While I strongly believe in this future, the prolonged volatility and contagion in the crypto markets over the past few months, and the default of Three Arrows Capital on a loan from the company’s subsidiary, Voyager Digital, LLC, require us to take deliberate and decisive action now,” wrote Stephen Ehrlich (pictured above), chief executive of Voyager, in a press release.

“The chapter 11 process provides an efficient and equitable mechanism to maximize recovery” he added. 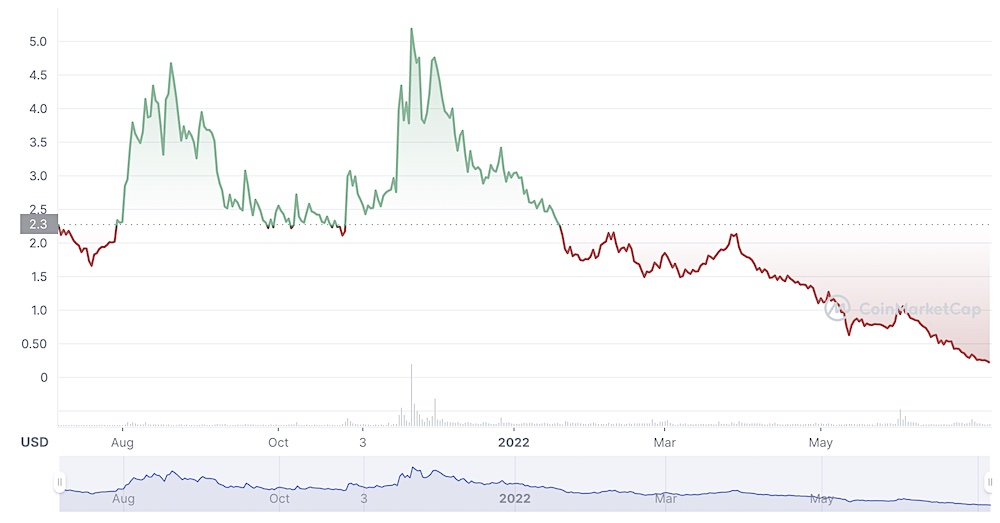 The price of Voyager token over the past one year. (Data and image: CoinMarketCap)

Three Arrows Capital (3AC) owed a number of firms large sums of money. Crypto lender BlockFi, which had an exposure to 3AC, too, scrambled to remain solvent after the collapse of the hedge fund and agreed to be acquired by FTX’s U.S. arm for up to $240 million last week.

“Voyager is actively pursuing all available remedies for recovery from 3AC, including through the court-supervised processes in the British Virgin Islands and New York,” Voyager said in the press release.

The shares and token value of Voyager plummeted on the news.

“During the reorganization, we’ll maintain operations. We intend to certain customer programs without disruption. Trading, deposits, withdrawals and loyalty rewards on the Voyager platform remain temporarily suspended,” Ehrlich said in a tweet.