Testing new satellites and space-based technologies has never been easy exactly, but it definitely could be easier. Slingshot 1, a 12U CubeSat mission just launched via Virgin Orbit, is an attempt to make building and testing a new satellite as easy as plugging a new keyboard into your computer.

To say it’s “USB for space” is reductive… but not wrong. The team at the Aerospace Corporation that designed the new system makes the comparison itself, noting that the military has made several attempts to create just this with the Space Plug-and-Play Architecture (SPA), which became the Modular Open Network ARCHitecture (MONARCH), and the Common Payload Interface Standard (CoPaIS). But the approaches haven’t taken off the way, say, the CubeSat standard has — which, by the way, Aerospace also pioneered.

The goal of Slingshot 1 is to create a standard satellite bus that’s as adaptable and easy to use as USB or ATX, using open standards but also meeting all the necessary requirements for security, power and so on:

[Slingshot] offers more agility and flexibility in satellite development through the use of modular, plug-and-play interfaces. These interfaces leverage open-sourced systems to avoid proprietary lock-ins that may stall development, as well as standardized interfaces for payloads that would not require a customized satellite bus. These interfaces set the power, command, control, telemetry, and mission data that may be required for payloads. Without a set of common standards, these payload-to-satellite bus requirements are driven by varying satellite bus manufacturers. Slingshot eliminates this uncertainty by reducing the number of requirements and complexity in the interface and creating an open payload interface standard called Handle.

How will it avoid the common trap encountered by would-be standard-standardizers, immortalized by XKCD: now there are N+1 standards?

Well, leaving aside the pretty deplorable state of standards in the satellite world, if there can be said to be any, the team decided to base the whole thing on Ethernet, which underpins a huge amount of networking in the world already.

“Basing the Handle standard on Ethernet builds on the vast ecosystem of hardware and software tools developed for that very common interface, essentially taking the most common terrestrial system standard and migrating it for satellite use,” said Dan Mabry, senior engineer specialist at Aerospace. “We’ve tailored the network for low power, but still support gigabit per second communications between devices with no custom software development required to tailor the network for each new application.”

And as he put it when Aerospace wrote up Slingshot for its own purposes last year: “When a payload plugs in it’ll instantly be recognized and work, and any broadcast data will get to the spacecraft downlink without any tuning or tweaking of the software onboard. Furthermore, because it’s an onboard network, that payload’s data is seen by all the other payloads as well. Payloads can easily collaborate in real-time, and distributed smart sensors and processors are coupled by the basic architecture.”

Combine this with a power hub that can intelligently supply a variety of needs, and a modular enclosure that makes the whole thing look like the back of a well-organized gaming PC, and you’ve got a recipe for plug and play that really makes things easy on the prospective designer. 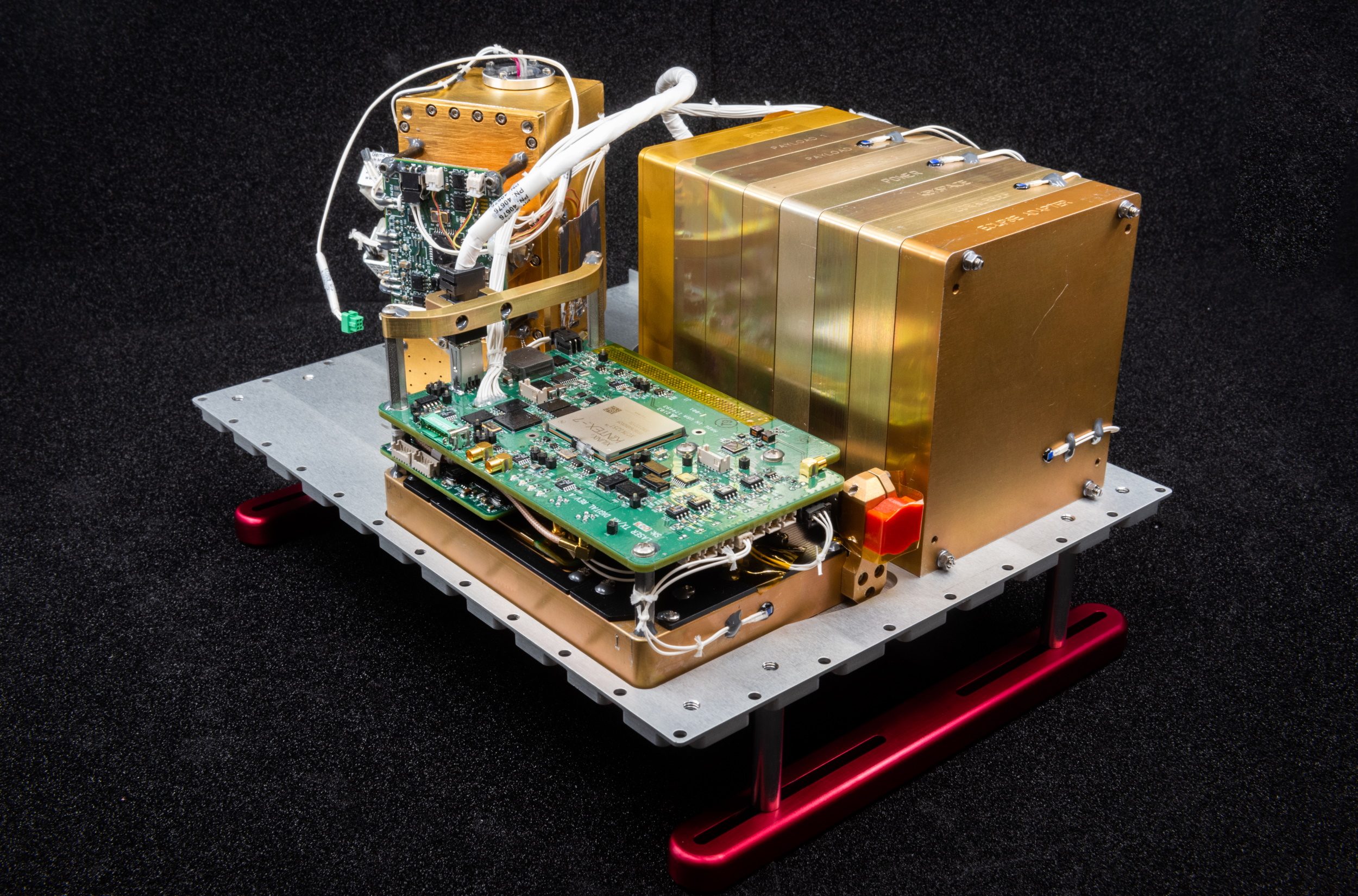 As Slingshot’s program manager, Hannah Weiher put it: “It’s working to reduce interface complexity and support different satellite buses and payloads with minimal to zero adaptation needed to the interface. Handle was key to a streamlined payload integration process on Slingshot 1 where we had a wide range of payloads with different requirements and it enabled us to be able to integrate the volume of payloads we did in a satellite about the size of a shoe box.”

Of course it’s not enough to simply send up a bare-bones interface — imagine sending up a PC case with nothing in it. To see if it works, you need stuff attached, and fortunately there are a ton of experiments and capabilities Aerospace has been saving up since Slingshot’s genesis in 2019:

Some of these are more or less self-explanatory, like t.Spoon’s various components, making up the core mechanical elements tying the whole thing together. And of course you need a nice software-defined radio downlink. But a tensor processing unit and machine learning testbed on a satellite? Internet of Things protocols? Cryptographic services?

When I talked with the team during a visit to Aerospace’s labs a while back, they talked about how a lot of what’s on Slingshot is unprecedented in some ways, but is more about adapting common terrestrial tasks to the extremely formalized and limited context of a satellite’s hardware and software.

Say you have three or four payloads sharing a processor and storage. How do you make sure their communications remain secure? The same way you would on the ground, but adapted to the lightweight processing, limited-power, unusual interface of a spacegoing craft. Sure, secure processing and communications in space have been done before — but it’s not like there’s a plug and play version where you can just click a check box and suddenly your payload is fully encrypted.

Similar is ExoRomper, which has an externally mounted camera hooked into the TPU. There’s been a bit of AI in space already, but never a setup where you can say: oh sure you can add on cloud recognition to your satellite, it’ll take up 2 watts, 20 cubic centimeters and 275 grams. This one in particular is set up to watch the satellite itself, looking at lighting conditions — something that seriously affect thermal loads and power handling. Why shouldn’t your satellite have its own satellite, watching to make sure there’s no hot spots on the solar cells?

Data will be coming in from Slingshot as it tests out its many components and experiments over the coming months. It could be the start of a new modular era for small satellites.