Storytelling platform Wattpad is introducing a new creator program for writers that can earn them up to $25,000 in compensation. The company is also debuting a new metric called “Engaged Readers,” to help writers gauge readers’ interest in their stories, and Wattpad Creator Portal, a new site for writers to get tips and tricks about improving their content for the platform.

There are strict guidelines to be eligible for the payout program. Writers must have had a completed novel-length story (50,000 words or more) and they must have published at least one story chapter in the last three months.

Writes must also have at least one story in eligible genres like general fiction, romance, vampire, action, teen fiction and horror, with a minimum number of Engaged Readers for that genre. The criteria for Engaged Readers vary from 9,000 for general fiction to 100 for horror. While authors can tag genres for their stories themselves, a team of experts vets these tags for the new program so the story can be categorized as one of the eligible genres.

The company counts an Engaged Reader as someone who has spent more than five minutes on a story in the last 365 days. Wattpad also has other metrics like Total Reads, which is to measure the number of all-time non-unique reads on a story, and Unique Reads, which is the daily read or view by a unique user over 30 days. 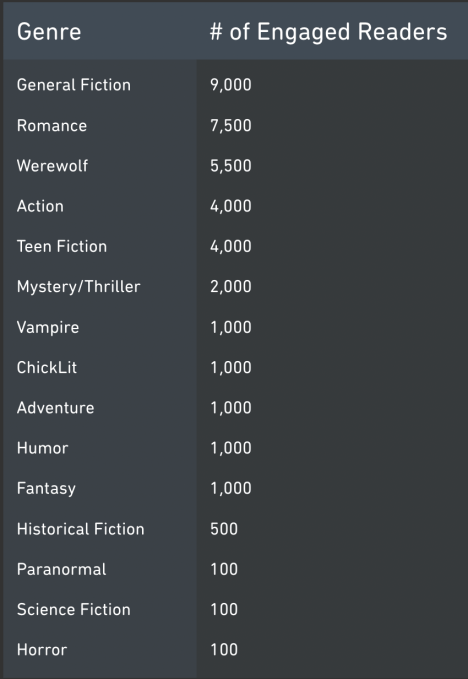 Wattpad is not the first platform to try this kind of metric for paying creators. In 2019, Medium introduced a similar strategy by measuring read time on a post and paying writers accordingly.

The company has been testing the Engaged Readers feature with a few writers to gauge what kind of users are reading stories for a longer time. It claims that users spend more than 23 billion minutes per month on the platform reading various stories, so this new feature will give it more insights into where readers are spending more time.

“As webnovels continue to grow in popularity around the world, we are going to continue building new tools for writers to do their best work, grow their fandoms, and ultimately make more money from their stories. Engaged Readers is the first step in a number of new initiatives we’re planning for 2022 and beyond. We’re helping grow the global webnovel market alongside our authors, creating more opportunities for writers to grow their fandoms and monetize their work,” the company said in a statement.

Wattpad president Jeanne Lam told TechCrunch that when you compare this to traditional publishing, a bookstore can tell you how many copies are sold, but they can’t tell you if the buyer read that book.

“The Engaged Readers feature gives writers a new metric to actually understand how people are interacting with their stories in the past year,” she said.

The Wattpad Creators Program is currently rolling out to English-language writers, with the Philippines and Spanish-language markets arriving next. The company is targeting to include up to 3,000 writers in the program this year.

Lam specified that all writers included in the program will get editorial support, coaching for marketing and audience building, access to special writer tools and partnership discounts, and opportunities to work with brands. Wattpad also wants to give more insights to writers as to what kind of stories and plots are working well on the platform. However, not all writers will earn stipends, and there are different levels to reach the figure of $25,000.

“We’re building a creator economy, for authors, and investing in diverse writers from all over the world. And one of the things that we know to be true is how much our creators want to thrive on Wattpad.  So one of the most valuable things we can do is support them through a significant investment across their entire writing journey, which is something that we can be proud of with this program that we’re launching,” Lam said.

She mentioned that even if a writer doesn’t qualify for the program, they can learn more about different opportunities and techniques to improve their writing through the new Wattpad creator Portal.

Along with this, to make its platform more attractive for readers, Wattpad will launch exclusive stories from some marquee writers. These writers include romance author Tamara Lush, who wrote Drive and Crash; Jessica Cunsolo, author of the With Me series — which has over 1 billion reads on the platform with a TV series adaptation in works; Kate Marchant, writer of the novel and upcoming Robbie Amell-produced film Float; Sondi Warner, the author of fantasy novel Lead Me Astray, with more than 260,000 reads; and Claudia Tan, author of Perfect Addiction, another novel that’s being converted into a feature film by Wattpad Webtoon Studios.

The company claims that 1,500 stories on the platform have been converted into different kinds of movies and published books.

Last year, Medium revamped its creator program with referral bonuses, apart from relying on how much time a reader spent on the story. Other rival platforms like Ghost, Scribd, and Substack focus on the number of paying subscribers to distribute the money amongst writers after taking a cut. Facebook also launched a new platform to support independent writers called Bulletin last year.

However, Wattpad wants to stand out by supporting webnovel writers by offering them multiple ways to make money: paid stories, brand partnership, potential book and movie deals, and now, a new creator program.

The story was updated to include clarification from Wattpad that 94 million users number is it’s the size of the total community and the firm doesn’t disclose monthly active users.