Opaque Systems, a startup developing what it describes as “AI for confidential computing,” today announced that it closed a $22 million Series A funding round led by Walden Catalyst Partners with participation from Storm Ventures, Thomvest Ventures, Intel Capital, Race Capital, The House Fund and FactoryHQ. The new cash brings Opaque’s total raised to $31.6 million, which co-founder and CEO Rishabh Poddar says is being put toward product development and doubling the size of the team to close to 100 employees by the end of the year.

Confidential computing protects data by performing computation in a hardware-based component called a trusted execution environment (TEE). TEEs aim to prevent the unauthorized modification of the data while it’s in use, delivering an elevated level of security. In recent years, the adoption of confidential computing technologies has accelerated, with major tech companies including Intel, Google, Microsoft, Arm and Red Hat founding an organization — the Confidential Computing Consortium — to advance data protection standards.

At least one firm anticipates that the confidential computing market will be worth $54 billion by 2026. Gartner predicts that by 2025, more than 50% of organizations will adopt privacy-enhancing computation, including confidential computing, to process sensitive data and conduct analytics.

Opaque was founded by University of California, Berkeley professors Raluca Ada Popa and Ion Stoica, the co-founder of Databricks, as well as UC Berkeley graduates Rishabh Poddar, Wenting Zheng and Chester Leung. The team built the technology during their work on the MC2 (Multiparty Collaboration and Competition) open source project at UC Berkeley’s RISELab, when they received early access to Intel’s SGX platform. (SGX provides developers a way to partition their code and data into Intel CPU-hardened TEEs.)

“The industry collaborators of RISELab started adopting MC2 and were requesting features, such as 24/7 support for production, graphical user interface, and other enterprise-ready tools, which are not suitable to develop or provide as part of research,” Poddar said. MC2 is a collection of packages that enables data owners to perform analytics and jointly train AI models on the collective data without revealing their individual data to each other. “It became very clear that there is a strong and widespread need for the MC2 technology in practice.” 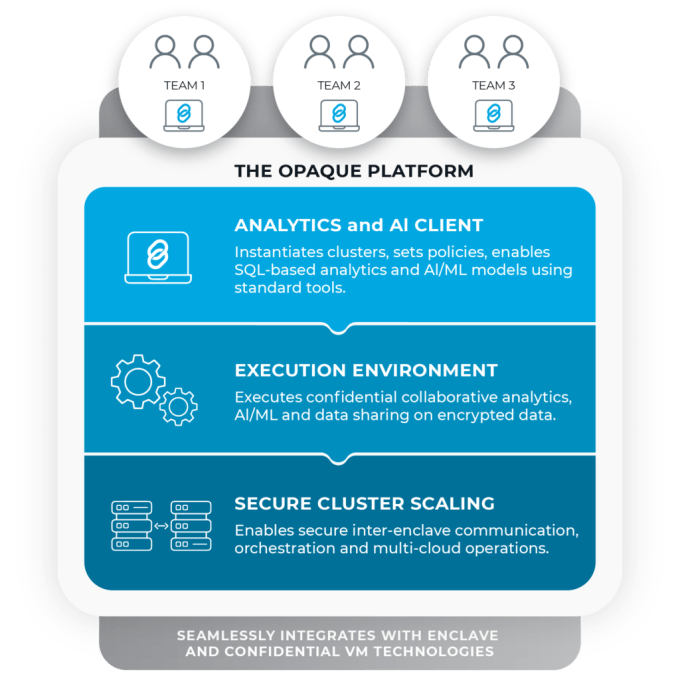 Opaque allows customers to train their models in a public cloud on a dataset that’s encrypted during the training process. Users can upload data or connect to disparate sources, setting policies to govern data and computation and establishing confidential workspaces across teams. Opaque can join encrypted datasets without exposing data, Poddar says, and apply analytics on encrypted data.

“Collaborative learning across teams in enterprises is a big use case. For example, many financial institutions cannot even match the same customer data across the data sets from different teams, such as the credit card team, debit card team, accounts team, or others because of the confidentiality of this data,” Poddar said. “Opaque protects and encrypts data while in use, in memory, and during computation. Neither Opaque nor the cloud provider can see the unencrypted data of the customers, which is how the platform enables sharing of encrypted data across multiple parties securely without violating the data’s confidentiality.”

But perhaps owing its founders’ connections, Opaque has managed to build a customer base that includes banks, financial institutions, and large healthcare providers. Poddar says that they’re using the platform to monitor transactions for money laundering and share patient information during clinical trials, among other applications.

“The industry faces significant security and technical challenges with confidential computing in particular that have inhibited organizations from achieving faster value from encrypted datasets. This means an inability to derive key insights from data that is locked up in data silos, adding yet another layer of difficulty to the distributed and disparate data challenge,” Poddar. “This new funding gives us sufficient runway to be more aggressive with R&D and recruiting in the present downturn and the looming recession. We see the opportunity to take advantage of the current economic conditions with an aggressive stance that will make us well-positioned to weather potential headwinds.”