Grocery store shelves, both online and in-store, are full of plant-based products created to be dairy substitutes. Oakland-based Eclipse Foods doesn’t want its sustainable, plant-based dairy products to be just another substitute; they want it to be so similar to conventional dairy in taste, texture and functionality that you won’t be able to tell the difference.

Co-founders Aylon Steinhart and Thomas Bowman believe Eclipse Foods has come a long way since its 2019 origins. Steinhart, CEO, is an alternative protein expert who was previously with the Good Food Institute, where he incubated dozens of startups within that space. Bowman, CTO, is a James Beard–nominated chef and has a food science background. Prior to Eclipse, he was director of R&D and product development at Hampton Creek, now known as Eat Just.

Steinhart told TechCrunch that many of the plant-based products out there are meeting consumers’ needs. Those like Impossible and Beyond Meat are no longer simply substitutes or random replacements for meat, but are appealing to mainstream consumers. However, the dairy industry hasn’t found that same traction yet among the myriad options of plant-based or lactose-free products.

“In dairy, no one has created a true dairy replacement, just substitutes,” he added. “Therefore, we’re tackling a $500 billion dairy market. The fun fact is that 70% of the world’s population is lactose intolerant. We will be able to capture a lot more market share and a lot more dollars by bringing in something that everyone can tolerate. It’s giving optionality to consumers.”

The proprietary technology uses micelles, which Steinhart called “the microscopic magic of milk,” to create the replacement plant-based dairy products, but that don’t sacrifice on taste, texture or functionality.

The microscopic structures are made up of the casing protein within dairy milk, but Eclipse figured out how to get plants, like cassava, corn and potato, through the mechanical process to mimic those micelles. With it, the company can create many products like ice cream, cream cheese and butter.

In the past 12 months, Eclipse has grown its retail presence by 2,100%, striking partnerships with stores like Whole Foods Market, Albertsons and Vons, as well as direct-to-consumer via Gopuff, Good Eggs and Gorillas. The ice cream can also be found in food service locations, including Afters Ice Cream, the LA Dodger Stadium, Original Mels and Silver Diner.

This month, the company’s ice cream mix became the base for Smashburger’s new nondairy milkshakes, representing not only “the first nationally available non-dairy milkshakes at a fast-casual restaurant chain,” but also the first plant-based menu item for Smashburger, Steinhart said. You can get it at one of over 200 locations across the country.

“We are extremely excited,” Steinhart said. “It is also kind of a testament to the strategy of going after dairy consumers because Smashburger is mainstream. Consumers who dine at Smashburger are not necessarily people who are looking for substitutes on a regular basis. I tried both side by side, and I could not tell which is which so we believe that there is a future in which chains will say, ‘Why do we need dairy if this tastes just as good and it appeals to way more people?’” 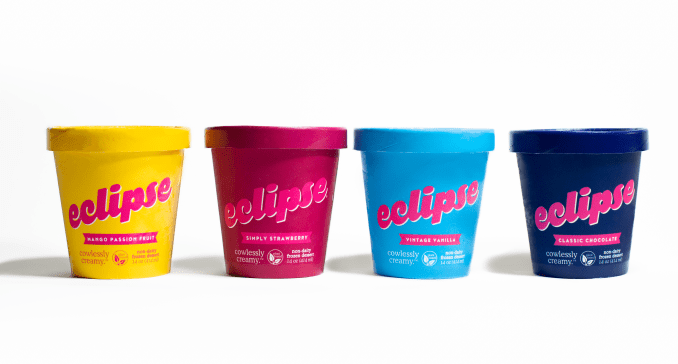 The global dairy alternatives market is forecasted to be a $50 billion business by 2028, and Eclipse is one of many startups entering this sector with various approaches. In addition to the dairy industry itself, Steinhart believes companies like Oatly are a main competitor because its products are spanning across different product categories like milk and yogurt.

Others are going after the ice cream space, too, and getting funding as well. The Urgent Company has its Coolhaus product of plant-based ice creams. Late last year, Swedish food tech company N!ck’s raised $100 million for its ice cream product. Meanwhile, Brown Foods took in just over $2 million to get its dairy alternative technology ready for scale.

Eclipse aims to go further than ice cream, and a new cash infusion of $40 million in Series B funding, closed this week, will power that growth in both retail and food service and will accelerate its R&D so it can develop more products.

The round was led by Sozo Ventures with participation from Forerunner Ventures, Initialized Capital and Gaingels. The company is now valued “in the hundreds of millions,” and puts total funding to date at over $60 million, Steinhart said.

The new funding enables the company to expand its team of 45, including 25 full-time employees, develop some go-to-market strategies and get its R&D to a place where it can scale different products. The company is able to scale quickly now because it is running its products on traditional dairy lines in a “plug and play” approach that doesn’t require introducing new equipment.

“Brand trust is so important because the data shows that the No. 1 reason that people avoid plant-based dairy today is taste,” Steinhart said. “Some people don’t really trust plant-based dairy products. What Thomas and I set out to do, and I think we’ve achieved it, is to create ice cream that is one of the best ice creams that someone has had, plant-based or not. That way, they are going to trust us next for their cheese or yogurt.”