Integration platform AI Squared announced today the closing of a $6 million seed round led by NEA with participation from Ridgeline Partners.

Launched in 2021, AI Squared helps companies adopt artificial intelligence by using a low-code platform to integrate it into existing applications in a timely and straightforward manner. Its founder, Benjamin Harvey, was inspired to start the company after a decade at the U.S. National Security Agency, where he saw how it and other organizations struggled to adopt artificial intelligence into existing applications.

The struggle came from what’s known as the last-mile challenge, which refers to the costly and time-consuming process of implementing an AI model within an application used on a day-to-day basis, like Netflix’s program recommender system, he told TechCrunch.

AI Squared helps solve the last-mile problem, assisting companies in adopting AI by using a low-code platform to integrate it into existing applications.

Harvey said he only pitched a handful of investors before securing the seed round, and the fundraising process lasted just three months. The company plans to use the money to mature the product to prepare for the community and enterprise editions of the platform. It will also help expand the engineering team, build a sales group, add marketers and expand community relations.

Ultimately, the company is gearing up for a Series A in hopes of becoming the next unicorn. Six out of the 600 unicorns created last year had a Black founder (which is 1%). But Harvey is hopeful that with ongoing success and networking, his company will continue on its journey. AI Squared already has a cooperative development and research agreement with the NSA, a contract with the Johns Hopkins University Applied Physics Lab and is partners with Databricks, Vanguard, Tableau, Salesforce, Nvidia and Microsoft.

“As Black founders who are learning this complex environment for the first time, we need to build networks of technical executive communities that will act as our lifeline,” Harvey said. “That will ultimately open doors for [us as] the next generation of Black founders.”

Harvey has come a long way from where he started. Growing up in Jacksonville, he never thought about becoming an entrepreneur and said most of his childhood centered on finding a better place to live. He recalled watching his parents file taxes and noted they only earned a combined $13,000 a year. This stood in addition to the fact that Jacksonville is the murder capital of Florida; Harvey had to focus on surviving, taking it one day at a time.

“Most folks from backgrounds like mind end up in jail, dead,” he said, adding that the city was called “Jack and Kill” growing up. “I was always scolded for being ambitious; I did not feel fully free to create and harness my ambition.”

Today, Harvey is a three-time HBCU (historically Black college or university) graduate, having studied computer science as an undergrad at Mississippi Valley State University before obtaining a master’s and doctor of science degree at Bowie State University.

He then went on to work at Harvard and MIT’s joint Health Sciences and Technology program, where he studied everything from applied machine learning and algorithms to cancer genomics datasets. 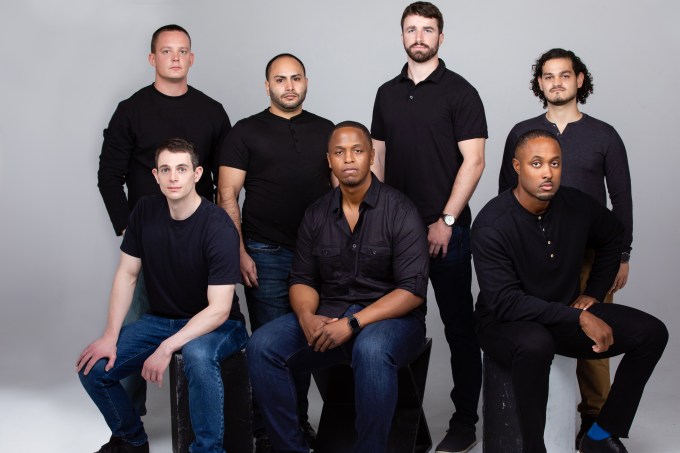 After receiving his term sheet last year, Harvey gave up total ownership of the company to give equity to those who helped him build it. Image Credits: AI Squared

After 10 years at the NSA and a stint as its chief of operations, Harvey joined the software company Databricks as a sales engineer in hopes of learning more about incubated technology.

“We were drawn to this area of trying to bridge the gap between what people can imagine they would like from their software systems and what they can build,” Papadopoulos told TechCrunch. “The idea of low-code, no-code, as applied to AI, was also very appealing to us.”

Ridgeline Ventures Partner Andrew McMahon added to that. “AI Squared is that rare combination of a great product and top-tier team,” he told TechCrunch. “We also see potential in the product to improve bias, error and performance of models by involving users and subject matter experts in the model improvement cycle.”

TechCrunch previously reported that open-source projects are popular right now with investors, and AI Squared is no different. Harvey said he’s using open-source software (OSS) and an almost “freemium” version of AI Squared technology to build a community and network with organizations that could lead to bigger enterprise deals and more customer acquisition.

Shortly after Harvey received his term sheet in the summer of 2021, he diluted his total ownership stake in his company to give equity to the team that helped him build AI Squared’s software. He also gave them all a “co-founder” title as a way to reward them for supporting him early on.

Part of his mission remains to inspire and educate other young Black boys growing up in places like he did, who may or may not know all the paths one can take in life. Out of everything he’s ever done, he said this is the first time he’s felt fully free to harness his ambition — and it’s time for others like him to feel the same.