Zomato has acquired Blinkit, a struggling 10-minute grocery delivery startup, in a $568.1 million all-stock deal as the loss-making food delivery firm looks to broaden its offerings at a time when its shares are trading far below last year’s debut price and less than half of the all-time highs.

The Gurgaon-headquartered firm — which reached an agreement to acquire Blinkit earlier this year, TechCrunch previously reported — said on Friday its shareholders have approved the deal (PDF). The deal marks a significant value erosion in Blinkit, which became a unicorn a year ago and had raised about $700 million mostly against equity. When the two firms agreed for an acquisition earlier this year, they had valued the deal between $700 million and $750 million, TechCrunch earlier reported.

The acquisition comes as a relief to Blinkit, which struggled to raise funds from new and most of its existing investors for several quarters.

The SoftBank-backed startup, which was formerly called Grofers, pivoted to instant grocery delivery last year. Blinkit shut many of its dark stores and scaled down the business in many cities earlier this year and pledged to focus more aggressively on 10-minute grocery deliveries. The startup said if its orders can’t reach the customers in 10 minutes, it will not serve in those cities.

In Blinkit, Zomato will find a partner that can help fuel its instant grocery delivery play — or grocery altogether, two areas Zomato has previously attempted to sink its teeth in but failed each time.

“Quick commerce has been our stated strategic priority since the last one year. We have seen this industry grow rapidly both in India and globally, as customers have found great value in quick delivery of groceries and other essentials. This business is also synergistic with our core food business, giving Zomato the right to win in the long term,” Zomato chief executive Deepinder Goyal said in a statement.

Blinkit competes with younger and heavily backed firm Instamart of Swiggy, which also counts SoftBank among its investors, and YC Continuity-backed Zepto. Zomato, a much older firm than all the other aforementioned names, competes with Swiggy, which in the private market has more than twice the valuation of Zomato.

Swiggy, which is looking to go public next year, said earlier this year that it will invest $700 million in its instant delivery service, called Instamart.

Many investors had questioned Zomato’s decision to acquire Blinkit and expansion into the instant grocery delivery space, analysts at HSBC said in a report to clients earlier this month. The analysts, however, made a case for why the acquisition is necessary for Zomato. 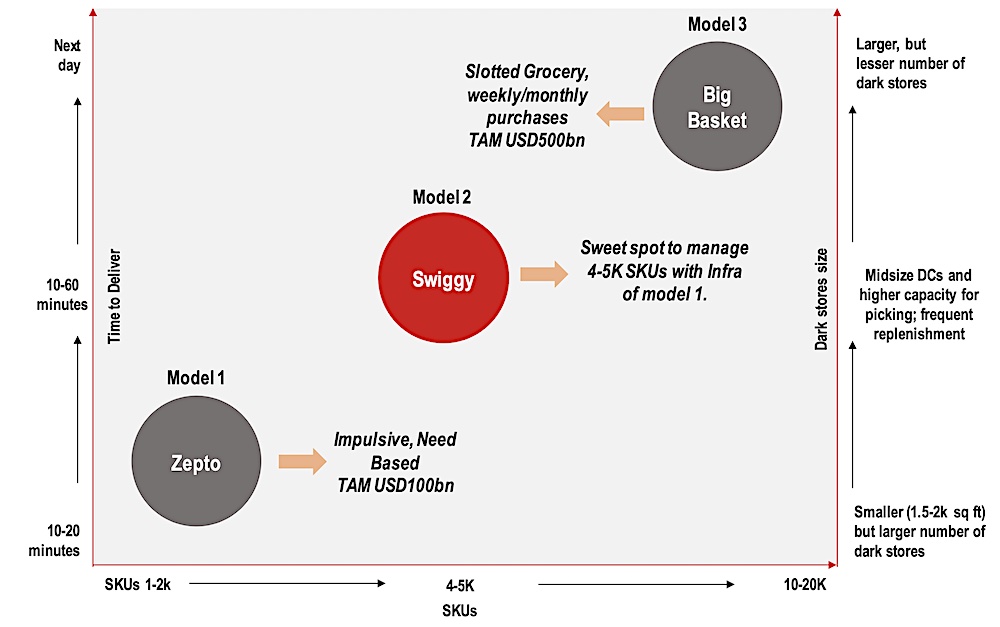 “There are broadly three models of grocery delivery business. On one extreme is quick-commerce (10-15-minute delivery), with highly constrained SKUs (1,000-2,000) and on the other extreme is a full kitchen offering (delivery next day) with 25,000-30,000 SKUs. The former are “instinctive” purchases, while the latter are planned. Theoretically, instinctive purchases are less discount driven and more need driven, while planned are more discount and assortment driven. Somewhere in the middle are 4,000-5,000 SKUs, which cater to both ends with certain benefits and compromises for both instinctive buyers and planned buyers,” they explained.

“In our view, Zomato has to attempt to build its grocery business closer to the middle of this framework and leverage technology to design and manage its dark stores so as to offer 4,000-5,000 SKUs with 10-60-minute delivery TAT. Cross-selling to Zomato’s customer base, integrating the tech stack and building fulfillment infrastructure (as above) are top priorities for Zomato to build a successful grocery business, in our view.”

Zomato, which was already an investor in Blinkit, began conversations with the younger startup for a full acquisition last year, TechCrunch reported earlier, though at one point Blinkit chief executive Albinder Dhindsa said in a TV interview that it was not holding merger/acquisition talks with Zomato.

From our coverage last year:

The leadership teams at Grofers and Zomato have long been close friends and began exploring this investment earlier this year. Both the firms are also open to the idea of Zomato acquiring a majority stake in Grofers in the coming quarters, though a decision hasn’t been reached and won’t be fully explored until Zomato becomes a publicly traded company, the source told TechCrunch.

Zomato, which acquired Uber’s Indian food delivery business early last year, has told some of its major investors that it envisions a future where the Gurgaon-based firm has expanded much beyond the food delivery category, the source said, requesting anonymity as the talks are private.

The acquisition of Blinkit is the latest in a series of investments Zomato has made in recent quarters. It has also backed logistics startup Shiprocket, discovery platform Magicpin, fitness and well-being platform CureFit, adtech startup Adonmo, food robotics company Mukunda and business-to-business startup UrbanPiper. The startup’s cash balance at the quarter that ended in March was about $1.6 billion.