Spotify is introducing a new feature that will allow users to better discover nearby events and concerts. The streaming service today announced it’s replacing its in-app Concert Hub with a new Live Events Feed that will allow you to find favorite artists’ events in your area in a way that’s personalized to your own interests.

The update is only the first step toward a reimagined strategy around live events, Spotify says. The company notes it’s aiming to further integrate event discovery into the app in the future, which could see in introducing new search tools, playlist formats and other integrations into the app that will make event discovery an even larger part of the overall Spotify listening experience.

The new Live Events Feed continues to be powered by Spotify’s existing ticketing partnerships, which had earlier fed listings into the Concert Hub. The company works with Ticketmaster, AXS, DICE, Eventbrite, See Tickets and others to help source the event listings and direct users to purchase their tickets. 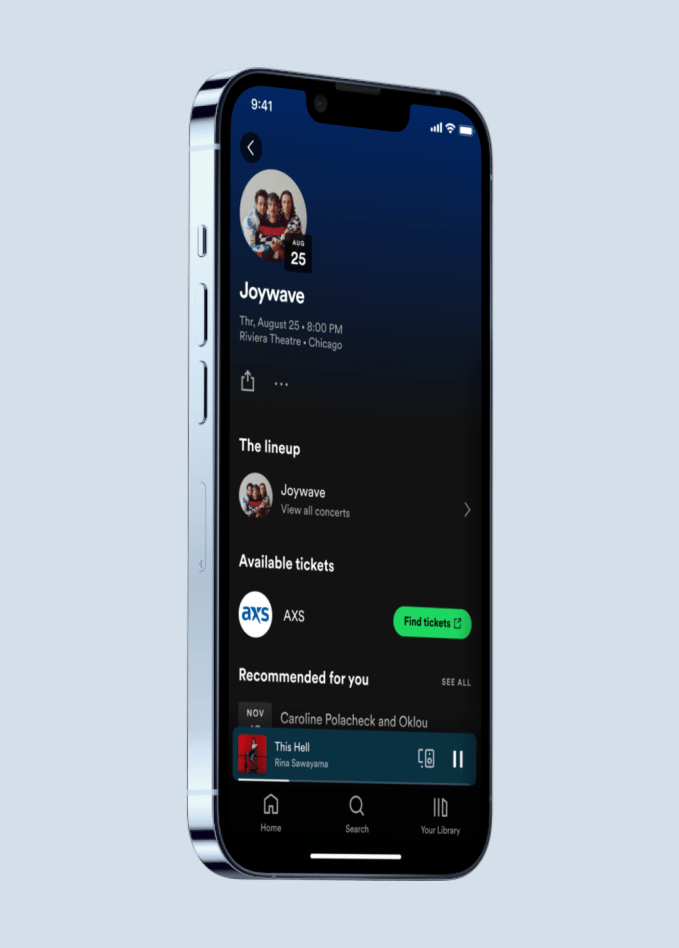 But this system wasn’t working as well as it should have been, it seems. In an interview published to the corporate blog, Spotify’s product manager for Live Events Discovery Sam Sheridan, admitted that music fans would engage with artists on its platform but would leave the Spotify app when they wanted to buy tickets or follow the artists on social media in order to get event updates. That indicates Spotify’s product wasn’t doing enough to retain the users interested in live events from using its own app to make their ticket purchases.

Though Spotify doesn’t disclose the details of its partnership agreements, this impacted its bottom line as Spotify earns affiliate commissions on the sale of tickets initiated in the app.

The updated Live Events Feed looks a bit different from the Concert Hub, the company notes. It now includes artist imagery, instead of just the calendar icon that showed the date and show information, as before. When you tap into a particular show, you can also see the concert lineup along with other event details, a link to purchase tickets and other music recommendations. Spotify says it’s also introduced a new messaging tool, which will alert fans to personalized recommendations about live events based on their listening habits. Fans can control this experience by setting their notification preferences.

In addition, when users are streaming an artist in the Spotify app who has a show coming up, this information will now be displayed in the app while listening. This will help to surface live events even to those who don’t visit the Live Events Feed itself.

The company had to shift its live events strategy during the pandemic when it shifted focus to virtual events instead. But Spotify now believes the time is right to refocus on live concerts and events, as listeners are now excited to see their favorite artists perform live again.

“Ultimately, our goal is to ensure that fans are aware of all of the upcoming events by the creators they love and creators they may come to love,” said René Volker, senior director of Live Events, in the announcement. “We believe if we get that right, then we can get more fans to more shows and help artists and venues have better-filled rooms. We’d love to be a part of helping the live music industry recover and, even more importantly to us, helping to grow it in the years to come.”