Reddit Talk, the social site’s Clubhouse-like social audio product, is rolling out a handful of updates aimed at allowing hosts to better engage with listeners. Among these is a new soundboard for audio effects and a topic selector that allows hosts to select up to three topics for their talks. It’s also testing a way for hosts to start a live show straight from their profile. The company also announced its Reddit Talk Host Program, which helps new hosts have their audio shows found, will kick off on July 11th.

The series of updates aim to further boost engagement and compete with rival Clubhouse, which currently has over 10 million users and was valued last year at $4 billion. Reddit, meanwhile, was last valued at $10 billion, but Reddit Talk is a year behind its audio-based social network twin.

However, audio programs like this may make more sense on a network where users have already developed communities rather than on a standalone audio app. This February, Reddit claimed that in three months it had seen over 250% growth in daily active listeners of Reddit Talk, but it hasn’t shared how many total users have streamed its shows. Since its debut last April, Reddit Talk has been used by over 500 moderators and hosts across Reddit’s various communities (aka subreddits).

Reddit says the soundboard feature will arrive next month to help make the experience richer and add extra emphasis to conversations, the company told TechCrunch. The soundboard could also be fun for games — Reddit Jeopardy, anyone?

The feature will be available on desktop and have a music track, plus eight sounds to start: air horn, tada, drumroll, sad trombone, applause, boing, cha-ching and ba-dum-tss. The soundboard is only available to hosts, so there will be no trolls virtually honking for attention.

A Reddit Talk topic selector will also slowly roll out this month. This new update allows listeners to discover relevant live talks that they may be interested in. The live bar on the home feed will now suggest talks of related communities that they follow. In addition, hosts will be able to reach more listeners since the update allows them to select up to three topics for their talks. 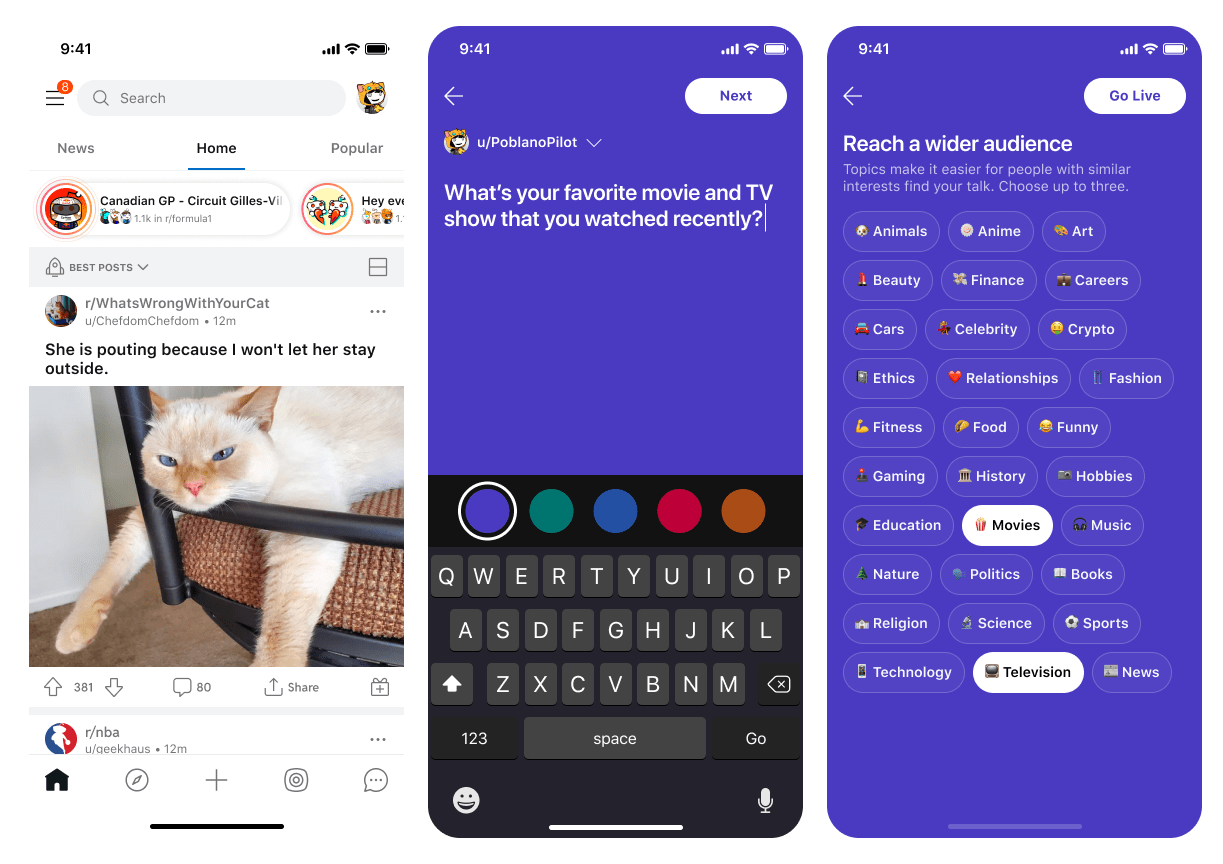 Reddit said it’s experimenting with giving select users access to host talks directly from their profiles, as well. Currently, Reddit moderators can automatically start live talks, or you have to apply to be selected as a host. Reddit is giving this new opportunity to those who have participated in Reddit Talk and have good user standing. To be selected to test out profile hosting, the user has to sign up and have their profile reviewed.

The company also announced its Reddit Talk Host Program will now start on July 11 and end on October 11. When initially announced last month, the start date was going to be June 15 and the program would end on September 15. Reddit didn’t explain why it was pushed back.

Primarily, the Host Program helps Reddit Talk show creators get their shows found. Hosts’ talks are bumped to the top of Reddit so more relevant audiences can discover and listen. In order to qualify, hosts will need to run at least four talks every 30 days (12 total talks) between July 15 and September 15. Those who have not been invited can sign up before July 1 to participate.

Reddit Talk was first tested in April 2021, and since then, has received updates such as a live audio feature for the web, recordings of past sessions, comments and emojis, and a live bar at the top of the home feed to show chats that are happening live.