You can’t discuss fulfillment robots without mentioning Amazon. Over the past decade, the retail juggernaut has become the 800-pound gorilla in the category, courtesy of several key acquisitions and seemingly endless resources. And while warehouse robotics and automation have been accelerated amid the pandemic and resulting employment crunch, Amazon Robotics has been driving these categories for years now.

This week at its annual Re:Mars conference in Las Vegas, the company celebrated a decade of its robotics division, which was effectively born with its acquisition of Kiva Systems. Over the course of its life, Amazon Robotics has deployed more than 520,000 robotic drive units, across its fulfillment and sort centers. From the outside, it’s been a tremendous success in the company’s push toward same- and next-day package delivery, and its driven the competition to look for their own third-party robotics solutions, bolstering startups like Locus, Fetch and Berkshire Grey.

Amazon Robotics head Tye Brady took to the stage at today’s event to offer a glimpse at what the future will look like for its in-house automated systems. At the heart of the news are two new robots: Proteus and Cardinal, an autonomous floor system and a robotic arm, respectively. The new robots are being integrated into the same shelf/cell system that’s been in place since Kiva.

Now, however, Proteus brings full autonomy to the floor. The company notes in a blog post,

Proteus autonomously moves through our facilities using advanced safety, perception, and navigation technology developed by Amazon. The robot was built to be automatically directed to perform its work and move around employees — meaning it has no need to be confined to restricted areas. It can operate in a manner that augments simple, safe interaction between technology and people — opening up a broader range of possible uses to help our employees — such as the lifting and movement of GoCarts, the non-automated, wheeled transports used to move packages through our facilities.

If I had to venture an educated guess, I’d say that Proteus is likely the result of the company’s 2019 acquisition of Boulder, Colorado-based autonomous cart company, Canvas. As I noted at the time, “Canvas [… ] brings its own built-in safety with its autonomous vision system. The hardware is designed to more directly interact with workers on the floor. It’s easier to imagine the company adopting the technology for some of its existing systems, as well.” 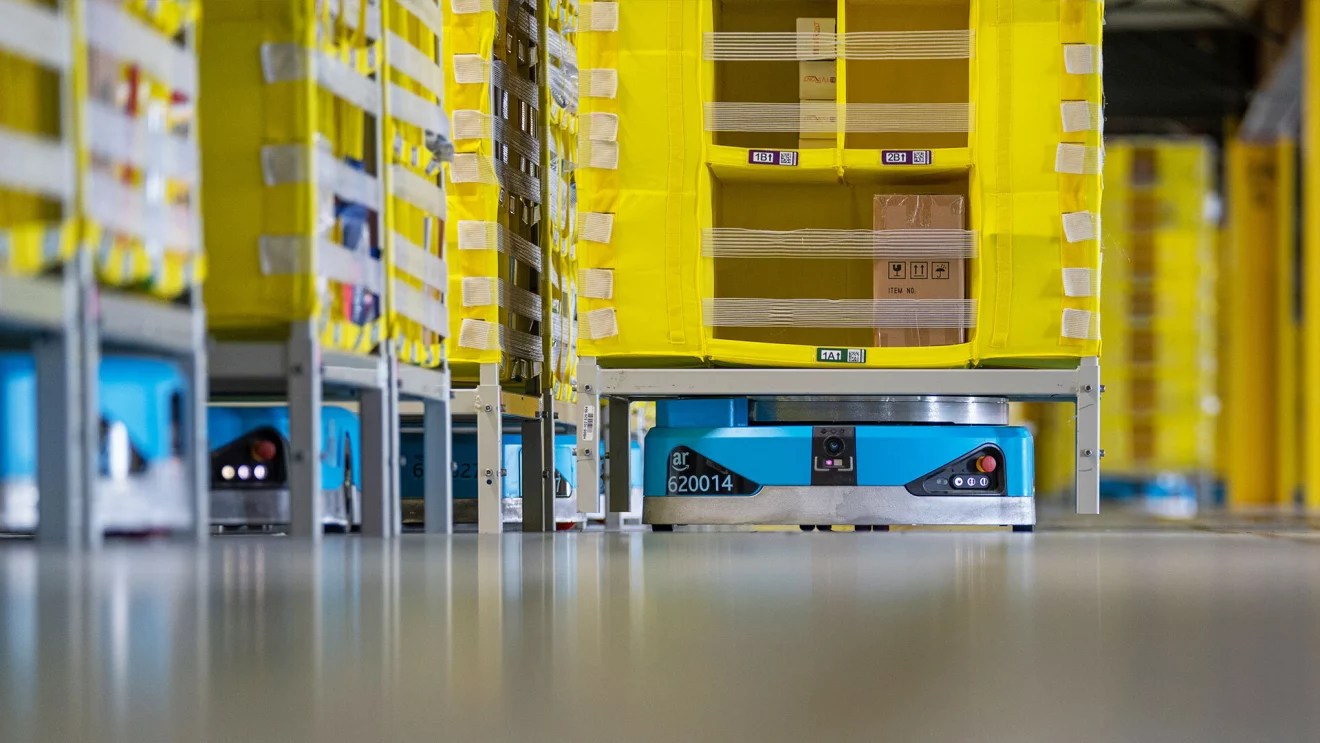 From the looks of it, some of that Canvas technology was integrated into a Kiva form factor, so these robots can work with Amazon’s existing systems with minimal retrofitting. What the additional autonomy brings is the ability to operate in less controlled environments, which means the technology can be implemented into additional environments outside of the current cages that the Kiva systems are relegated to.

Proteus will initially be deployed in the outbound GoCart handling areas in our fulfillment centers and sort centers. Our vision is to automate GoCart handling throughout the network, which will help reduce the need for people to manually move heavy objects through our facility and instead let them focus on more rewarding work.

Cardinal, meanwhile, is a robotic work cell that sorts heavy packages of up to 50 pounds during the shipping process. The company is testing a pilot of the system right now and expects to deploy into its sorting facilities at some point next year.

Also demoed on the stage today was the Amazon Robotics Identification system. The device looks a bit like an airport scanner, allowing employees to quickly input packages using “natural movements.” The company notes, “AR ID removes the manual scanning process by using a unique camera system that runs at 120 frames per second, giving employees greater mobility and helping reduce the risk of injury.”

Lastly is another arm-based picking system. It’s effectively a large, mobile, shelf-based system that utilizes the arm to retrieve containers to hand to the human employee. The company notes, “Our new Containerized Storage System puts employees in a safer and more ergonomic position through a highly choreographed dance of robotics and software.”

What’s most interesting viewing these updates from afar is the integration Amazon has managed across a range of different tasks. Of course, Amazon has the marked advantage of being able to develop its own systems for its own warehouse — that, along with its huge resources, are going to prove extremely difficult for smaller companies to keep up with.