LogRocket, a provider of software frontend monitoring and analytics services, today announced that it raised $25 million in a Series C round co-led by Delta-V Capital and Battery Ventures. CEO Matt Arbesfeld tells TechCrunch that the proceeds will be put toward R&D and expanding the size of the team from 130 people to roughly 180 by the end of the year.

Arbesfeld co-founded LogRocket in 2016 with Ben Edelstein, inspired by what Arbesfeld describes as a “seismic shift” in the industry’s approach to app development. As the market for web apps became more competitive, companies needed to differentiate based on experience — not just content. Suddenly, front-end engineers, designers and product managers were in high demand. But while there existed plenty of tools for monitoring app back ends, there were comparatively few for front-end components.

“With consumers accelerating their adoption of digital channels around the world, there is more data than ever before that can be used to optimize experiences — leading to an overwhelming amount of data in most analytics products. [Companies] don’t need more data, they need more actionable insights from their data,” Arbesfeld said in an email interview. “We founded LogRocket to help front-end engineers and product managers build better digital experiences by surfacing and identifying the root cause of the most impactful problems in their software products.”

At a high level, LogRocket enables developers to recreate user-reported issues to understand why they might’ve occurred. The platform supports session replay, alloying developers to see a user’s interactions on an app roughly how they experienced them. Beyond this, LogRocket — true to its name — stores logs of errors at the network and code level to spotlight less obvious technical and user interface bugs in apps.

LogRocket’s tools also let developers see how users journey through app flows and which behaviors might result in higher conversion rates (e.g., higher purchase volumes in an e-commerce app). Using a dashboard, customers can build custom funnels based on events like page views, clicks and checkouts and use heat maps and scroll maps to inform app design decisions. 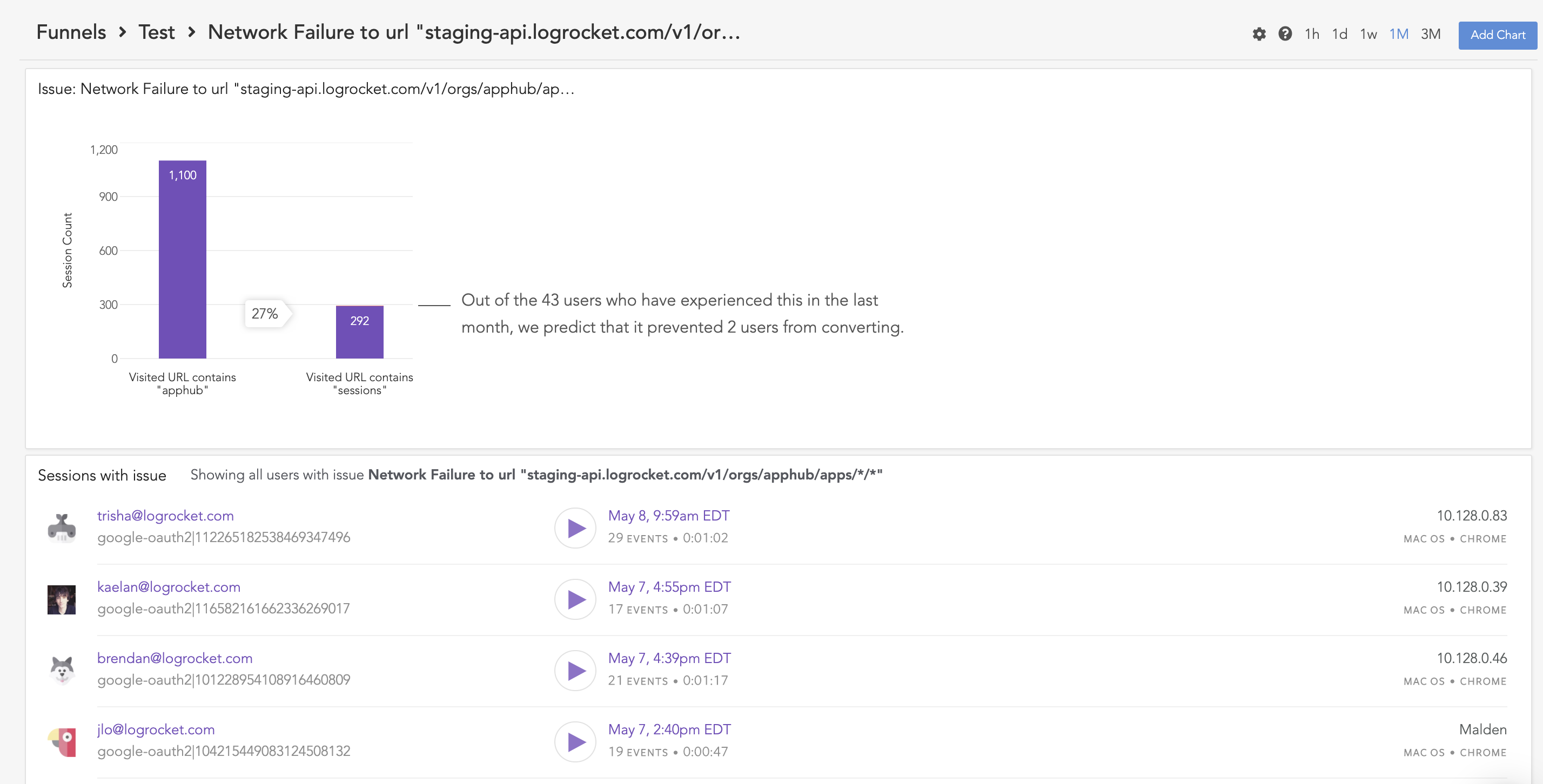 “Traditional digital analytics solutions require teams to pay for every user experience captured on their site, which quickly becomes cost-prohibitive for large businesses and business-to-business brands. Many teams turn to sampling data to control costs, which leads to problems when important data is missing,” Arbesfeld said. “We have a data set of hundreds of billions of online interactions that we’ve used to automatically identify impactful software issues to our customers. We use both customer feedback and an internal review team to optimize these models.”

Short of third-party testing, we’ll have to take LogRocket at its word where it concerns the accuracy of Conditional Recording. Even assuming it works exactly as advertised, LogRocket faces intense competition from rivals in the growing app analytics and monitoring sector. Arbesfeld sees FullStory, Quantum Metric and Contentsquare as direct competitors; all three are valued at over $1 billion. (Contentsquare nearly reached $3 billion last May.)

A 2021 report published by Global Industry Analysts, a market research firm, estimated that the global app analytics market would be worth $3.6 billion in 2026. The co-authors attributed the growth in part to the pandemic, which spurred many businesses to bolster their online presences. The Temkin Group found that companies that earn $1 billion annually can expect to earn an additional $775 million on average within three years of investing in improved digital customer experience.

Arbesfeld asserts that LogRocket’s ability to find user experience optimizations “in real time” sets it apart. He points to LogRocket’s user base as evidence that it’s winning over developers — LogRocket has 2,600 paying customers, including “large U.S. state governments and agencies,” that are using the platform to monitor 3.5 billion app sessions and 300 billion users interactions a year.

“Traditional tools require teams of analysts to dig through data to find insights. This is expensive, error-prone and can take weeks to surface actionable takeaways. Additionally, the output of this analysis will show ‘what’ happened, but not ‘why,'” Arbesfeld said. “By proactively surfacing opportunities to increase user conversion and engagement to product teams, companies can increase revenue by using LogRocket … [And] by providing Engineering teams with easy reproductions and context for user-reported issues, the platform can reduce the time spent on fixing customer issues.”

When contacted for comment, Battery’s Max Schireson, the former CEO of MongoDB, said:

As an ex-operator, I’m drawn to products that provide customers with platforms they love to use every day while still directly addressing customer’s specific — and often very technical — needs and requirements. LogRocket has built its solution with a focus on unparalleled user experience, without compromising on the depth of its technology.

To date, LogRocket has raised $55 million in venture capital.