More updates from not-for-profit climate action search engine Ecosia: It’s given itself its first major branding refresh since launch back in 2009 at the same time as announcing a shift from three-year to 20-year contracts for its tree planting projects — the idea being to ensure that the trees planted with profits from its search ads are “intergenerational” and can survive for the long haul.

Also today, the search engine said it’s grown global usage to 20 million monthly active users — up from 15 million between mid 2019 and 2021 — and is now serving half a billion searches each month. Usage of the search engine is highest in Germany, France, the U.K. and the U.S — and Ecosia tells us it’s looking to capitalize on the opportunities presented by a growing audience of climate aware, and often young, users.

Tree planting is a popular measure for combating CO2 emissions but the notion that humanity can simply plant its way out of the climate crisis has attracted a fair amount of skepticism. Poorly conceived tree planting projects have also been shown doing more harm than good as they can damage existing ecosystems and even reduce biodiversity. And, certainly, for reforestation projects to be credible rather than greenwashing there’s a lot more that needs to happen than just digging a few holes in the ground and sticking saplings in them. So Ecosia’s brand refresh looks like an attempt to not only brush up a rather dated look but also underscore that it’s very much not one of the tokenistic greenwashers.

Its search ad profits have funded the planting of some 150 million trees to date — and it touts high survival rates, noting its approach involves co-designing projects with local partners; use of local tree species (its portfolio consists of 900+ different species, which includes 30+ on the endangered species list); and the monitoring of trees for a minimum of three years using satellite technology, geotagging, photographic evidence and field visits to track survival.

The branding refresh flags this focus on tree biodiversity — with 12 tree icons modeled on native species displayed in the product to spotlight the location of its projects. 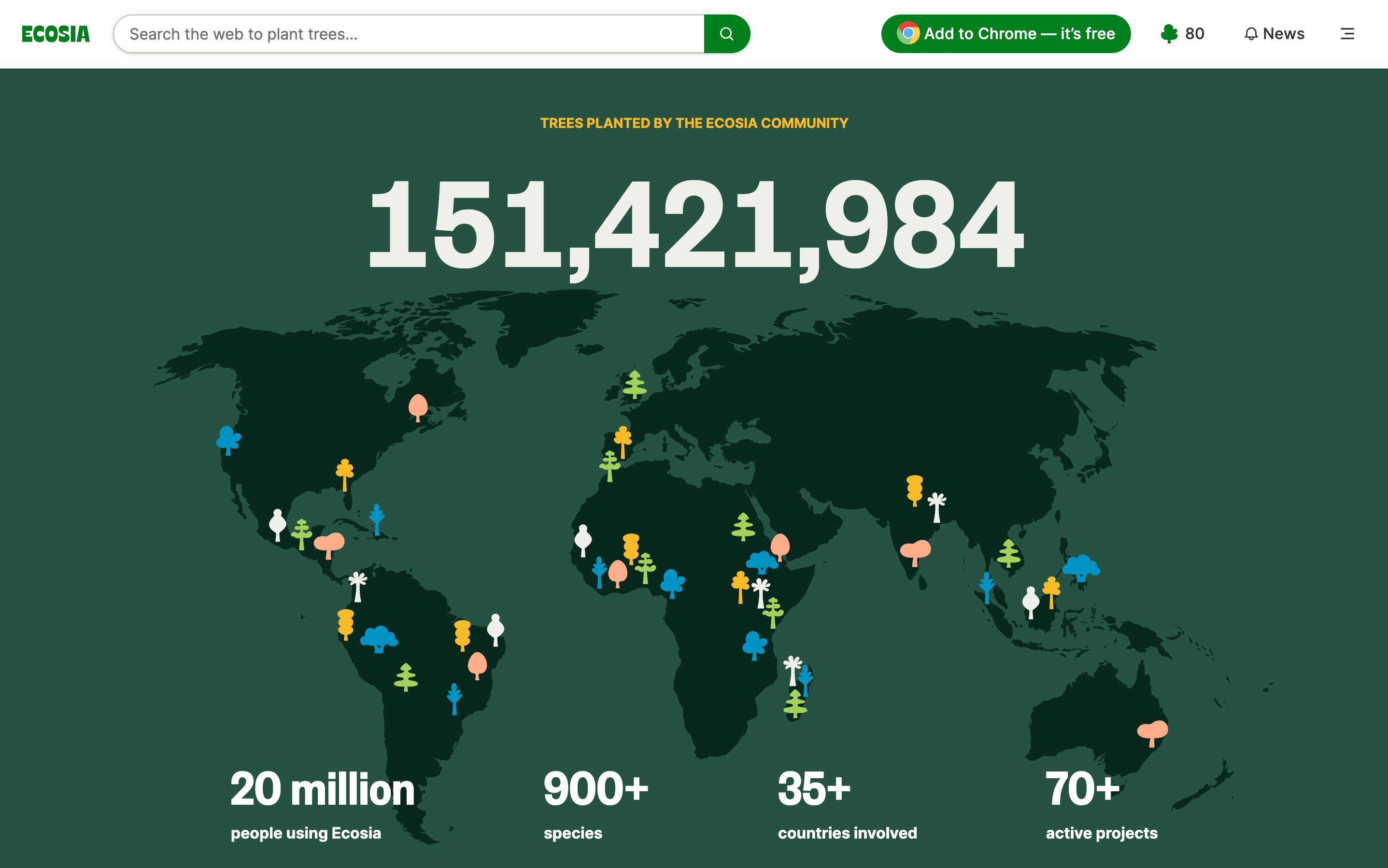 Ecosia also describes its projects as varied in scope, with a purpose that’s tailored to the local community and ecosystem — such as in India, where it works with an organization run by women in West Bengal, called Soceo, to plant fruit trees that provide a reliable source of income for them and their families. Point being that trees will only survive in a context where they are valued by the local community.

The search engine recently appointed its first chief product officer, Michael Metcalf, who suggests technology to support and enhance its partnering process is in the works. “There are more innovations there to come,” he told us, adding: “There are probably going to be technology stories there in the future as well in terms of how to better use technology and satellite imaging and things like that.”

When asked about the problems linked to tree plantations he agrees monocultures do more harm than good — but Ecosia emphasizes that the projects it supports are not creating plantations but are rather planting native tree species — “with an approach that focuses on right tree, right place, to restore biodiversity hotspots,” as it puts it.

“We’re doing this all over the world with lots of organizations that are aligned with our values, and one of our values is biodiversity,” Metcalf adds of its tree planting projects. “It’s also making sure that they are working with community members so that the community is bought into the experience. You can just go plant trees on a hill in Africa, for example; it won’t work. It’s not sustainable.”

Ecosia also isn’t planting trees for carbon offsetting — another measure that’s frequently framed as climate action but has been extensively criticized as greenwashing.

“We’re not selling trees to people who are trying to do offsets,” emphasizes Metcalf. “We’re investing in communities, we’re investing in trees as a way to make a permanent change. And that’s one of the reasons we’ve moved from a three-year commitment to a 20-year commitment — so it’s different when you’re in this for a financial gain … Because we have this really unique model where we basically are fueling this impact team to go out there and plant trees.”

Ecosia has more developments in the works as it scales usage. This summer it’ll be launching a Climate Pledge Rating that will see it apply a letter rating to 20 of the most searched companies (including the likes of Amazon, Meta and Spotify) that will involve displaying a verdict on these organizations’ commitment to climate action — and could result in certain tech giants having their feathers ruffled.

Metcalf didn’t have much detail on how the rating system will work but he said Ecosia is working with the Technische Universität Berlin to base the system off the open climate commitments of each company against the reports from the Intergovernmental Panel on Climate Change.

He said the general idea is to encourage others to take more action to reduce their impact on the climate.

An existing Ecosia feature — where the search engine displays a leaf icon alongside search results of “planet-friendly websites,” to help its users make more sustainable choices — has also been substantially expanded to include over 6,500 organizations, up from a few hundred per Metcalf.

That feature makes use of climate-rating audits published by institutions such as B Corp Climate Collective, Hilfswerft, Economy for the Common Good and Climate Accountability Institute, according to an Ecosia spokesperson.

Another incoming update Metcalf mentions is a (much requested) dark mode feature — slated for launch this fall.

“We’re going to keep doubling down on green search. And we’re going to keep just really making our user experience better,” he also told us. “I think the brand is the first step in that direction and the big preview here is we’re the same company we were before but we see a big opportunity to have a greater impact. And that’s what we want — we want to really unleash a lot of the energy that’s sitting there with our users. We have fantastic users. We know that they’ve got energy and so we really want to unleash that … We’re 100% aligned with our users in the fact that we want to do more to address climate change and the climate crisis.”

In a further step, Ecosia will shortly be launching a $250,000 fund to support Berlin-based businesses that raise awareness on environmental or climate issues or promote sustainable lifestyles.

It’s not its first foray into funding other businesses to take climate-friendly action: It recently announced it’s started ploughing a portion of its profits into supporting green energy in its home market of Germany — principally by investing millions of euros into Zolar‘s network of solar cell installers.

Last fall it also launched the €350 million WorldFund to back climate-focused startups — and has gone on to invest in startups including plant-based steak startup Juicy Marbles; tree-planting fintech TreeCard; and cocoa-free chocolate alternative Qoa.

“We want to do more to address climate change and the climate crisis,” added Metcalf. “We’re still going to plant trees; we’re still going to have great partnerships; we still have the WorldFund that’s investing in climate negative companies but I think for me, as a product officer, what’s exciting it we have a huge opportunity with tens of millions of users to do more.

“Search is a utility — people go there, they type something in a box, there’s some text, people click on ads every so often; hopefully we get the ads right and they go somewhere. But I think when we are able to sprinkle a little bit of green along that path, along the user’s journey and help make better decisions and educate them a bit, I think that’s the start of something much bigger and much more important.”