A new report from Endeavor Nigeria reveals that Africa’s digital economy and tech ecosystem is set to experience exponential growth periods. The report is dubbed “The Inflection Point: Africa’s Digital Economy is Poised to Take Off.”

It highlights important events in the continent’s tech ecosystem until this point, compares its journey with other emerging markets and provides guidance into the opportunities within various sectors. The report, which included analysis from McKinsey & Company, says its assertions are backed by an acceleration in strong market fundamentals and the impact of the pandemic.

The market size of Africa’s digital economy is massive and, if projections go as planned, should top $712 billion by 2050. The dynamics that play into this forecast, aside from the impact of COVID, include a youthful population (the youngest globally), rising smartphone adoption and internet penetration that has led to a burgeoning tech ecosystem backed by local and international VC dollars.

While many publications and reports have done an excellent job of describing the opportunities that abound on the continent, a few stakeholders like Endeavor believe a more precise picture needs to be painted.

New York-based Endeavor is a global community of “high-impact” founders across almost 40 underserved markets in Africa, Asia, Europe, Latin America and the Middle East. The firm also has a fund, Endeavor Catalyst, which has backed many unicorns outside the U.S. and China.

“From my conversation with many entrepreneurs, we kept hearing the same thing: While we talk about the African story and opportunity, not everyone has the African context,” Tosin Faniro-Dada, the managing director and CEO of Endeavor Nigeria, said to TechCrunch on a call.

“Entrepreneurs will say to me, ‘when we have to go beyond our local markets and walk into rooms to meet investors in San Francisco, New York and London, most of them don’t even know what we’re talking about; they don’t understand the African opportunity.’”

The organization’s report intends to shed more light on Africa’s market dynamics. For investors, it hopes to help them build local market intelligence. And though they are inclined to follow the money, Endeavor wants them to look beyond usual market opportunities and map out exit pathways.

Here are a few interesting points from the newly-launched report.

The continent’s $115 billion digital economy is in its early phases. For instance, 33% of individuals use the internet compared to a global average of 63%. The report also pinpoints other metrics such as fixed and mobile broadband connections and mobile cellular network coverage.

Much of the growth so far has been concentrated in four key markets: Nigeria, South Africa, Kenya and Egypt. These markets make up 32% of Africa’s population, 51% of the continent’s mobile network connections, 50% of its professional developers and 51% of its GDP. 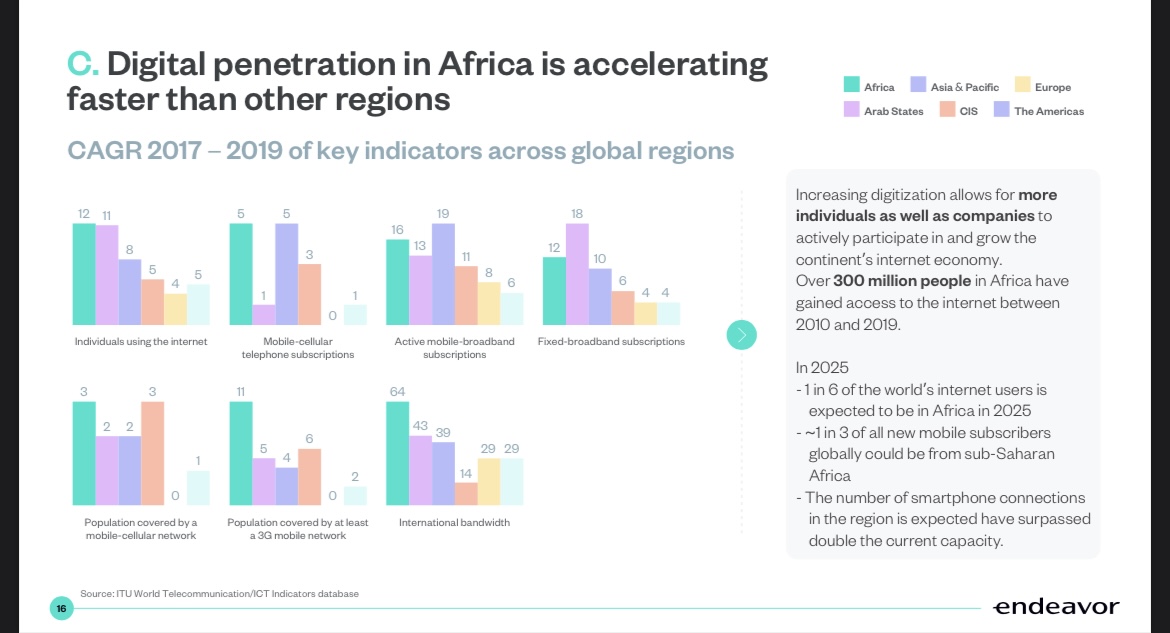 “By 2030, Africa is expected to have a total of $2.5 trillion in consumer expenditure from over 1.7 billion consumers,” the report said.

On talent, Endeavor’s report says two of the top five fastest-growing markets for GitHub contributions are in Africa: Nigeria and Egypt. According to the report, African developers created 40% more open source repositories on the software engineering marketplace in 2019 than in 2018 — recording a higher growth percentage than any other continent globally.

Other statistics include job projections from various channels: 44 million jobs if internet penetration reaches 75%, 3 million jobs from online marketplaces by 2025 and 1.7 million jobs due to Google’s $1 billion investment in the continent.

The report first highlights the growth of venture capital on the continent over the past six years; within this period, investments in African startups have grown 18x. From 2020 to 2021, it grew 2x faster than global startup funding, it said.

Endeavor also underscores the widely believed theory that Africa lags other emerging markets such as Latin America and Southeast Asia by five years. According to the firm, the continent’s funding trajectory from 2015 to 2020 is akin to Southeast Asia and Latin America’s 2010 to 2015 periods. “Going forward, Africa’s trajectory looks in line with SEA and faster than Latin America,” it said. 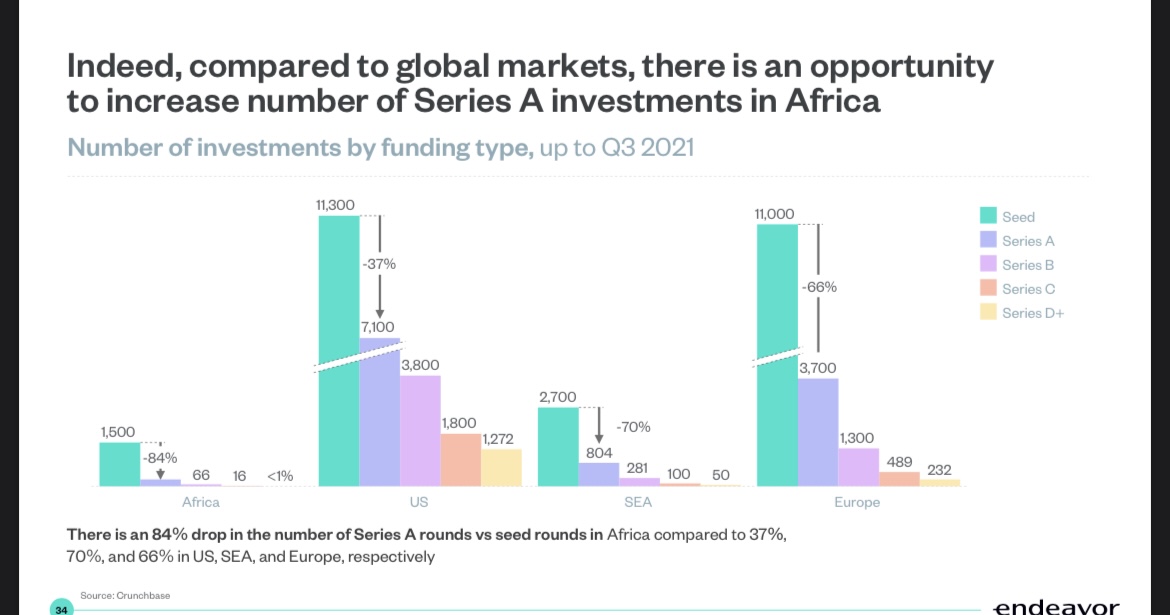 But as more global investors pay attention to Africa’s technology scene and local investors step up their game, what’s becoming evident is a shortage of capital in the early-growth stages, particularly around Series A investments. According to the report, there is an 84% drop in Series A rounds vs. seed rounds in Africa. This is compared to 37%, 70% and 66% in the U.S., Southeast Asia and Europe. There’s an opportunity here for local funds to invest above seed rounds, for larger Africa-focused firms to double down on Series A and for global funds to go lower than Series B, C and D.

The report also highlights how it’s taking less time for the continent to mint unicorns, the increase in mega rounds, liquidity events and exits (examples exist of local and international acquisitions, traditional IPOs and SPACs).

There are five main sectors in Africa’s startup landscape: financial services, commerce, transport, healthcare and education. Endeavor’s report describes why these sectors are vital to Africa’s growth, the various pain points startups try to address and how they go about it by providing a “wedge” — like an entrance to the market — and building around this wedge to offer more services that address other consumer and business needs. Some examples highlighted in the report include M-Pesa in fintech, Yoco in commerce, Kobo360 in transport, Helium Health in healthcare and uLesson in education. 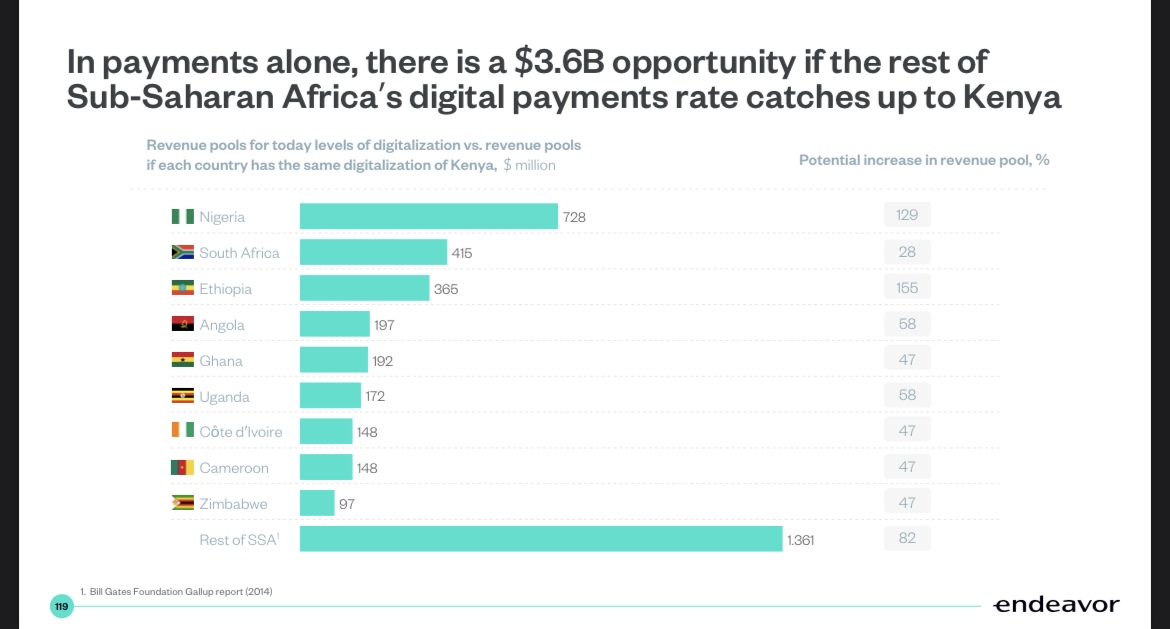 At the end of the report, Endeavor takes an individualistic perspective and deep dive into Africa’s largest markets, emphasizing what makes each country stand out. It calls Nigeria Africa’s largest internet economy and South Africa the continent’s most inclusive internet country. It describes Egypt as having one of the most diverse landscapes of digital businesses and lauds Kenya’s internet economy for contributing the most to Africa’s GDP.

“The data gathered in this report is clear — Africa is the next digital growth frontier,” said Faniro-Dada. “The combination of our young and digitally savvy population, an emerging technology ecosystem and the impact of the COVID-19 pandemic on behaviors is set to trigger an inflection point in our digitization journey. We have been excited by the increased levels of funding that our entrepreneurs are attracting, but we want to make it even easier for more investors to bring out their cheque books to catalyze the growth that we believe is pending.”