Branch, a startup offering bundled home and auto insurance, has raised $147 million in Series C funding at a postmoney valuation of $1.05 billion.

Branch, according to co-founder and CEO Steve Lekas, is the only insurance company that he is aware of that can bind insurance through an API, and the only one that can bundle auto and home insurance in a single transaction.

Another way Branch is unique, he adds, is that it can be embedded into the buying experience. In other words, the company has partnered with mortgage or security system providers to integrate insurance at the point of sale in their products. For example, if a person is closing on a home, they have the option of purchasing Branch insurance at the same time. Partners include Homepoint, OpenRoad Lending and SimpliSafe, among others.

This distribution model means that Branch shells out less to acquire customers and thus, it claims, is able to offer premiums for a lower price than competitors. But the startup also offers its insurance direct-to-consumer and through agencies.

The company has seen impressive growth. While Lekas declined to reveal hard revenue figures, he did say that Branch has grown its annualized written premium by 1,300% in the last 12 months. Since announcing its $50 million raise almost exactly 1 year ago, the startup has also increased its head count from around 75 employees to just over 400 today.

The company plans to use its new capital in part to accelerate its rollout across the U.S. It is currently in 28 states, having expanded into nine new ones this year.

“The thing that Branch does differently is charge an appropriate amount to cover the costs of running each policy,” Lekas told TechCrunch. “We have a price and a model that no one else can replicate at this stage. And so we’re trying to double down on it and get to scale quickly in all 51 states…The funny thing is, even though we’re four years younger than the insurtechs that preceded us, I think we’ll be the first one to get to cash flow positive by a stretch.”

Lekas began his career at Allstate, where he went on to hold roles in underwriting, technology and product management. He then went on to build Esurance’s first online home insurance business.

But in the back of his mind, Lekas yearned to figure out a way to make insurance more accessible for more people. And so he teamed up with Joe Emison, and Branch was born. Since it went to market in 2019, Branch claims to have saved its “members” an average of $548 a year. 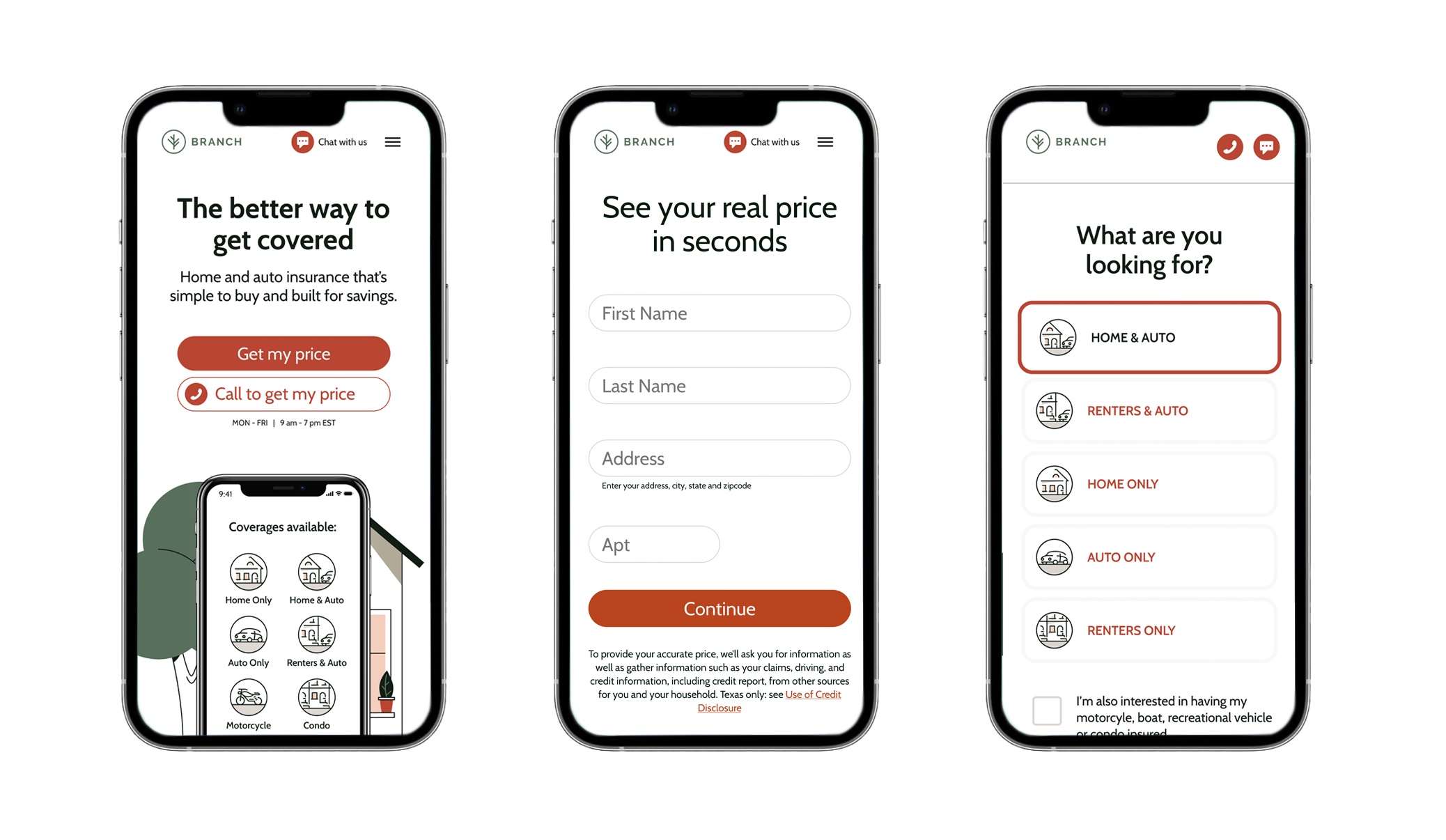 Branch is not the first insurtech that Weatherford has backed. It has also backed The Zebra, an Austin-based company that operates an insurance comparison site that achieved unicorn status last year.

For Branch to have raised a nine-digit round in a challenging macroeconomic environment and amid a global venture slowdown is no easy feat. Add to that the fact that a number of insurtechs that went public last year — such as Root, Lemonade, Hippo and Metromile — are struggling with stocks at all-time lows and others such as Policygenius are laying off, and Branch’s achievements feel even more impressive.

Early on, though, it was difficult to get investors’ attention, Lekas admits.

“We came from a place where we were not the first insurtech, so we battled early since venture doesn’t like to compete with venture, so once venture thinks there’s a well-funded, intelligent, credible group of people tackling a problem, then they think twice about putting more money behind a competitor,” he told TechCrunch. “But now we’re at at a scale where we’re selling more product than most of those that came before us. I think the thing we’ve made is the thing that everyone thought they were investing in to begin with.”

Ian Sigalow, co-founder and managing partner at early and repeat Branch investor Greycroft, said his firm has backed the insurtech in every round it has raised “since the beginning.”

“What attracted us at the outset hasn’t changed — Branch is one of the first companies to offer embedded home and auto insurance, and delivers massive savings for its members,” Sigalow told TechCrunch. “Steve Lekas also stood out from many other insurance founders because of his prior experience — he had already scaled the homeowner’s business at Esurance and run product, data science, strategy, and marketing at Verisk, which is the one of the largest data providers to the insurance industry. As a result of his experience, he was able to execute on the market opportunity very quickly.”

He believes that Branch’s biggest differentiator is that its tech stack allows it to instantly underwrite and bind policies with just a name and address, ultimately resulting in lower-cost policies.

“As a business, especially at a time when insurtechs are struggling in the public market, we believe Branch’s technology stands apart and will allow them to grow quickly while also producing sustainable long-term loss ratios,” Sigalow added.

In addition to working to become profitable, Branch has more altruistic goals. The startup is a public benefits corporation and manages a reciprocal exchange, an organization in which the policyholders are the actual owners of the policy premiums. The structure is built to align incentives and provide members with as much savings as possible. It also has formed a nonprofit, SafetyNest, to help those who are un- or underinsured.