Sanlo, a San Francisco-based fintech startup that offers small to medium-sized game and app companies access to tools to manage their finances and capital to fuel their growth, has raised $10 million in Series A funding led by Konvoy.

The startup was founded in 2020 by CEO Olya Caliujnaia and CTO William Liu, who both have backgrounds in fintech and gaming. Sanlo offers businesses access to technology, tools and insights that aim to help them achieve scalable growth. When Sanlo determines that the business could benefit from the deployment of capital, the startup assists by offering financing. Sanlo notes that it’s not a VC fund that takes equity in exchange for funding or a lender that charges compounding interest. The amount of financing provided varies, but it’s non-dilutive capital, which means that Sanlo takes no ownership stake in the companies it finances.

Caliujnaia told TechCrunch in an interview that one of the ways Sanlo differs from other fintech companies is its focus on gaming and app developers. She noted that although there are other companies focusing on other verticals in e-commerce or SAAS, Sanlo is focused on gaming and consumer apps.

“We’re a technology company, not a fund,” Caliujnaia said. “That allows us to move quickly and be transparent about how we work and how we arrive at the products that we build and offer to customers. We’re also building a full stack of products, it’s not just about growth capital. Developers have other options via publishers, VCs and banks, but those usually involve complex and lengthy processes.”

To get started, Sanlo asks companies for certain types of data, including product data about how well the app or game monetizes. Sanlo also gets information about customer acquisition and retention, as well as marketing data and a subset of financial data. Its predictive algorithms then continually monitor the company’s growth trajectory to surface insights to identify where and how the business can grow. Sanlo then provides companies with access to capital. 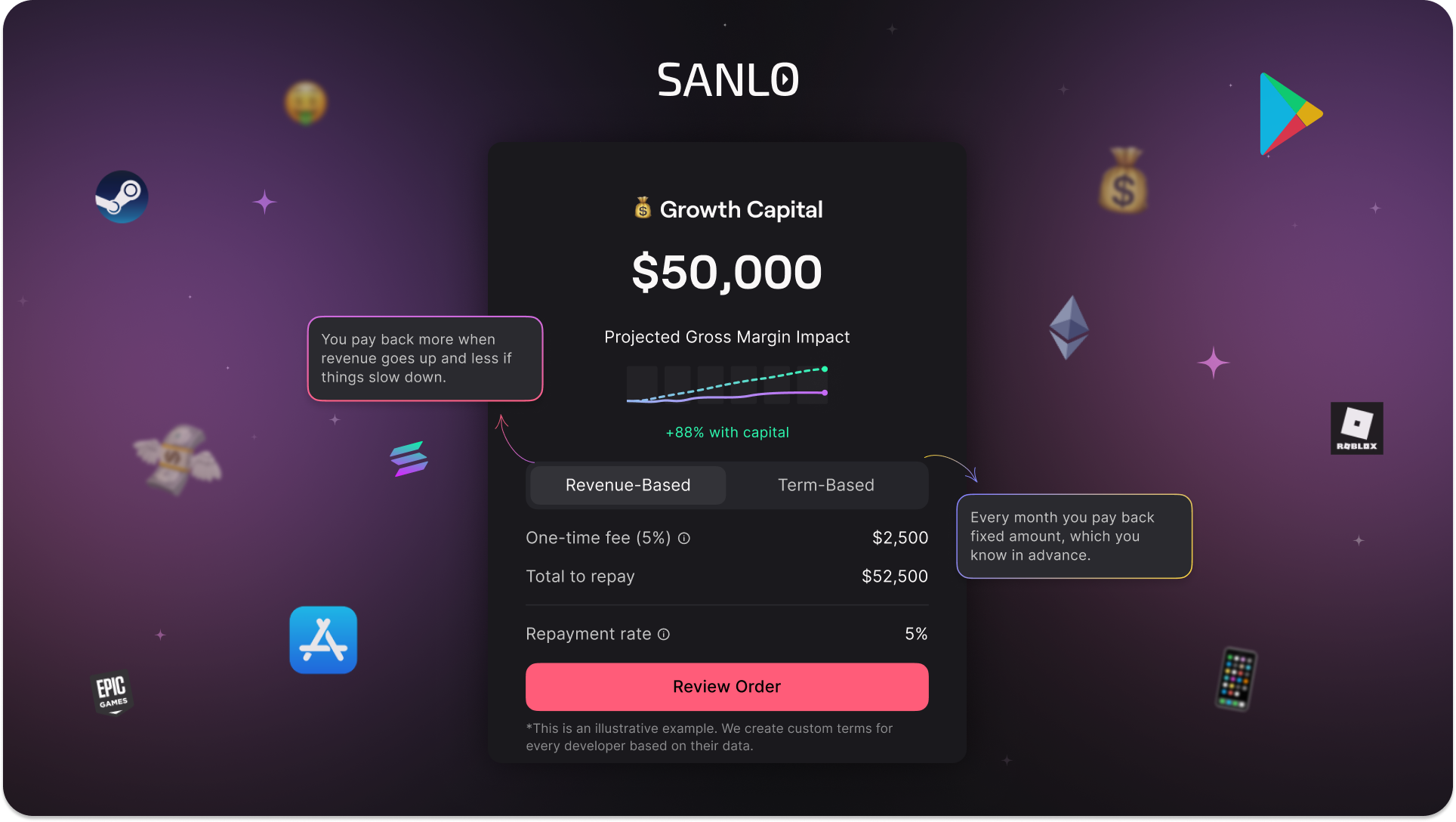 As for the new funding, Caliujnaia said Sanlo will use the money to create more products for developers and to bring on more people to grow its 15-person team.

“The plan is to build out more products and to build out the team,” Caliujnaia said. “We’re looking for passionate people to help us build better and faster. We’re working with people primarily in North America at this point, but we’re open to talented people in other places around the world.”

The funding round included participation from existing investors, including Initial Capital, Portage Ventures, XYZ Venture Capital, London Venture Partners and Index Ventures. The funding round also included participation from new investors, including Fin Capital, GFR Fund and a number of angel investors. Sanlo’s Series A funding comes a year after it announced $3.5 million in seed funding co-led by Index Ventures and Initial Capital.

As part of the funding announcement, Sanlo also revealed that it has partnered with HCG Funds to expand its pool of capital to $200 million to provide funding to the developers it works with.

Sanlo has spent the past 12 months onboarding select developers and is currently working with dozens of companies. Caliujnaia said the company carefully selects businesses to work with and regularly checks in with them to allow for close collaboration. In one instance, Sanlo says it helped a large game publisher that was looking to consolidate and gain visibility into cash flows from multiple platforms. The company has also helped a subscription consumer app developer that wanted additional financial bandwidth to bring economy designers on board to tighten monetization. In another case, Sanlo helped another game developer that was looking for predictable non-dilutive capital to finance the development of their expanding portfolio of games.