Despite economic turmoil in the tech world, an Oakland-based startup shows that moonshots are still getting funded. Felt, co-founded by Sam Hashemi and Can Duruk, wants to disrupt the role of maps in society, and rethink how we think about the medium. The startup allows users to build a map with datasets integrated into it, and work with each other to showcase impact in a less static way than your average Google maps query.

Despite a massive mission — proving that maps are a forgotten yet fundamental medium worth renovating — the co-founders cited proven business models from Figma and Notion, both valued in the billions, as reason to believe in their work. The aforementioned companies both succeeded in rolling out to users for personal use, then pivoting to the enterprise, a playbook that Felt wants to follow (and that VCs can certainly speak the language of).

“That kind of business model and go to market is — I don’t want to say immune, but is a little bit removed from the kind of market fluctuations we’re seeing,” Hashemi said. “It’s really not about consumer spending, it’s not about an advertising business, it’s just day in day out work that businesses are relying on.”

The argument worked. Today, the collaborative software startup tells TechCrunch that it recently closed a $15 million Series A led by Footwork, with participation from Bain Capital Ventures, Moxxie Ventures and Designer Fund.

Since its seed round, a $4.5 million investment announced in August 2021, Felt has grown its team from seven people to 15 people across Hawaii, California, Missouri, Vermont, Canada and Spain. One of Felt’s team members — Mamata Akella — is even an in-house cartographer — a job title you don’t too often see as part of the early-stage startup ranks.

The funding, and team growth, means that Felt thinks it is ready for the next phase of growth: feedback. The startup launched its platform publicly today after weeks of private beta testing with over 1,000 people. The public beta combined 50 layers of data, such as earthquake history or wildfire data, with a clean interface meant to empower people to draw their own maps. That in and of itself is a feat, the co-founders say, given that data is often fragmented, inaccurate or just straight-up badly formatted. 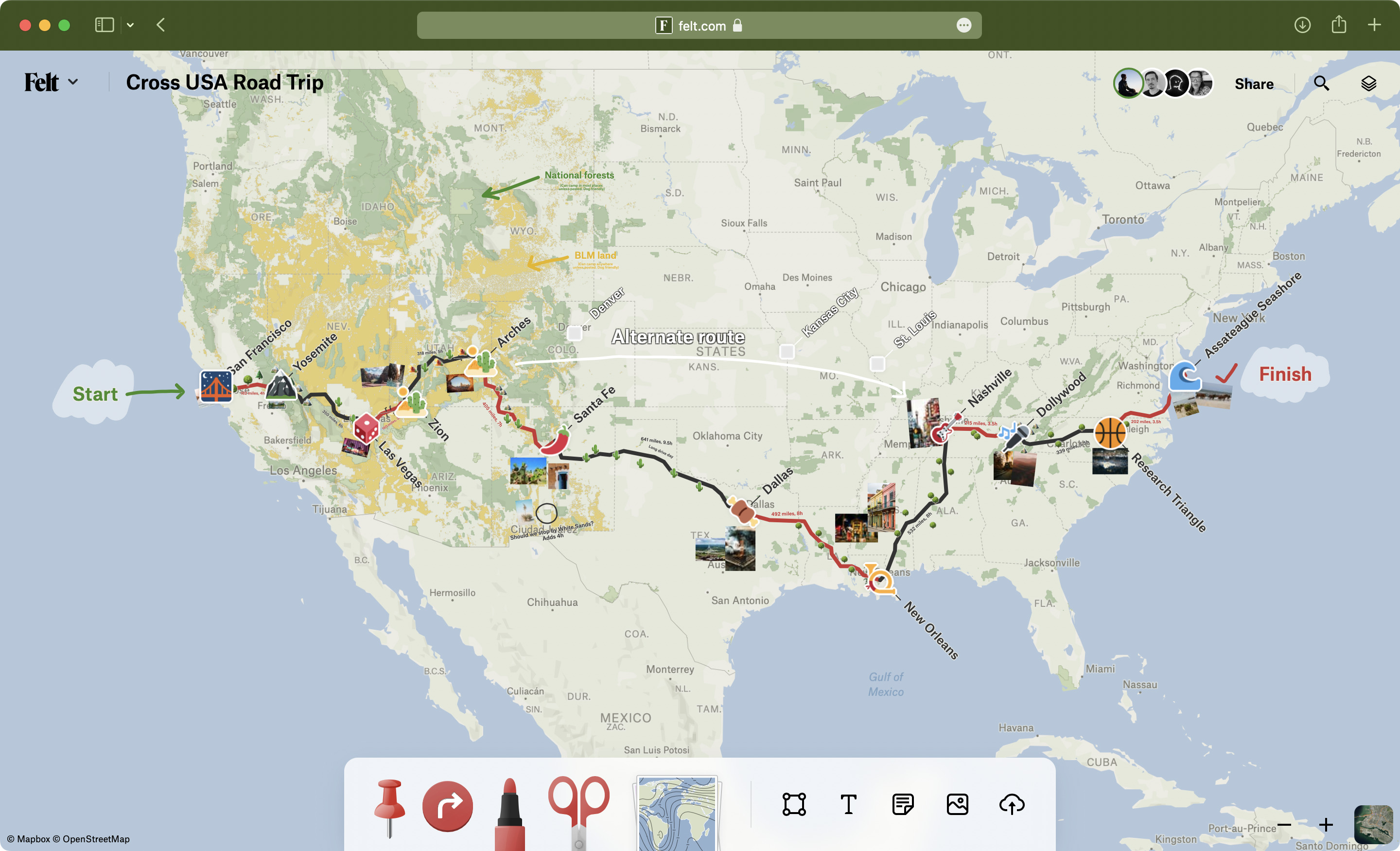 Felt is meant to be a continuation of the collaborative software movement underscored by everyday tools like Google Docs and top companies like Notion and Figma, as well as a sequel to Hashemi’s previous company, Remix. Bought by Via for $100 million, Remix is a city transportation planning startup born out of Code for America Hackathon. Felt was the follow-up story, this time taking mapping beyond cities. From August to now, the co-founders say that Felt went from a tech demo to a product with more “commercial legs,” including richer, fact-checked datasets, fewer bugs and, hopefully, a faster load time.

Felt launched with a climate-focused angle, yet that focus feels broader today. Hashemi said that the company is also investing in ways to serve other use cases, such as the sciences need to understand ocean landscape, or the national park’s wanting a better way to track trails. 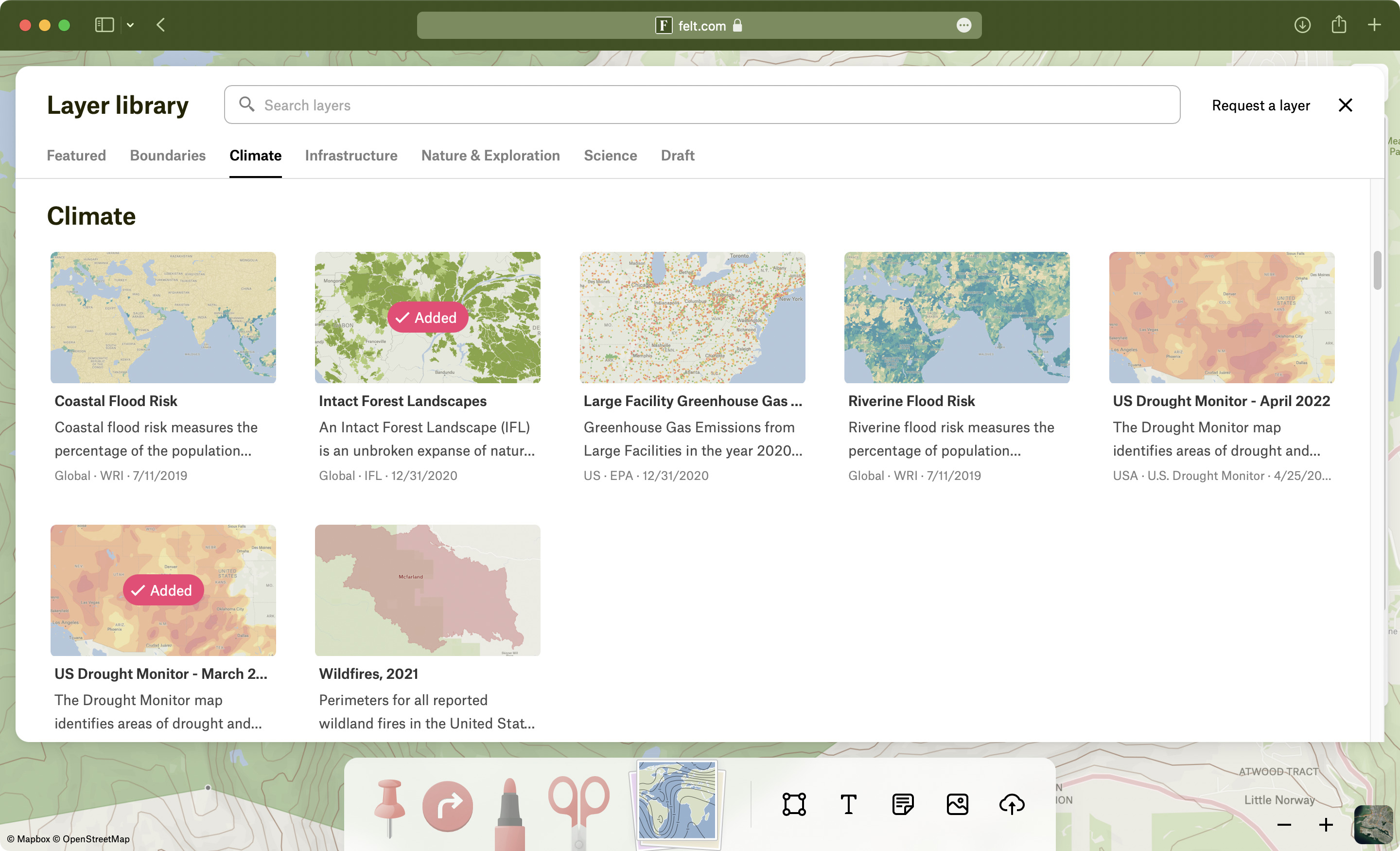 Duruk said they no longer view climate as a single industry, but instead as more of a horizontal idea. “Now, every single industry that has a physical presence on Earth has to have climate and weather and fires and floods in mind…it impacts everything.” One example that Hashemi offered up was how maps can help people fleeing the war in Ukraine. How do people offer up houses, get matched or see what’s available?

A lot of these collaboration use cases, he explained, “require a larger audience using the product and pushing the boundaries.”

The next chapter should help Felt with prioritizing which features to launch next or identifying surprising use cases, but it should also give it the pressure to answer some of its most looming challenges, such as how to moderate maps or build processes that limit bad actors. These are massive questions to answer before maps can become the next big medium. The startup is launching with a moderation-first approach in the beginning, banning any kind of criminal and illegal activity such as “the next insurrection map.” Duruk thinks that the public launch will show what gaps they have in their understanding.

“You need to moderate,” said Duruk, who previously worked at Uber and data security company VGS. “I do not believe in opening something up to the world just filled with hopes and dreams, a small number of bad actors can make the experience awful for everyone and turn the platform into a bad place.”

The startup has some well-powered competition. Other than Google Maps and Apple maps, social maps app Zenly, a company owned by Snap, recently announced that it is creating its own mapping data and engine. After three years of work, Zenly wants to integrate social data and mapping data into one frame; focusing less on being “pixel perfect” and more on rolling out a different type of map.

For Felt, this is both competition and an affirmation. While Zenly is going for consumers, Felt wants to be enterprise ready. The success of both efforts depends on the world’s appetite for a new way to map their thoughts. Even if it requires more than going from point A to point B.