Slack your colleague to say hello? Perhaps you’ll be rated as being off-task. Babbling too much in a meeting? You’ll get a low rating in efficiency. Tired after a night awake with your sleepless toddler? That’s a low enthusiasm rating. At any moment of the work day, you can rate and be rated, watching as your scores fluctuate up and down.

Per a report from The Information, Coinbase has been using Dot Collector since the first quarter of the year, emulating a less intense version of the practices at Bridgewater.

Dalio is notorious for promoting a culture of “radical transparency” at Bridgewater. The fund has been known to videotape almost everything that happens at the office for reference, and employees walk around with iPads to grade each other on their adherence to Dalio’s Principles, a collection of over 200 rules for business and life.

With the Dot Collector program and Zoom plug-in, any company (like Coinbase) can invite their employees to judge each other’s performance in real time, even while working remotely.

“It’s hard to have an objective, open-minded, emotion-free conversation about performance if there is no data to discuss. It’s also hard to track progress,” Dalio wrote in a tweet about the product. “This is part of the reason I created the Dot Collector.”

But this data-driven, “emotion-free” approach to management ignores the humanity of the people behind products. 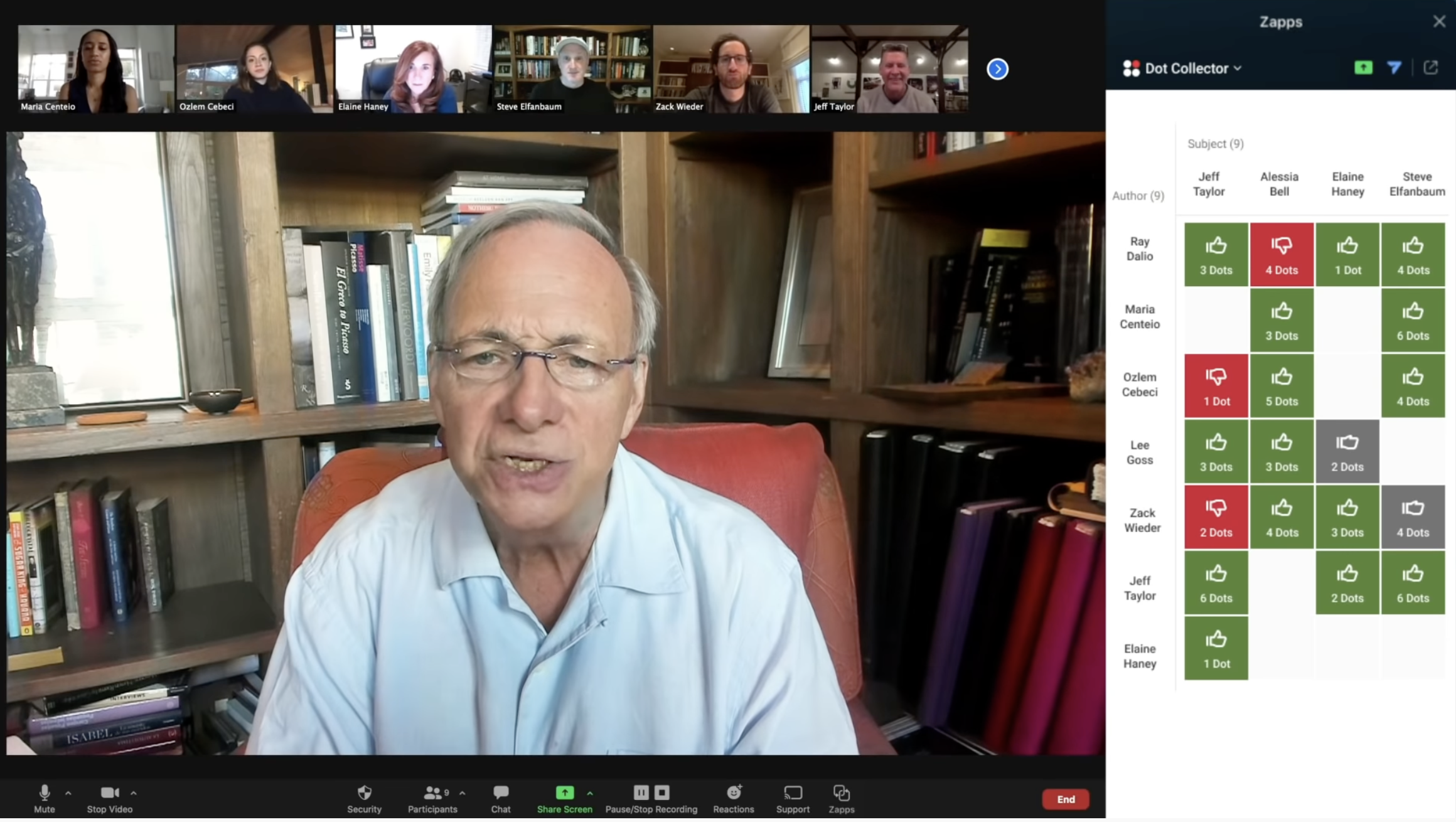 Using Dalio’s Dot Collector app, Coinbase employees rate their colleagues based on how well they adhere to Coinbase’s cultural tenets, which include “positive energy,” “efficient execution” and “clear communication.”

An assistant management professor at the Wharton School, Samir Nurmohamed, told TechCrunch that there hasn’t been much research conducted on these kinds of feedback systems — but if a system works in one workplace, that doesn’t guarantee it will translate effectively in others. Plus, different workplaces and industries have different standards for churn. At Bridgewater, 30% of employees leave within 18 months of their start date. While Dalio might be okay with that, other managers might find that concerning.

Bridgewater aims to “champion diversity,” but Nurmohamed says that in the workplace, people are more likely to think favorably about people who share similar views, which may impact the way they rate their colleagues.

“So, if people from marginalized backgrounds are making comments that are not in line with my own values or ideology, I might suddenly penalize them when it comes to these rating systems,” he explains. “The question becomes then, how are these ratings being looked at? If there’s systemic bias across the board, how will they evaluate that data?”

Proponents of Dot Collector argue that the system levels the playing field, since it allows lower-level employees to provide honest feedback to managers. But that transparency comes at the cost of constant surveillance.

“From a managerial standpoint, it might be helpful, right? We know that sometimes, those with more power are more likely to dominate the conversation in meetings, rather than listen,” Nurmohamed says. “But those with less power are already getting worried about what kind of impression they’re giving off. It could induce a sense of fear in the organization.”

These systems may also cause a feeling of “feedback fatigue,” where workers become desensitized to criticism and are less likely to benefit from such constant feedback.

“Sometimes people just have a bad day — something went wrong at home last night, or maybe it’s a virtual meeting and their technology wasn’t good,” Nurmohamed adds. “It could be very exhausting for people at work to constantly get this feedback.” 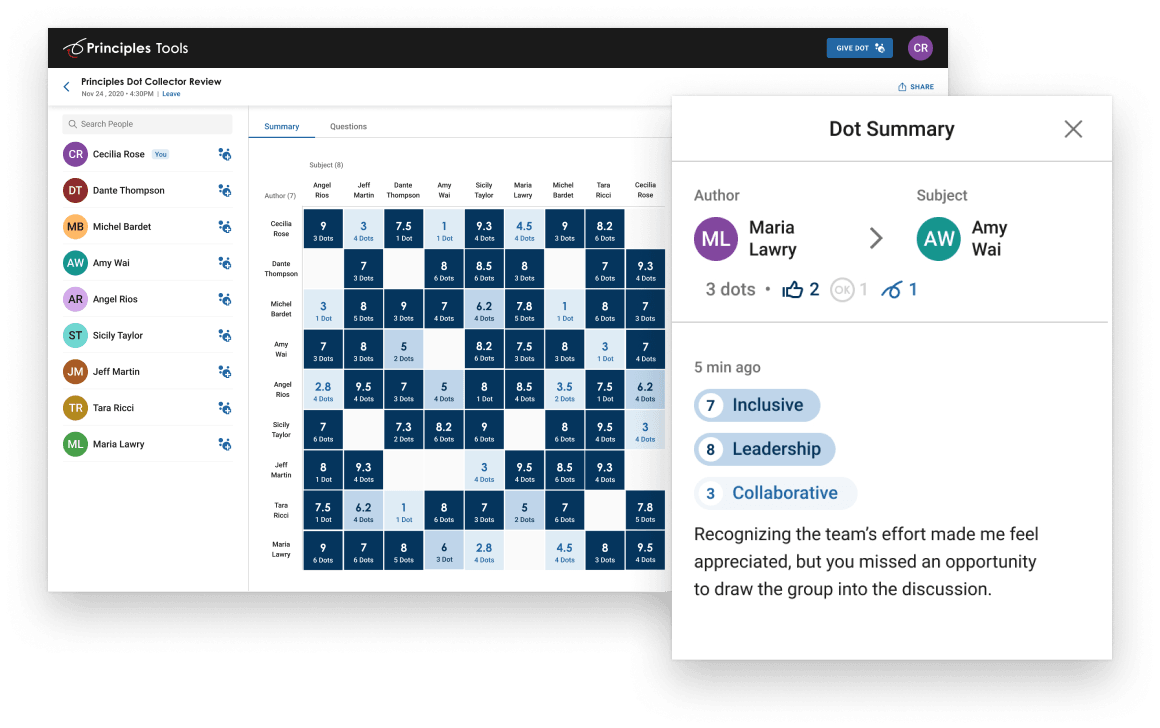 “A cauldron of fear”

Dalio credits Bridgewater’s unique and divisive corporate culture as its secret to success — his hedge fund is the largest in the world. Coinbase is similarly known for its company culture, which controversially bars employees from political activism.

In June 2020, a group of Coinbase employees staged a walk out in response to CEO Brian Armstrong’s refusal to support Black Lives Matter. Then, weeks before the 2020 U.S. Presidential election, he instituted this apolitical policy and offered severance packages for those who didn’t want to stay.

Over at Bridgewater, Dalio’s “radical transparency” isn’t always effective in practice either. In one high-profile case, an employee filed a complaint against the company, calling it “a cauldron of fear and intimidation.” That doesn’t seem too surprising a description of a workplace where workers are given iPads for the explicit purpose of judging each other.

According to a 2016 report in the New York Times, this employee alleged that he experienced sexual harassment from his supervisor but kept this a secret out of fear that he wouldn’t be promoted. He suddenly withdrew the complaint jointly with Bridgewater, but then the National Labor Relations Board filed a separate complaint, arguing that Bridgewater was preventing employees from speaking about negative treatment due to the rigorous NDAs they sign upon employment. Bridgewater reached a resolution with the National Labor Relations Board over the complaint, but like most of what goes on at the hedge fund, the final agreement is secret.

Dalio has denied these claims, noting that “If Bridgewater was really as bad as the New York Times describes, then why would anyone want to work here?” (Money, probably.)

“It can sound mean, crazy or like a cult to people who don’t know what it’s really like,” Dalio said to Business Insider in 2016. “Some people describe it as being like an intellectual Navy SEAL. Others describe it as being like spending time with the Dalai Lama to obtain self-discovery. To me, it’s a wonderful community of people who bust their asses to be excellent.”

It’s still up in the air whether Coinbase will continue using Dot Collector. For now, companies using the tool must decide whether they hope to emulate Bridgewater — a profitable, yet intense company — or hone a culture where employee happiness is a priority.

What the ‘nonpolitical’ startup leader teaches us about company culture

Citizen Ray: Bridgewater’s Ray Dalio is the wise uncle you wished you had