Over the last decade, the rate at which organizations create data has accelerated as it becomes cheaper to store, access and process data. But as data continues to grow in scale and complexity, it’s becoming scattered across apps and platforms — often leading to problems where it concerns data quality. According to a 2020 O’Reilly survey, more than 60% of companies believe they have too many data sources and inconsistent data, while over a third said that they have too few resources available to address the data quality issues.

Tomas Kratky argues that the solution lies in software. He’s the founder of Manta, a data lineage platform that automatically scans an organization’s data sources to build a map of data flows.

“Data-driven decisions can only be as good as the quality of the underlying data sets and analysis. Insights gleaned from error-filled spreadsheets or business intelligence apps could lead to poor decisions that may be costly and damage the business,” Kratky told TechCrunch in an email interview. “To enable large data modernization and transformation projects, data lineage is a key component to solving the complexity of vast data infrastructure layers and tracking the flow of data within an organization.”

Laying the groundwork for growth, Manta today announced that it raised $35 million in Series B funding led by Forestay Capital, with participation from Bessemer Venture Partners, SAP.io, Senovo VC, Credo Ventures, Dan Fougere and European Bank for Reconstruction and Development. The company said the proceeds will be put toward expanding its 152-person workforce to 220 by the end of the year.

Manta was founded in 2016 by Kratky, who previously led R&D at Profinit, a data science consultancy based in Czechia. The goal, he said, was to tackle the complexity of enterprise data environments with maps of data dependencies designed to help users avoid “major data incidents.”

Kratky believes that he’s more or less achieved this with the current iteration of the Manta platform. Leveraging AI, Manta traces sources of data — including databases, reporting and analysis software and modeling tools — to the ends of the pipelines that deliver it to apps and services. A “time slicing” feature allows users to see how data looked in the past and understand how the lineage has changed, while an impact analysis tool shows how planned changes will influence parts of the data environment. 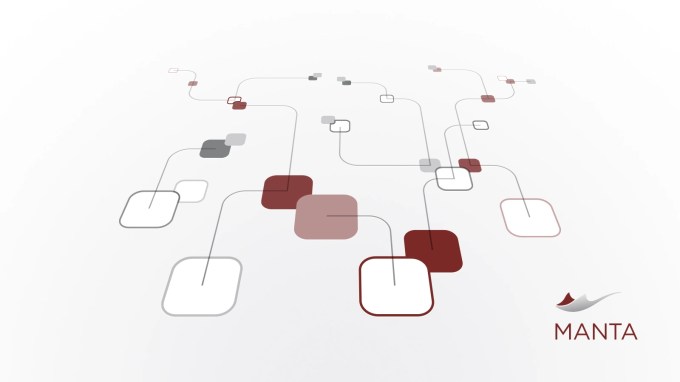 “We combine many different technological approaches so our customers can easily eliminate blind spots and have complete visibility and control of the most complex aspects of their data environments,” Kratky said. “Importantly, since Manta only maps customers’ data-processing environment, we do not come in contact with the data itself — only the systems that are working with it.”

Manta also monitors for discrepancies and breakages in data flows, combining different technological approaches in an effort to minimize blind spots. The platform’s analyses can be viewed within native dashboards or sent to third-party software, including governance software, via connectors and Manta’s API.

“Data is the lifeblood of every organization and is the most critical asset for enterprises today, [but] most organizations struggle with … a high number of material incidents, significant risk exposure, slow change management, and a significant amount of data engineering resources continuously wasted on routine, manual tasks,” Kratky said. “Data lineage and observability are key capabilities that can solve these complex issues. When implemented properly, they can help to restore visibility, which brings back trust in the data, improves efficiency and speed of implementation of changes and business requirements, and prevents incidents from happening.”

While it’s true that IT teams are struggling to keep up with their organization’s data, they also face hurdles with the software aimed at helping manage it. According to a recent Sigma survey, 1 in 4 business experts said that data analyses at their organizations take too long, leading to teams giving up on finding answers to anomalies. But a 2021 Era Software poll found that a failure of data observability tools to scale often leads to delays in troubleshooting and incident resolution.

Kratky points to Manta’s customer base as evidence of the platform’s robustness: 100 customers, including “very large enterprises from the Fortune 100 and Fortune 500.” He sees Manta competing with Collibra and Informatica in the market for data lineage and observability tools. Other potential rivals include Monte Carlo and Databand, both of which have raised tens of millions in venture capital.

Statista predicts that the combined cybersecurity and observability market will be worth $28.26 billion by 2024.

“Data lineage and observability are becoming the core component of any modern data architecture. Almost every player in the data management space is at least evaluating the market, with most of them trying to enter it — whether it be vendors in data cataloging, data quality, etc.,” Kratky said. “When enterprises have complete visibility into their data stack, the return on investment will be critical to operations and business decision making … In other words, by understanding the role automated data lineage can play in [their] data quality strategy, enterprises can reap the benefits of improving data quality.”

Manta has offices in New York and Prague, as well as Lisbon and Dublin, and a new headquarters in Tampa Bay. With the Series B, the startup’s total raised stands at $53 million.