South African edtech startup FoondaMate has secured $2 million seed funding in a round led by LocalGlobe, the U.K.-based venture capital firm, to drive uptake of its WhatsApp and Facebook-based learning chatbot across the globe.

FoondaMate helps students with their revision by giving them immediate answers to questions and access to revision papers, while also guiding them in responses to questions.

Co-founder Dacod Magagula told TechCrunch that the startup targets high-school students in emerging markets where WhatsApp is widely used and is a lot cheaper or free to access. Its learning chatbot, he said, is easy to use, affordable and acts as an organized alternative to using search engines for study. Educators also use FoondaMate’s integrated resources to set and post homework and to share other learning materials with students.

Magagula said he started working on FoondaMate in August 2020, when WhatsApp opened its API in beta — to help businesses connect to customers.

“It (WhatsApp) was in beta at the time, and I started playing around with it … I thought it’d be a really good way to enable access to study materials to students in the same position as myself…because a majority of students do not have access to the wider internet but have access to WhatsApp. Also, a lot of network providers offer WhatsApp for free to attract users to their network,” said Magagula, who co-founded FoondaMate with Tao Boyle — who, before they teamed up, was trying to fix the supply chain to get textbooks to underserved schools.

Besides, Magagula had additional experience from his high-school days that made him see the feasibility of the idea.

“…during the final year of high school in South Africa, I used the computer my brother and I had bought using our savings, for studies and to download all revision materials I could get my hands on. I had a huge database of past papers but no way of sharing it with my friends, and printing them was expensive,” said Magagula, who serves as the startup’s CEO and CTO.

“… But the materials played a big role in my success in school as I graduated top of my class and my performance was the best ever in the history of school (at that time). And so FoondaMate was created to make these resources easily accessible to students,” said Magagula, who pursued Computer Science at the University of CapeTown. After teaming up with Boyle, they added more functionalities and integrated it with additional services. 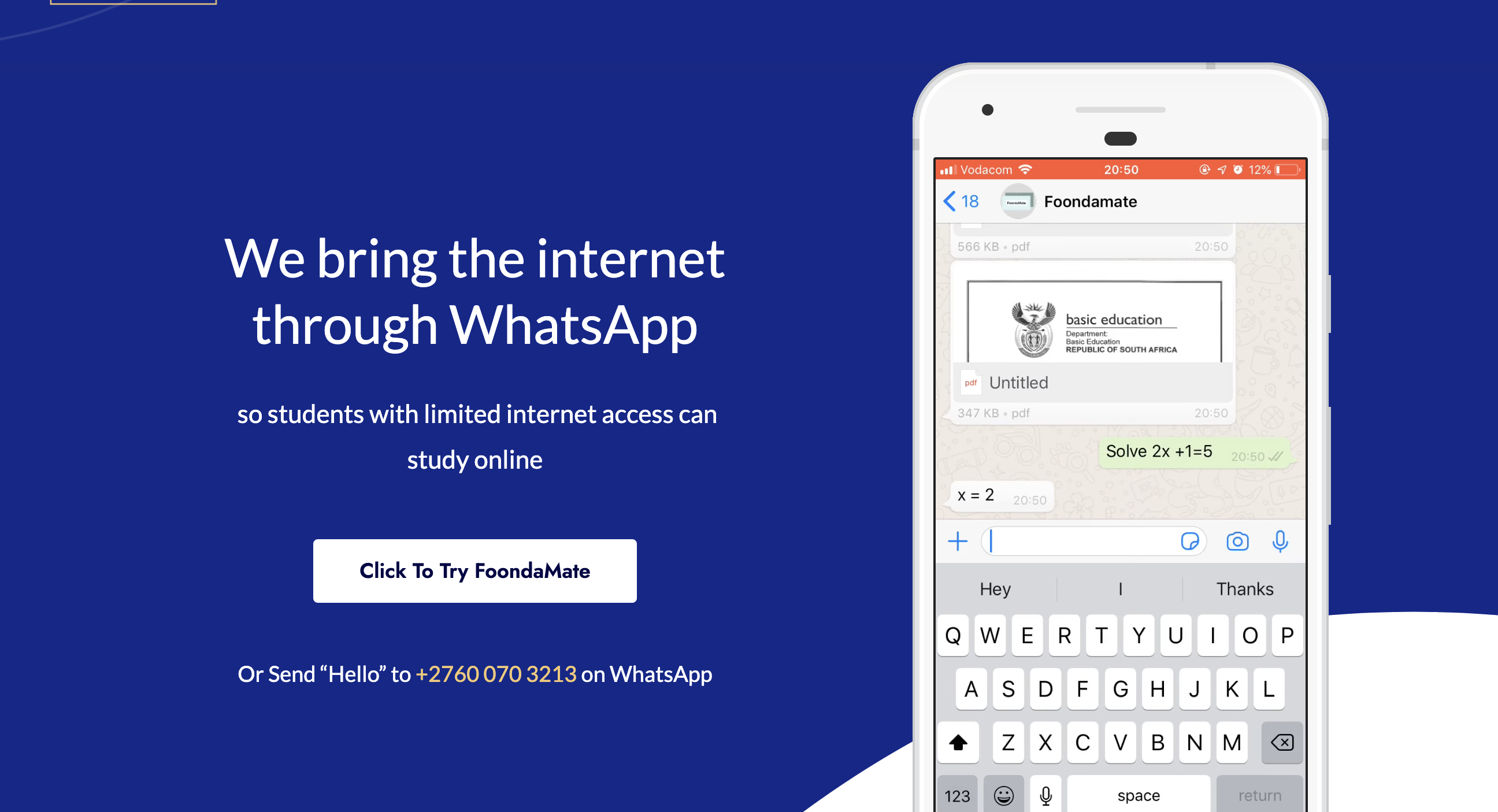 Since launch FoondaMate has been used the world over by more than 400,000 students using over 10 languages in over 30 countries, including Colombia, Mexico, Brazil and Indonesia — where the startup recently launched and has seen a surge in usage.

Magagula said the startup is currently working on localizing its learning material to accommodate learners in more countries and fuel the growth of its platform to more than 50 million users. Its recent funding round brings around the resources needed for this rapid take-off.

“Initially I thought FoondaMate would be used by students who do not have access to Wi-Fi and those with limited access to the internet. But reality is, it is being used by those with good internet connectivity too…because it’s really an easy and intuitive way to access study material,” he said.

The startup has a team that vets where the bot sources the information, and also monitors results, to keep the children safe on the platform.

In addition to LocalGlobe, the round had the participation of Emerge Education, Odunayo Eweniyi via FirstCheckAfrica, Iyin Aboyeji via Future Africa, and LoftyInc, alongside angels from Luno (Marcus Swanepoel) and Justworks (Isaac Oates). They join XX accelerator, the startup’s first backer.

“Having initially launched with a mission to transform how students across Africa study, FoondaMate has evolved into a tool that is now used and loved by learners from a range of backgrounds, with varying needs and learning styles, from all across the world. We believe that it takes immense empathy for a problem and a real long-term view to build a product of this kind,” said Reichert.