Sony and Microsoft have been rivals in gaming for decades, but one positive aspect that has come out of that recently is a renewed focus on accessibility that has seen both companies pushing the boundaries of how games can be played and by whom. It looks like God of War: Ragnarök may be the most accessible title yet, and that’s saying something.

I don’t mean to say that Microsoft is lagging — its hardware options for gamers with physical disabilities are remarkable. But Sony’s in-house and exclusive developers have set a new standard for accessibility options that make their games the most flexible in the business.

Ragnarök is no exception. Its predecessor, the 2018 reboot of this venerable franchise, was a blockbuster hit and fairly accessible in its own right, but since then new options have appeared in titles like Ratchet & Clank and The Last of Us: Part Two that really change the game.

Some of these are features that will be helpful to people with certain specific disabilities, like a visual or hearing impairment. But others are just ways to make the game fit your specific playstyle better.

For instance, there are now tons of options for customizing the subtitles and audio descriptions — both what gets subtitled and how it looks. Pick your text size, background, etc. to be readable from across the room, and change the colors so that speakers, dialogue and captions for actions and descriptions appear differently. 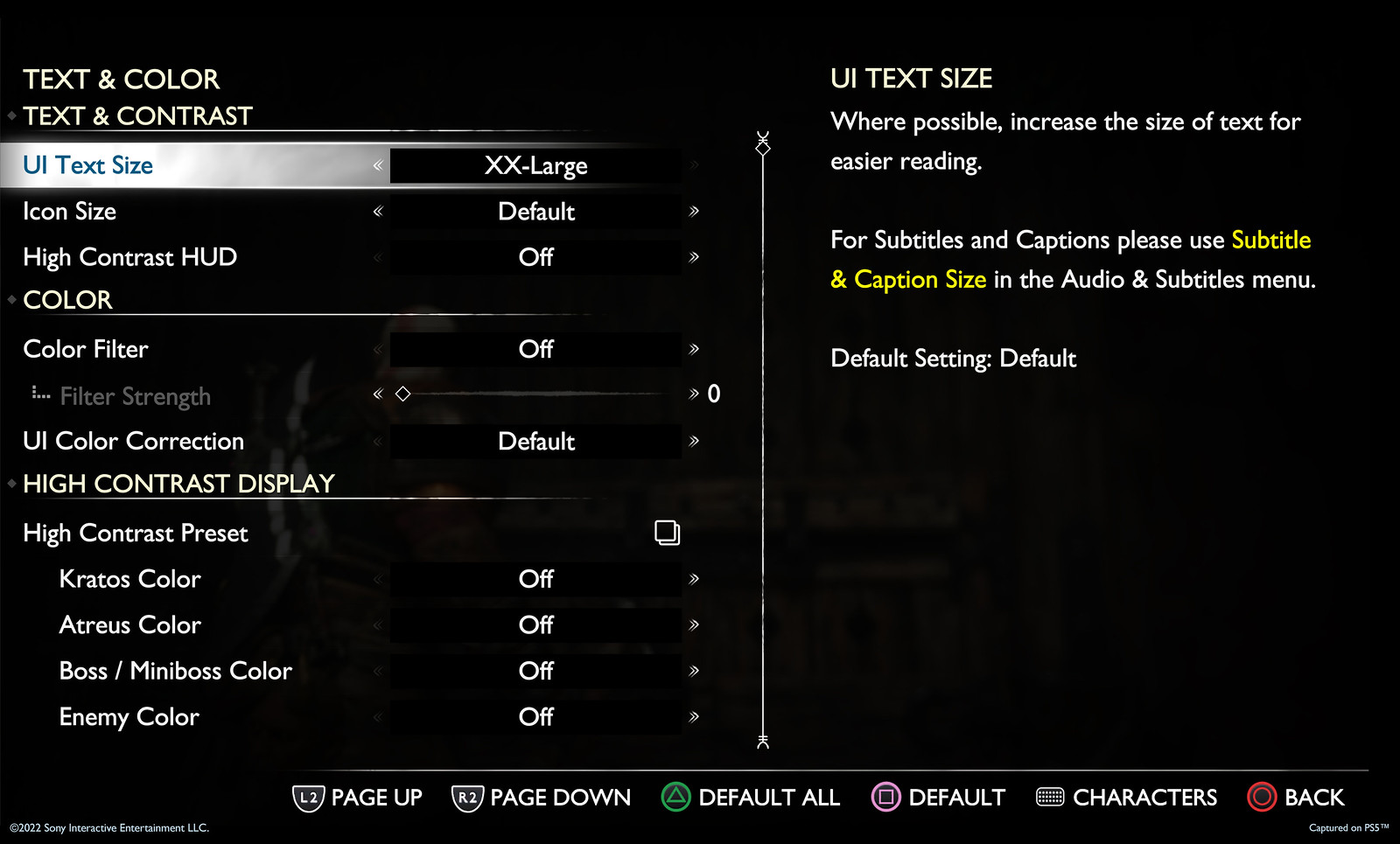 There are also more captions to choose from:

We’ve added captions to both cinematics and gameplay to provide a rich understanding of the soundscape of the world. You can also enable captions for critical gameplay information to assist with puzzles and narrative understanding.

You can see a version of the game’s trailer with audio description here, if you’re curious:

This is very helpful for situations where (as in the first game) you pull a lever and hear a door grind open behind you. But if you can’t hear that, there’s no indication the lever did anything at all! So having a caption like “Door grinds open” appear is helpful whether you’re hard of hearing or just playing with the volume down so you don’t wake the kids. And a directional indicator tells you which way the sound came from — all able to be independently toggled, because maybe you have great hearing but only in one ear, so dialogue is fine but stereo cues don’t work.

Here it is in action:

You can also change the size of the UI, menu and even the little icons that come up when you can interact with something. Plus interactive prompts now make unique sounds so if you can’t tell which icon is which quickly, you have extra data to work with.

One feature I fully intend to take advantage of is “Navigation Assist,” which lets you hit a button to have the camera point in the general direction of the next objective. I’ve got a pretty good spatial sense but after playing with Ghost of Tsushima’s genius wind mechanic (stroke the touchpad and the wind blows toward your objective) I feel more comfortable using these helpful, subtle reminders.

Then there are options for people with low vision, for instance replacing detailed textures with color maps — you’re one color, allies are another, enemies a third and so on. This is something I encountered in a way in Genshin Impact, where chests all glow with a very specific shade of orange — nothing else is that color, and for good reason. A bit of that in God of War, where the treasure is frequently easy to miss, could be really helpful for those who (unlike me) don’t want to scour every corner up close for goodies.

Of course it takes a lot of work to provide these options, and the God of War series is top tier even among AAA titles and developers, so no one is saying it’s easy. But hopefully features like this will continue to trickle down to smaller games so they’re as easy to access as the big ones.