The world of web development continues to become increasingly more democratized — and more creative — thanks to innovations in “headless” systems that give more flexibility around how a site can look and function: an API-based middle ground between using rigid templates and building and maintaining every single component of a web’s tech stack from the ground up. Today, one of the startups building headless tools specifically for content management is announcing a big round of funding on the back of some important customer wins.

Storyblok — a startup founded in Linz, Austria, that has built a headless CMS designed both for technical and non-technical users like marketers to manage content that appears across websites, apps and other digital interfaces for education, commerce, gaming and other kinds of publishers — has raised $47 million, funding that it will use to continue expanding its CMS platform with more functionality. The company’s tools are already used by some others 74,000 companies, including Netflix, Adidas, T-Mobile, Happy Socks and Deliveroo, which collectively have built some 120,000 projects on top of it, including the content across websites that need regular updates, side-quests in games, advertising features in apps and more.

The Series B is being led by Mubadala Capital and HV Capital, with 3VC and firstminute Capital also participating. The funding follows a Series A of $8.5 million in February 2021 also led by Mubadala. Storyblok has raised $58 million to date, and it’s not disclosing its valuation.

There are a number of headless CMS providers in the world today — companies like Contentful, Prismic, Contentstack, Strapi and many more — that compete with Storyblok, but CEO and co-founder Dominik Angerer believes his company represents a new wave of innovation in web development.

Years ago, companies like WordPress, Squarespace and Wix broke new ground in how users could select from a dynamic range of templates when building websites. More recently, a newer set of startups, tapping into innovations around APIs to plug in complex technical processes, created a new and more flexible approach to building sites (“headless” the term was coined by the founder of Commercetools, which as its name implies applied the idea initially to the building of e-commerce sites). But these still represented a pain point for the wider organization: headless in this sense may have done away with needing to build the very technical and complex back-end components of managing payments and databases, but not the technicalities of building or populating the front end of sites.

This is where Storyblok comes into the story. Its system represents a new generation of headless development, whereby its platform can also be used by non-technical people like marketers, by way of modules that are pre-built and operate as “blocks” that can be updated but also manipulated by them. Angerer and his co-founder Alexander Feiglstorfer came up with the idea in 2017 when they saw that the systems in use at the time still required developers to build and maintain content, which ultimately still put a lot of operational strains on organizations. Modules was their solution to that: the blocks would initially be programmed by developers but could subsequently be updated, and manipulated otherwise by anyone. (Those developers making the initial blocks could be either at the company in question, or could come from a third-party agency. Storyblok itself offers a network of 1,000 third parties in a marketplace.)

The end result looks like this, a range of templates where marketers provide updates to developers but also work independently on content: 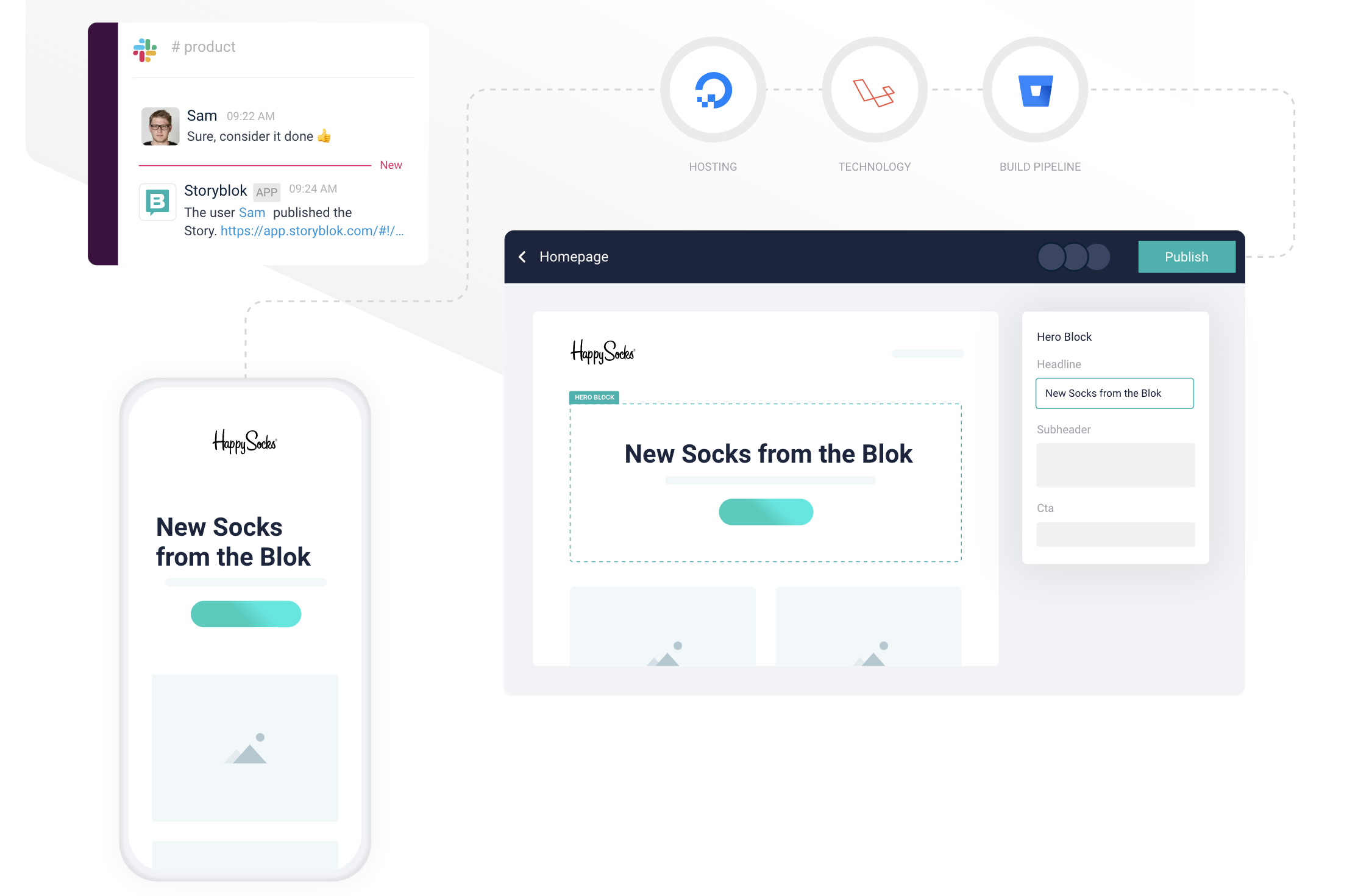 Storyblok has seen a lot of traction in part because of how it addresses that significant gap that exists in a lot of organizations: those who need to touch the content of sites most frequently are typically not the technical teams but those managing content. And as digital content proliferates into a wider array of formats and screens — games and apps, smartphones and watches, that demands even more input from the less technical teams, and more strain put on developer teams.

That, in turn, gives designers and developers more time to focus on the components that they are best trained to develop.

“We’ve been big believers in Storyblok from day one, and the speed at which the company has managed to scale since our Series A investment has been remarkable. Storyblok’s strong organic traction is a real testament to the quality of the product Dominik and Alex have built, and we are excited to continue our partnership with the Storyblok team,” said Fatou Bintou Sagnang, Partner at Mubadala Capital Ventures, in a statement.

The company does not see itself as part of the wave of low-code and no-code tools: developers still need to be involved to build the initial blocks that marketers can then update.

Angerer sees developing the headless structure and focusing on those blocks as part of “its core functionality,” he said. “So switching over to building no-code tools would feel like a betrayal to that mission.” However, third parties have plugged into the Storyblok system to create those tools for others to use if they want. (One example, he said, is Instant Commerce, which has built an integration on top of Storyblok that combines design components from Storyblok’s content managing functionality with e-commerce functionality from Shopify.)