The gig economy has, to use a well-worn word, disrupted industries from ride-hailing to quick-service restaurants. Contract work has its downsides, namely on the pay and benefits side of the equation. But sheer force of will and unit economics beneficial to corporations have catapulted it into the mainstream.

A 2019 study by Mastercard estimated that the global gig economy now generates $204 billion in gross volume. It expects that volume to grow 17% by 2023.

A number of entrepreneurs push back against the notion that the gig economy is a net negative, pointing to the flexibility it provides to both workers and employers. Raphael Ouzan and Kobi Matsri are among this cohort, having founded A.Team, a gig marketplace for product engineers, in early 2020.

“We saw that highly-skilled tech workers wanted to escape the rigid structures of full-time work, but the [traditional] gig economy wasn’t an answer for them, since it was so commoditizing and capped with simple, task-based work,” Ouzan told TechCrunch in an email interview. “Then came the obvious insight: Solving problems that matter requires a team of diverse skill sets, background, and perspectives. Team is the core unit of work of the knowledge economy, and yet had never been productized in the world of online work.” 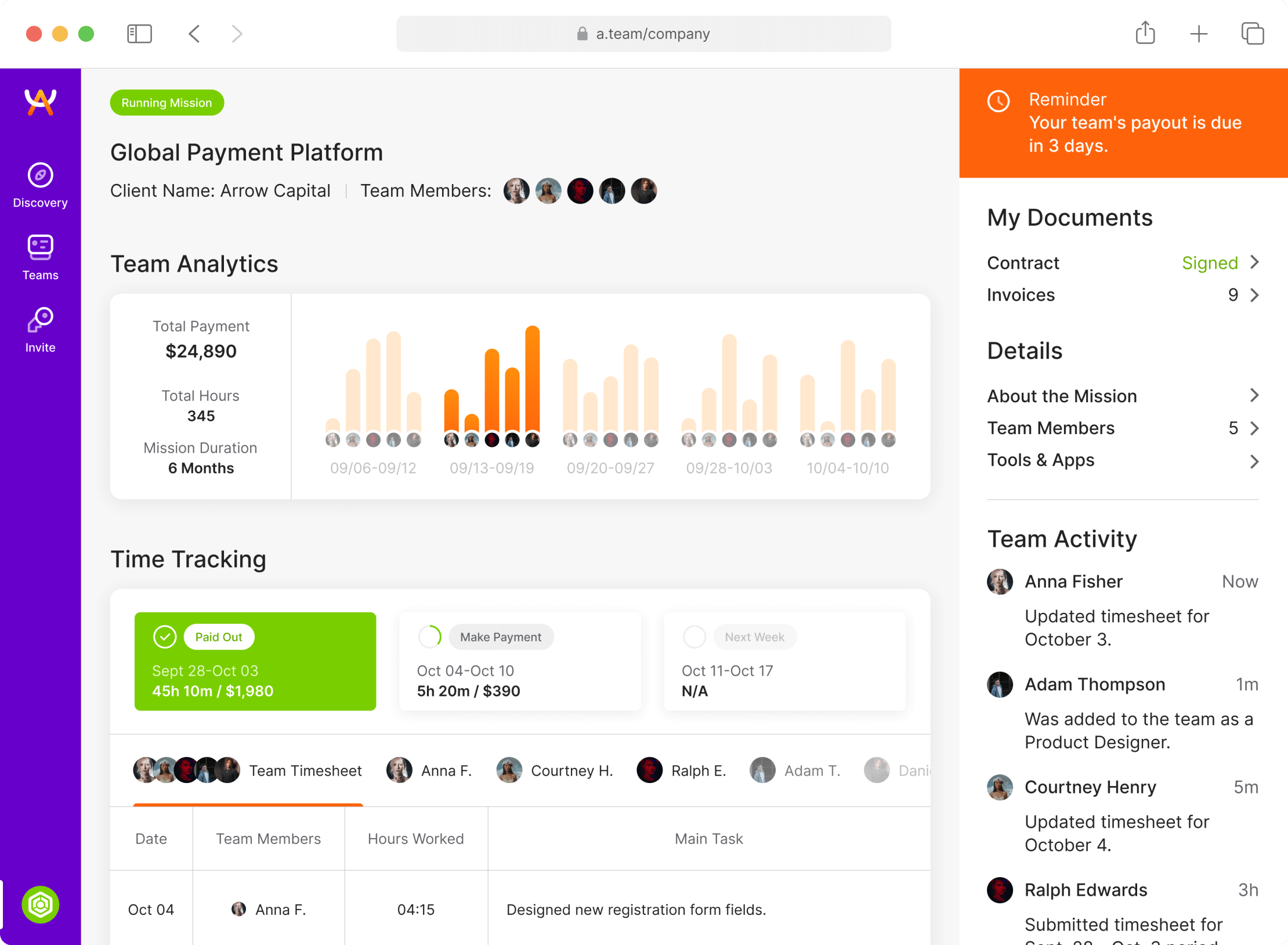 Ouzan claims that A.Team, which today emerged from stealth with $60 million in funding, differs from traditional gig platforms in that it “bring[s] world-class product builders together as cloud-based teams and connect[s] them with companies that had meaningful product missions.” That’s a lot of jargon and positive framing, but the crux is that A.Team helps companies assemble teams of vetted specialists to design and/or bring products to market.

A.Team launched at the start of the pandemic, when crippling layoffs were hitting the tech industry. Ouzan says that thousands of engineers, designers and product managers signed up to build products, including mask distribution, contact tracing and vaccine manufacturing software.

The normalization of remote work fueled growth, too, as product specialists were increasingly able to work from home. “We’d never publicly launched A.Team as a company, but grew to a [referral- and] members-only network of over 250 clients and 4,000 builders while still in stealth and invite-only over the past two years — all through word-of-mouth,” Ouzan said. “We started enabling product builders to team up with their peers to work on problems that matter to them while enjoying full autonomy and income.”

Fascinatingly, A.Team leveraged its own network in combination with a full-time staff to build and expand the A.Team platform. A.Team’s contractors and full-timers created what Ouzan called the TeamGraph, which takes into account a gig candidate’s work experience and “behavioral analytics” to piece together product teams for companies. The TeamGraph is a semantic graph that attempts to establish the relationships between industry experience, skills, roles and expertise, pulling data from a range of sources and using machine learning to optimize the graph with inputs from A.Team’s Team Pulse feature. Team Pulse enables customers to rate the A.Team members they’re working with and members to rate each other — honestly and not maliciously, one would hope.

“Our algorithm can … learn what [A. Team users are] interested in based on behavioral data, not just self-reported data. Think of it like a smart inbox for teams and missions,” Ouzan said. “With TeamGraph, we don’t recommend people for roles — we recommend teams for missions. We mitigate bias in our recommendations by ensuring the algorithm is blind to any demographic or location data.”

Like any other jobs platform, A.Team also provides recommendations to gig searchers and teams, leaning on connections, complementary skill sets, and projects to identify top matches.

“A.Team is popularizing the concept of elastic resourcing by way of cloud-based teams, which will make companies and builders more resilient to potential market downswings. It’s a smarter way to scale for growth,” Ouzan argues. “The power dynamics have changed, and the best and a lot of the top tech talent in the world want the freedom and flexibility to work on what matters to them, not the rigid structures of a full-time job.” 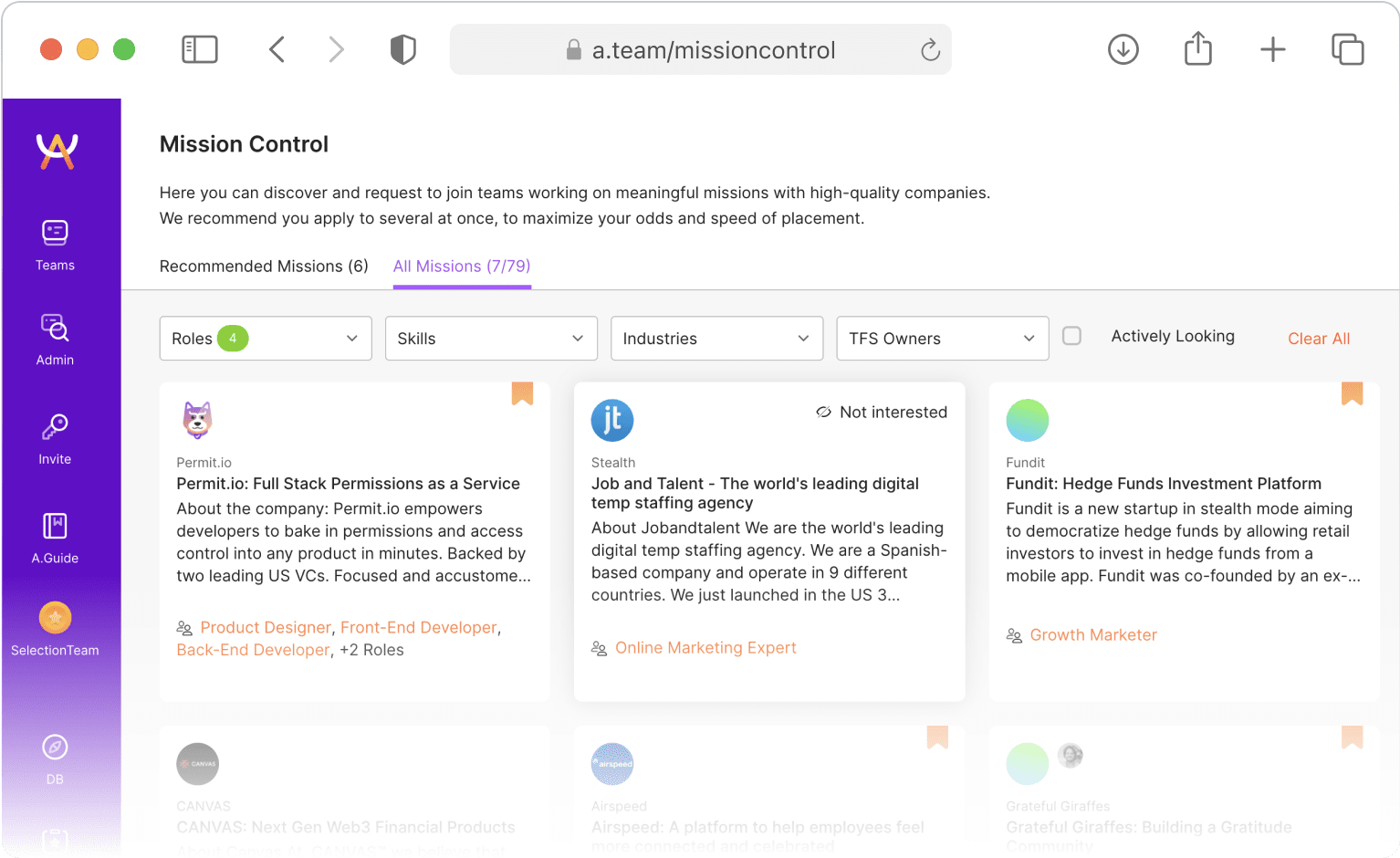 The evidence is mixed on this. While it’s true that many professionals quit full-time jobs for contract work during the pandemic, particularly in project management and consulting, surveys show that the benefits and perks that come along with salaried work remain highly desirable. As for whether a greater reliance on contract workers can insulate companies against economic headwinds, that’s proven to be untrue in certain industries, like health care, which during the pandemic paid contractors significantly more than full-time workers to address staffing shortfalls.

Ouzan asserts that the tech industry is somewhat unique in its orientation around product lifecycles, which call for niche expertise. In addition to bringing products from ideation to production, companies can use A.Team to inject missing skills into product teams, he says, or deliver supplementary teams to work on additional lines of business.

There’s interest in A.Team, clearly, with 25 new company clients joining the platform per month. Revenue grew 7.4x in 2021 and gross merchandise value (e.g. total revenue from sales) recently crossed $42 million, according to Ouzan, thanks to a customer base that includes McGraw Hill and The Economist. But as A.Team prepares to onboard 100 new companies per month, it remains to be seen whether the flexibility — and pay, for that matter — will continue to attract workers to the platform. It’s often a delicate balancing act with gig marketplaces. For example, early on in the pandemic, a flood of newly jobless employees cut deeply into gig worker incomes.

“Through modular, cloud-based teams, we’re empowering companies to elastically scale up and down their product resources based on the mission at hand and stage of product development,” Ouzan said. “A.Team is an entirely new way of working for the top product builders that have left FAANG companies and want the freedom to work on meaningful product missions with teammates they love. They work in teams on missions that last 12 to 19 months on average, and make $130 per hour on average. Making $100,000 a year on Fiverr is the outlier; at A.Team, it’s the starting point.”

A.Team’s funding came from a $55 million Series A round co-led by Tiger Global Management, Insight Partners and Spruce Capital Partners, and a previously undisclosed $5 million seed round. The seed round was led by NFX, joined by Box Group, Village Global and firstminute Capital, with participation from (unsurprisingly) a former Upwork CEO and co-founder of Fiverr.

Ouzan says that the capital will be put toward expanding the core A.Team platform and creating an ecosystem of independent product builders, companies, partners and investors. The company currently employs 75 people between staffers and contractors and expects to grow that number to 170 by 2022.