Tractian, a startup developing a product to monitor the status of machines and electrical infrastructure, today announced that it closed a $15 million Series A funding round led by Next47, with participation from Y Combinator and others. The money will be put toward product development and expanding Tractian’s workforce and geographic footprint, according to co-founder and co-CEO Igor Marinelli, as well as ongoing customer acquisition efforts.

Founded in 2019, Tractian is the brainchild of Y Combinator alumni Marinelli and Gabriel Lameirinhas. Prior to starting Tractian, they worked at a paper manufacturer, International Paper, as software engineers, where Marinelli says they noticed how backwards the systems were for monitoring machinery health.

“Industrial managers of any kind need traceability of work orders, and need to know the health of their machines from kilometers away from the operations,” Marinelli said. “[W]ithout the proper combination of hardware and software, you can’t solve the industry’s real challenge.”

Tractian’s flagship product, which Marinelli says is patent pending in the U.S., uses AI to identify mechanical problems a machine might be having by analyzing its “rotational assets,” like motors, pumps and compressors. Tractian can spot signs of looseness, imbalance and misalignment from vibration and temperature anomalies measured by custom sensors, Marinelli claims, in addition to potential electrical failures.

“Basically, the platform uses vibration, temperature, and electrical parameters data as well as information on the specifications of the monitored assets, such as power, rotation, fixation, assembly information, among others. The data can be divided into two groups: those referring to spectral analysis and those referring to temporal analysis,” Marinelli explained. “Spectrum data is used for deeper analysis to interpret the machine more directly. Through the spectrum, it is possible to recognize each of the internal components of a machine and how they are operating … In the case of machines, we are able to know which components are being activated and how they are being activated and thus identify failures.”

Tractian provides sensors that attach to — and send data about — machines via 3G or 4G cellular networks. The company’s software provides checklist and inspection steps for each machine, plus diagnostics, recommendations, alerts and scheduling tools and inventories.

“A model is only as accurate as the richness and relevance of its training data, so we place great value on the information used for training,” Marinelli added. “The models at first are generalist, being prepared for a global operation and not being individualized. However, from the moment we associate a branch of this model to a machine, it starts to learn the failure pattern for a specific machine.” 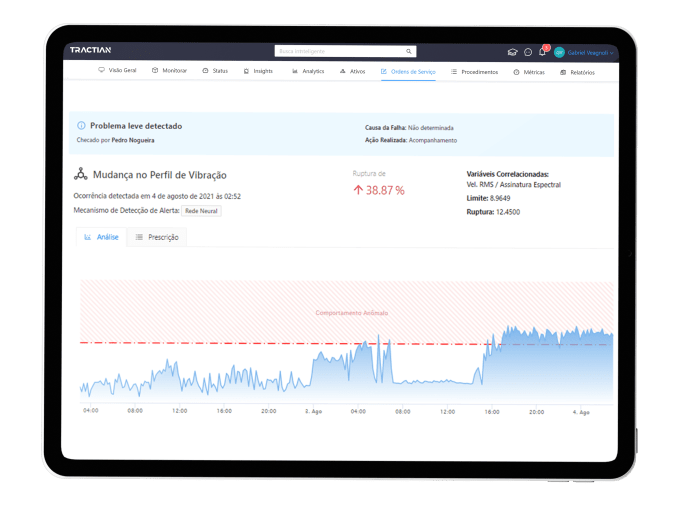 Marinelli readily acknowledges that Tractian isn’t the first to the machine analytics space. Predictive maintenance technologies have been used for decades in jet engines and gas turbines, and companies including Samsara, Augury, Upkeep and MaintainX offer solutions with capabilities similar to Tractian. In April, Amazon threw its hat in the ring with the general launch of Lookout for Equipment, a service that ingests sensor data from a customer’s industrial equipment and then trains a machine learning model to predict early warning signs of machine failure.

In a sign of the segment’s competitiveness, Augury just this month acquired Seebo, a startup that provided manufacturing teams with the insights to optimize their industrial processes. Augury is one of the better-funded startups in the sector, having raised nearly $300 million in venture capital to date.

But both Marinelli and Lameirinhas sense opportunity in a market that could be worth $12.3 billion by 2025. In 2018, Gartner predicted that by 2022, spend on internet of things-enabled predictive maintenance would increase to $12.9 billion, up from $3.4 billion in 2018.

While Marinelli noted that Tractian’s customer base of roughly 200 companies spans well-known brands like John Deere, Bosch, Embraer and Hyundai.

Looking ahead, the key for Tractian will be convincing would-be customers that its technology performs better than the rest. In a survey by McKinsey, analysts at the firm highlight the dangers of an under-performing predictive maintenance algorithm, claiming that one company saved over 10% on the breakdown of a piece of equipment using an algorithm but spent significantly more as a result of the algorithm’s high false-positive rate.

“[O]ur technology involves the same concept of Shazam, but for machines,” Marinelli said. “[Our] models are audited by an internal quality team, where we test the results obtained in a scientific approach in our laboratory, simulating failures and working with the development team to ensure accuracy. In addition to the internal audit, all generated inferences in production are validated directly by the client and they indicate the accuracy and application of the model through a real-time feedback system.”

In March, Tractian announced its expansion to North America, opening a new office in Mexico with a team dedicated to developing the company’s activities there. Tractian plans to follow up with market entry in Atlanta, Georgia later this year.

When reached for comment, Debjit Mukerji, a partner at Next47 who plans to join Tractian’s board of directors, said: “This is a critical space, the heartbeat of our economy. Next47 is thrilled to join Tractian on its mission to transform the maintenance experience for enterprises globally. Having followed this space for years, we concluded that frictionless deployment, intuitive user interfaces and a mobile/cloud-first approach are essential ingredients of success, particularly in the underserved medium enterprise segment. Tractian combines these in its extraordinary product vision and consistently delights its customers.”

Tractian currently has 100 employees and it expects to expand its headcount to 200 in the next 18 months. The company’s total capital raised stands at $19 million; Marinelli demurred when asked about the valuation.