Uber revealed a host of new platforms and features during its global product event, Go Get 2022, on Monday. The new products span Uber’s ride-hail and delivery services, and aim to increase ridership, open new lines of business, incentivize drivers to go electric and more.

The new features were highlighted during the event in a video starring comedian and co-creator of “Broad City,” Ilana Glazer, who demonstrated a day in the life of using the new Uber products.

Given Uber’s dependence on its mobility segment to bring in the most meaningful revenue, it makes sense that the company is pursuing new ways to attract, and retain, riders. From rider incentives to easier access to EVs, here are Uber’s new ride-hail related products. 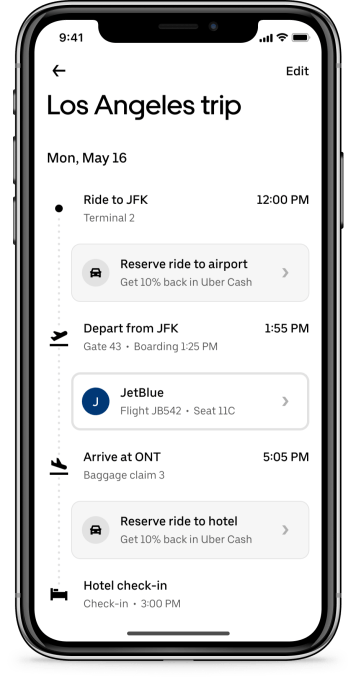 This feature is now available in major cities across the U.S., and will launch in Canada in the coming weeks, according to Uber. It’s not unlike another product the company released recently, which allows customers in select cities to book things like events and dinner reservations through the app.

Meanwhile, in the U.K., this feature will look a bit different. Uber will pilot giving users the ability to book trains, buses and car rentals, starting this summer.

Uber Charter, which is launching across the U.S. this summer, is a partnership with US Coachways, a nationwide bus service, that allows riders to book party buses, passenger vans and coach buses directly through the Uber app. Apparently, the service comes highly requested, according to an Uber spokesperson.

The benefit to users, along with upfront pricing, is that now, the problem of finding a safe way to move around while getting sloshed in wine country during a bachelorette party will require much less research.

Because Uber is really trying to secure that dough, now users across the U.S. can buy Uber vouchers for their events. Throwing a wedding or hosting a corporate function and want to make it easy to shuttle people around? Now, instead of individually calling your friends and employees an Uber, you can just share a unique code with them that will allow them to determine their own pickup and drop off times and locations. Users of this function will be able to set a limit on the max amount they want to cover, so it’s not an open bar tab all night.

Uber says this product also allows users to treat guests to vouchers for Uber Eats, because, why not?

The price point is something between an Uber Comfort and Uber Black, according to an Uber spokesperson. That hike in price might just go against the company’s Uber Green initiative, which promises no additional costs for booking an EV or hybrid.

This new product comes several months after Uber secured access to 50,000 Teslas in a partnership with Hertz.

This is a little somethin’ for the drivers. Uber has a stated goal of becoming a fully electric mobility platform by 2030 in the U.S. and Canada, and one way to appear to be supporting that goal while still offloading the costs of operations onto drivers is with this new product.

The charging map allows drivers to get information and incentives within the app on where the nearest chargers are located, the charging speeds at those locations and how to get there. The EV Hub gives drivers information about state and federal incentives for switching to EVs, discounts for certain EVs and a cost comparison tool.

The EV Hub will also likely include Uber’s own incentives to get drivers to switch to EVs, such as giving drivers who make the switch $1 more per trip, but only up to $4,000 annually.

The Hub is currently available for drivers in the U.S. and Canada, and will go global this year, says Uber. The charging map is set to launch this summer in the U.S. before expanding globally.

The end of 2021 finally brought Uber out of the red for its delivery segment. While revenue for Uber Eats isn’t exactly bringing the company into profitable territory just yet, it’s a fast-growing segment, especially as Uber expands into new verticals like alcohol and convenience store delivery.

With that in mind, the company is doubling down on ways to drive more profit in the delivery segment, from getting sports fans involved to piloting autonomous vehicles.

As James Clear, author of “Atomic Habits,” states, in order to make a habit stick, you have to remove the friction that stands in the way of action. If the action is ordering Uber Eats, then the friction is the labor of picking up your phone, opening the Uber Eats app, typing in what you’d like to eat, picking a restaurant and scheduling a delivery.

Now, by integrating Google Assistant into the Uber Eats platform, customers can more easily make a habit of sitting on the couch and ordering in dinner. All they have to do is say, “OK Google,” and ask their phone to order a meal from a restaurant on the app.

This feature is now available in English across the world, with more languages set to roll out this summer, according to Uber.

This one we can get behind. One of the main pleasures of going to watch a professional sports game is the junk food and beer, but it’s a bittersweet pleasure when the excessive line-waiting is taken into account. Now, when customers open the Uber Eats app within a participating stadium, they can place concessions orders and skip the line.

Uber Eats at stadiums is available in Los Angeles at Dodger Stadium and Angel Stadium; in New York at Yankee Stadium; in Washington, D.C. at Capital One Arena; in Houston at Minute Maid Park; in San Jose at PayPal Park; and most recently at Roazhon Park in Rennes, France with more to come, says the company.

New perks for Uber One

Uber One, Uber’s membership program, is delivering new perks for members with partners like Marriott Bonvoy, Clear and Obé Fitness. Those who join on Monday get one month free and $30 off their next delivery.

Uber One is also expanding to Mexico, Germany and the U.K., with more countries to follow, said Uber.