Roku is making its top-of-the-line device a better deal as competition with Fire TV heats up. The company today announced that its high-end Roku Ultra (originally $89) will now include the Roku Voice Remote Pro ($30) in a bundle that will be available for $99.99 at Roku.com today and at major retailers in the U.S. on May 15. If customers were to buy these two separately without the bundle, it would cost them $120. This bundle is a better option, as it saves you $20.

The Roku Ultra is the fastest Roku player to date and supports 4K video with HDR or Dolby Vision, as well as offers Dolby Atmos. The original Ultra bundle, which also cost $99.99 at launch, included the Roku Enhanced Remote. This was arguably a step-down from the Voice Remote Pro, which is the first and only Roku remote with hands-free voice control and a rechargeable battery.

Chris Larson, vice president of Retail Strategy, Roku, said in a statement, “At Roku, we are committed to providing our users with the best possible streaming experience with a focus on choice, value, and ease of use. With the release of the Roku Ultra and Roku Voice Remote Pro bundle, we’re adding even more, features to our most powerful player while keeping the price under $100, ensuring that high performance is readily accessible. With a click of a button or by using the remote’s hands-free voice commands, Roku Ultra users can access the content they want, set shortcuts for favorite channels, or find a lost remote without moving from the couch. The best just keeps getting better.” 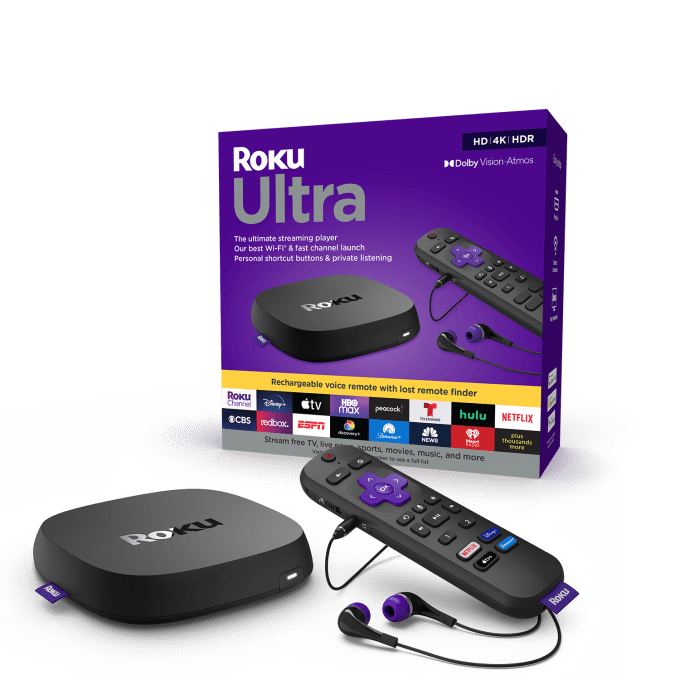 In addition to Dolby Vision and Dolby Atmos, the Roku Ultra comes with a fast channel launch, Bluetooth and Apple AirPlay 2. Meanwhile, the Roku Voice Remote Pro has personal shortcut buttons, a push-to-talk option and private listening with included headphones.

In September 2021, Roku had a similar bundle with the Streaming Stick 4K+ and the Roku Voice Remote Pro.