Software apps are increasingly cloud-based, distributed and updated at a breakneck pace. They’re growing more complex, in other words, which is becoming a major challenge for dev teams. A survey from Enterprise Strategy Group commissioned by Yotascale — which isn’t an impartial vendor, granted (if there is such a thing) — found that 84% of companies in 2022 considered tracking cloud cost allocation alone to be burdensome and time consuming. Sixty-one percent admitted they lacked “sufficient visibility” into which teams own which cloud resources.

If you ask Jeremy Burton, the solution is greater observability — i.e., tools to keep watch over all of an app’s components, from the back-end systems to the front-end interface. That’s not especially surprising from Burton, considering he’s the CEO of Observe, an observability platform developer co-started in 2017 by Jacob Leverich, Jonathan Trevor, Jon Watte and Philip Unterbrunner. But it’s not a stance without merit. According to a report form Techstrong Research and Testlio, 54% of developers can’t keep up with the demand for new and updated software, underlining the hurdles the industry faces in maintaining and releasing apps.

“Users experience problems with mobile or online apps every day: performance slowdowns, errors and even outages,” Burton told TechCrunch in an email interview. “Engineering teams can spend up to half their time on ‘unplanned work’ investigating and fixing these problems. It takes so long because the telemetry data that they use to analyze the problem is siloed — and specialized tools are used to look at each silo. A propellerhead who knows how everything is connected then needs to come along and stitch together the big picture.”

Burton and the rest of Observable’s founding team sought to fix the problem with a product that combines log analytics and monitoring with app performance management. Built on top of Snowflake’s cloud data platform, Observe ingests machine-generated data — almost 50 terabytes every day — and transforms it into “human-readable” data sets to form relationships between them. The relationships, which range from things like customer accounts to e-commerce shopping carts, can be used by devs to investigate why an app misbehaved, for example, or suffered an outage. 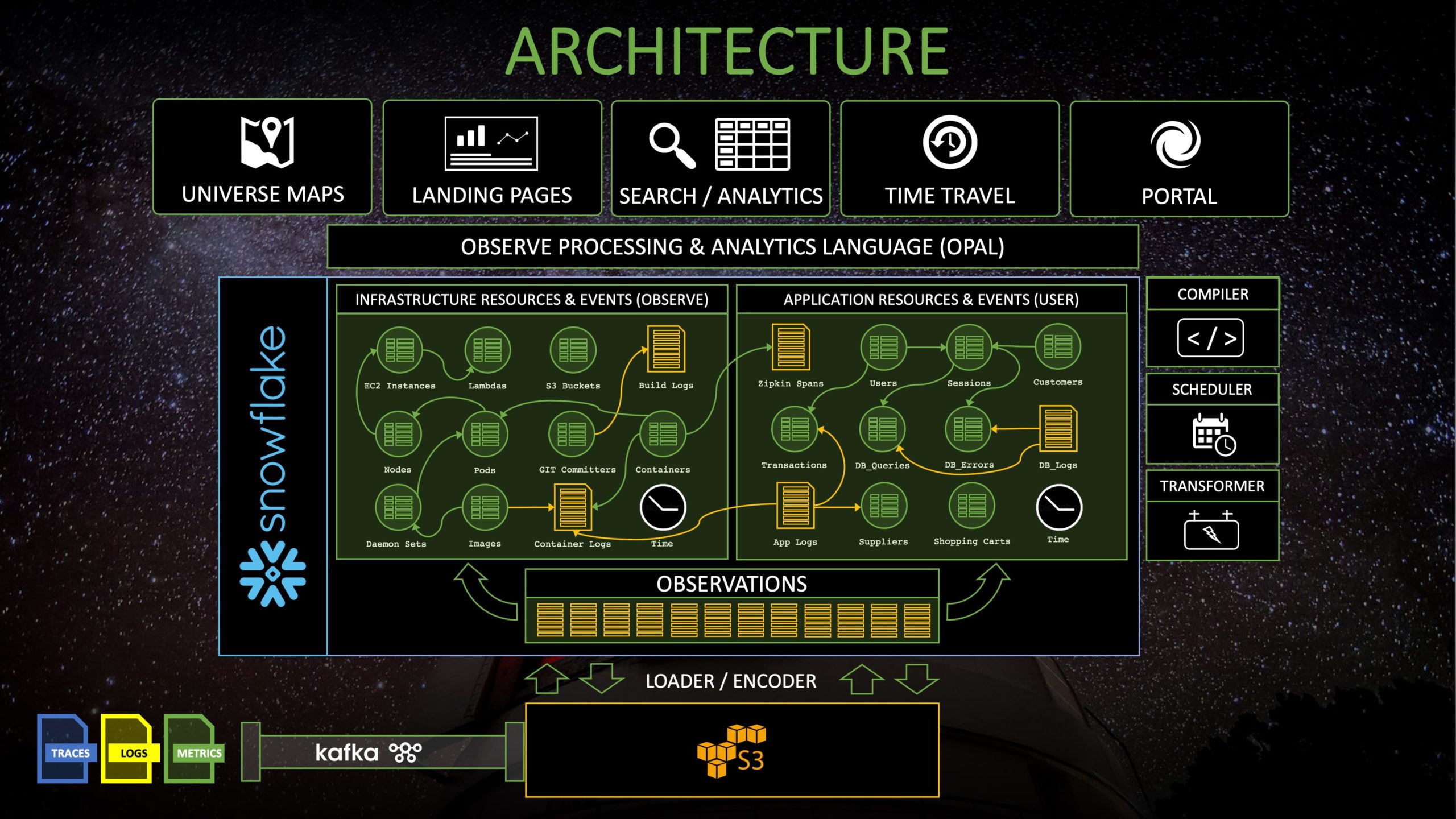 Observe launched in preview in 2020, and, in anticipation of expansion later this year, the company today closed a $70 million debt round between Sutter Hill Ventures, Capital One Ventures and Madrona Ventures. It brings the company’s total capital to date to $114.5 million.

Burton has a distinguished career, one unsurprisingly rooted in developer operations. Prior to co-founding Observable, Burton served as the SVP of product and services marketing at Oracle; was group president of Symantec’s enterprise security and data management division; headed EMC’s products group as president; and was chief marketing officer at Dell. Leverich was the director of engineering at Splunk while Unterbrunner was a founding engineer at Snowflake.

“The company was founded, like Snowflake and Pure Storage, by Sutter Hill Ventures back in late 2017. The founding team was recruited from Splunk, Snowflake, Wavefront and Roblox,” Burton said. “All the founders had a background in working with massive data volumes.”

Observe curates data from a company’s apps into “resources” like users, sessions, help desk tickets and software builds. Users can use the platform ask questions about the resources to see how they’re connected. Beyond this, they can track the state of how each resource’s attributes (e.g., IP addresses) change over time and provides levels of abstraction on top of the data, including automatically generated dashboards and worksheets with spreadsheet-like interfaces.

When asked about Observe’s data retention policies, Burton said that the platform keeps data for 13 months by default but can shorten or lengthen that window depending on a customer’s individual requirements. Customers can delete data on request, and Burton claims that data isn’t used for any purpose other than observability.

Burton isn’t ignorant of the competition in the observability solutions segment — which is fast-growing. Statista estimates that the sector will increase from $12.98 billion in worth in 2020 to $19.38 billion in 2024. Databand is among the startups offering products for observability, as well as Elastic, Datadog, Splunk and New Relic.

In addition to its analytics capabilities, Burton argues that Observe’s pricing model differentiates it from others on the market. Customers pay storage and querying costs, the former of which reflect current Amazon S3 pricing plus charges for processing data as it’s ingested. Querying data consumes usage-based “Observe credits.”

A $70 million debt round might not instill enormous confidence, but Burton says that the strategy is to use debt to increase Observe’s value before it converts to equity while minimizing dilution. Further attempting to allay any investor fears, he said that Observe’s annual contract value is in the millions of dollars and that the company plans to increase its headcount from 80 employees to 150 by the end of the year.

Observe has close to 50 customers at present, Burton claims, including Upstart Financial, OpenGov and Top Golf.

“This is particularly important when you are trying to solve really hard technical challenges which may take three to four years to bring to market,” Burton added, referring to the debt.

Sources of financing aside, Observe will have to convince skeptical devs that its tool solves some of the shortcomings of popular observability tools. In a Dimensional Research survey, 79% of respondents indicated that the overall cost of log observability and management will skyrocket in 2022 if current tools don’t evolve. With eight months left in the year, we’ll have to see whether that’s the case.