Patreon announced the results of its first creator census, which invited the community to share feedback about how the fan membership platform can best support independent creatives. Out of 250,000 creators active on Patreon, over 13,000 people responded to the survey, representing 113 countries and 18 languages.

According to the survey, video is the most popular primary medium on Patreon, representing 38% of respondents. The next most popular categories are writing (17%) and podcasting (14%). Fifty-six percent of Patreon creators consider themselves closer to being seasoned professionals, while 44% say they’re closer to just starting out. Interestingly enough, respondents also said that over 40% of their creative income came from Patreon. 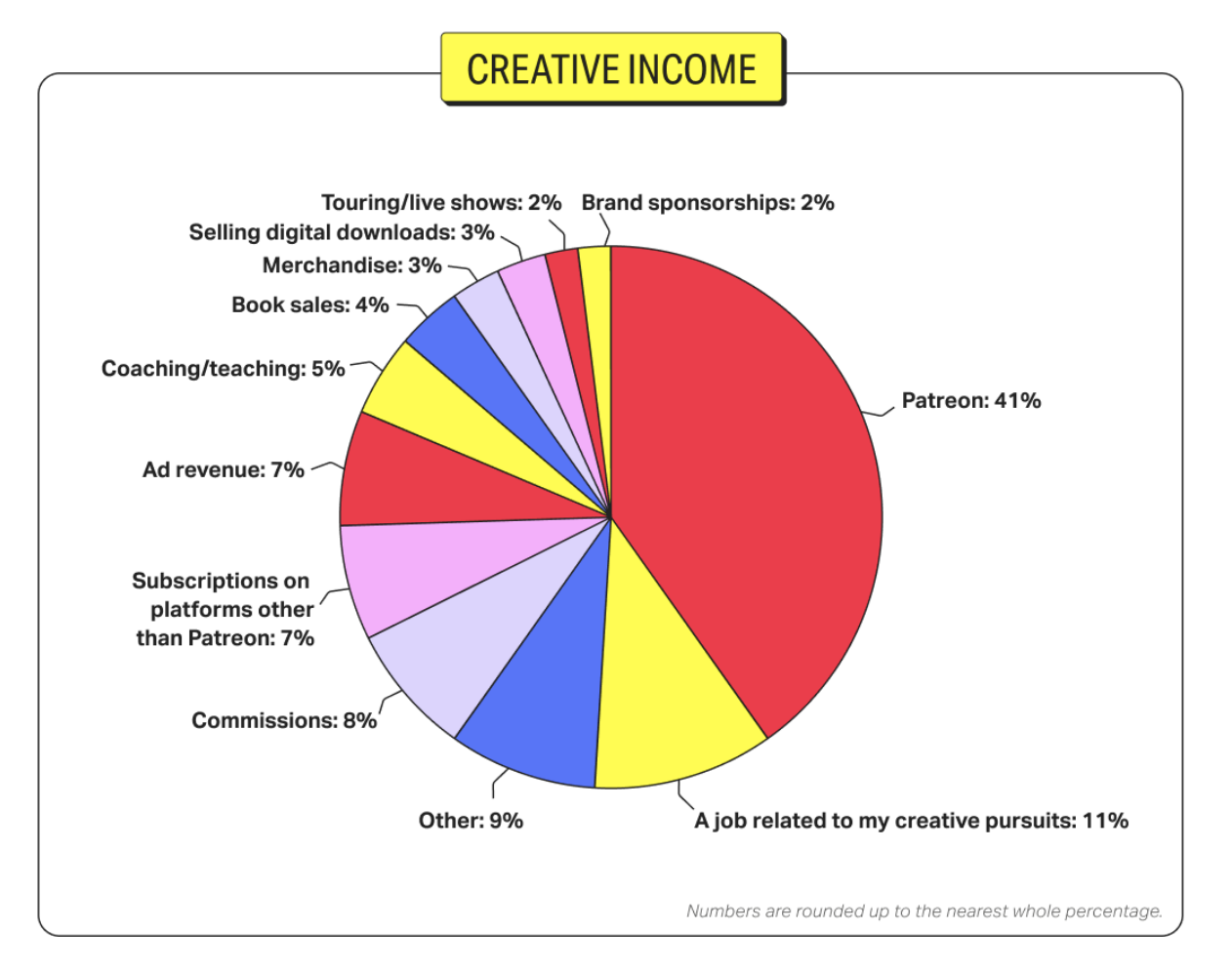 Linktree, the link-in-bio monetization platform, also recently conducted a survey of 9,500 creators. Both Linktree and Patreon reported that brand sponsorships don’t make up as much of creator earnings as we previously thought — Linktree said that 70% of creators earn less than 10% of their earnings from brand deals, while Patreon creators reported that this makes up 2% of their income. Still, these results could be skewed since it’s a holistic report of creators from all genres. Tours and live shows are a huge part of musicians’ income, for example, but Patreon’s data says it makes up just 2% of creators’ income. That’s probably because musicians don’t make up a large portion of Patreon creators (plus, touring hasn’t been too feasible over the last few years because … you know).

Patreon also surveyed creators about their priorities for future Patreon products. Over the last several months, Patreon executives like CEO Jack Conte and CPO Julian Gutman have said that the company has been interested in exploring whether crypto tools could help creators make money. Through its Creator Policy Engagement Program, Patreon even floated the idea of creator coins as an avenue for monetization. Gutman told TechCrunch in December that the company had considered building a small crypto team to examine potential options, but that there weren’t any plans set in stone for a plunge into web3.

“It’s not, ‘Hey, let’s go build an NFT platform right now,’ but you know, a couple of folks that are focused on this full time,” Gutman said at the time. “And by the way, they might conclude, ‘Hey, you know what, there’s nothing for us to build here right now,’ which is a totally fine, reasonable conclusion.”

But feedback from the creator census showed that 43% of creators are strongly against crypto payments, while 30% said they don’t care. Nine percent said crypto payments would be crucial, while 18% said they would be nice to have. 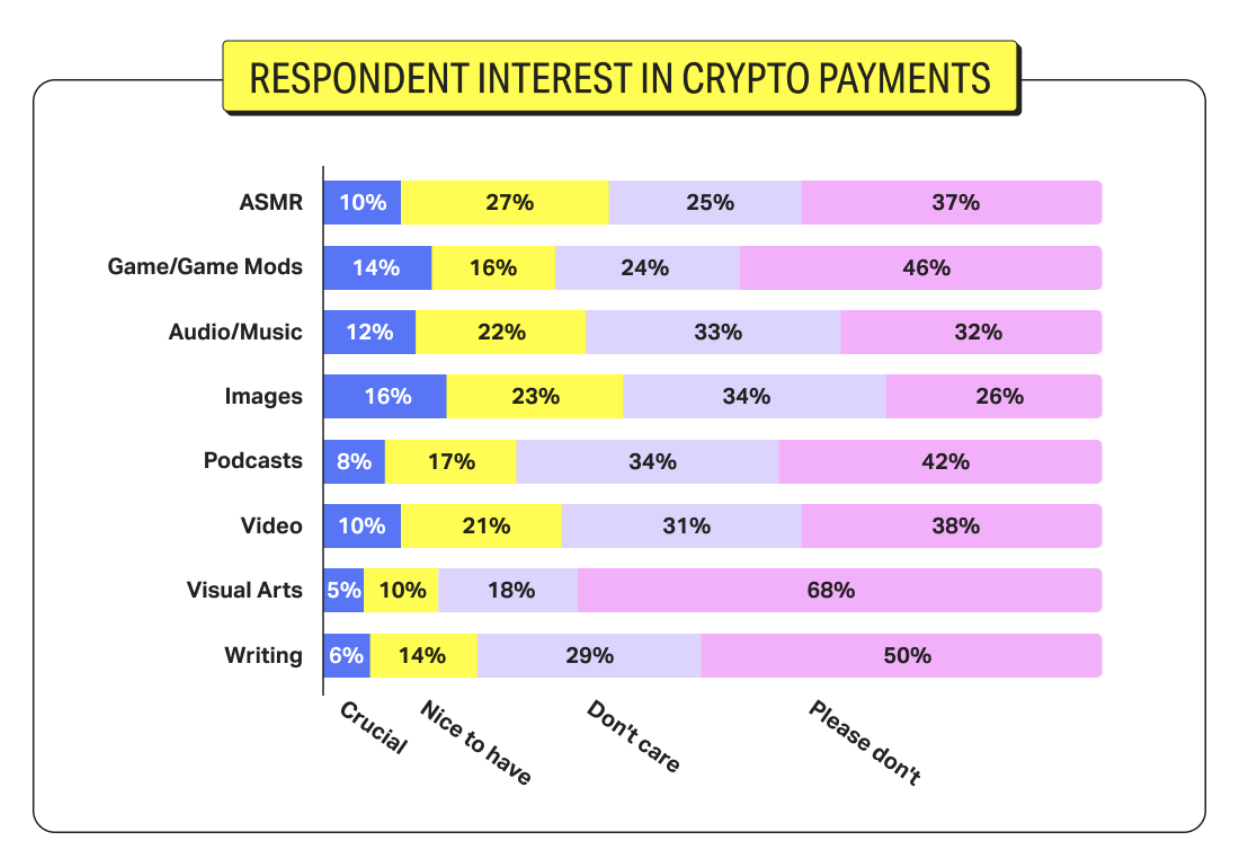 “Some creators, including many who took this survey, are opposed to Patreon building any web3 functionality due to concerns about potential fraudulent behavior, environmental sustainability and inaccessibility of the technology in its present applications,” the census report said. “Other creators already offer web3 benefits off Patreon and are excited about the flexibility and value they can offer memberships with new types of digital goods.”

Sure, crypto skeptics could simply just not use web3 features with their audience. But some creators worry that their audience will be less likely to support them via Patreon if the company dabbles in web3.

“Any creator becomes like customer service and a representative for any of the services that you use,” Multitude Productions CEO Amanda McLoughlin told TechCrunch last year, noting that patrons had reached out to her in the past with concerns about Patreon pivoting to crypto. For small business owners that make a significant chunk of their income from fan memberships on Patreon, these seemingly small feature updates can make a serious impact.

“Our focus continues to be on how to give creators more ownership and leverage over their content, and that includes exploring the benefits of web3 technologies,” Patreon said in an email to TechCrunch. “However, neither our creators nor Patreon are prioritizing this space right now.”

Only 12% of full-time creators make over $50K a year, says Linktree