Twitter didn’t have as many users as it thought — a predicament that may have encouraged the company to more seriously consider its acceptance of Elon Musk’s proposal to take the company private in a $44 billion deal. According to Twitter’s Q1 2022 earnings out this morning, the company admits it had been overcounting the number of users on its service for at least three years due to a technical error involving linked accounts.

In its earnings release, Twitter explains that it launched an account linking feature in March 2019 that allowed users with more than one Twitter account to link them together in its user interface, allowing them to more easily switch between their different identities. Those multiple accounts belonged to a single person, clearly, but continued to be counted as separate mDAUs — or “monetizable daily active users.”

The mDAU metric was already a self-invented, non-standard way of measuring users on the service. Twitter came up with the idea after struggling to show growth through measurements of monthly active users on a quarterly basis. Instead, it said the mDAU metric would represent users who logged in and accessed Twitter on any given day through its website and applications and who were able to view its ads. It noted, however, that the metric would not be comparable to similar daily active user disclosures from other companies, as they would often use a more expansive metric that included users who were not seeing ads.

This metric was meant to give advertisers a better idea of how many people on Twitter were eligible to be targeted with their marketing messages within a given time frame. And since advertising continues to fuel Twitter’s business, accounting for the majority of its revenue, it was an important metric in terms of Twitter’s health.

Unfortunately, it was wrong.

Twitter says it re-ran the numbers for the mDAU metric for the past quarters where it had found it had been overcounting, and adjusted the totals. Its findings indicated it was overstating mDAUs by anywhere from 1.4 million to as much as 1.9 million, depending on the quarter. (The company noted the recast data was not available prior to Q4 2020 due to its data retention policies, but said its estimates suggested the prior period adjustments would not be greater than those seen in Q4 2020.) 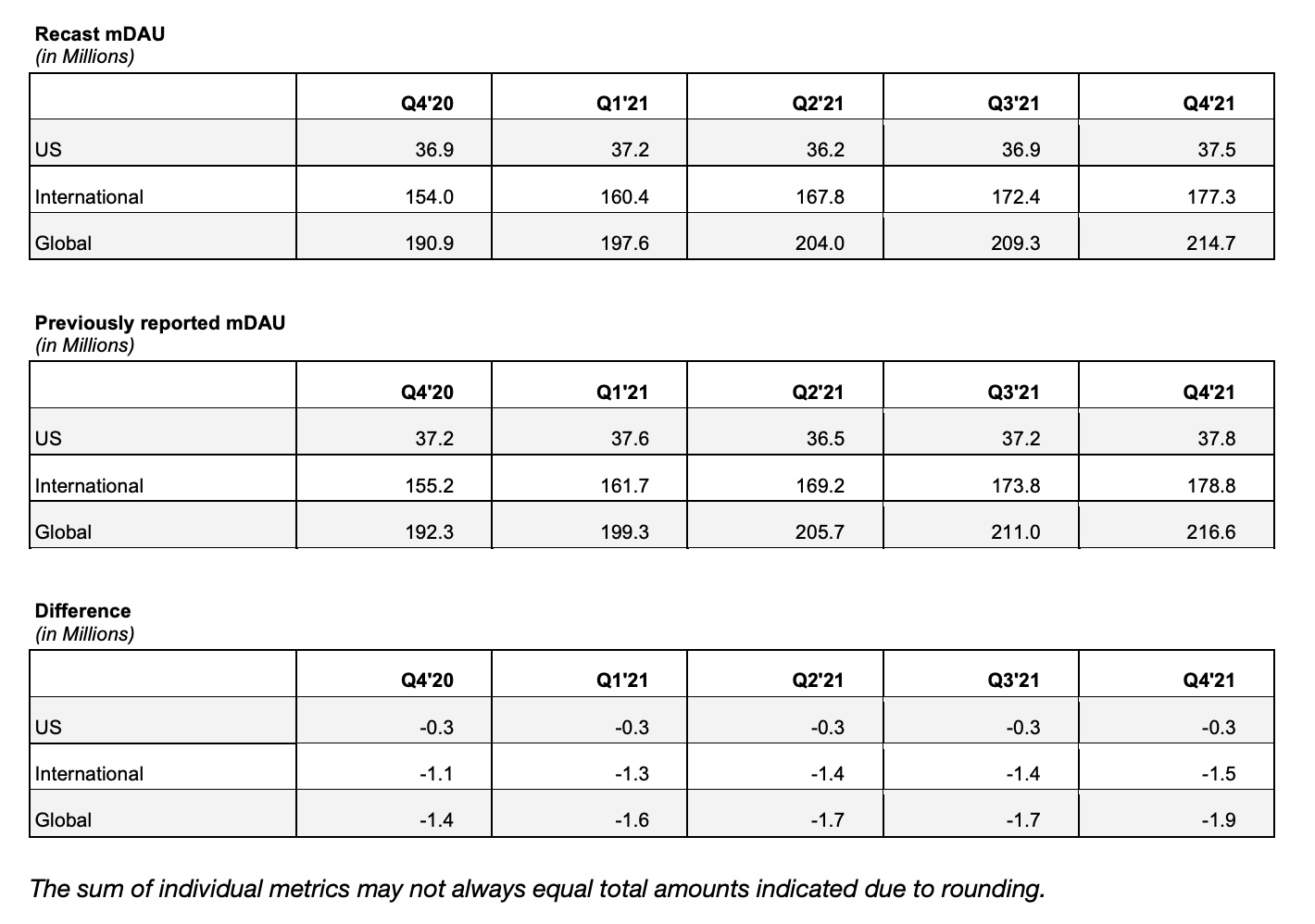 As you can tell by the chart, as Twitter’s overall user base slowly grew, so did the overcounting — ending with an overstatement of nearly 2 million more mDAUs than the company actually had.

Such an adjustment would barely be a blip to a rival social network like Facebook — Meta just reported its family of applications saw 2.87 billion daily active users in Q1 2022, for example, and Facebook alone saw 1.96 billion. But it does matter more on a service as small as Twitter that has historically struggled with flat user growth. In fact, user growth had been such a thorn in its side that it had invented that new metric to better hide its issues in the first place.

Despite the adjustment, Twitter ended the quarter with a presumably now accurate 229 million mDAUs, up 15.9% from the same time last year, and topping analyst estimates of 226.9 million.

However, the company had set a lofty goal of reaching 315 million mDAUs by 2023 alongside a doubling of revenue. That mDAU goal would have represented a roughly 20% compound annual growth rate from its base of 152 million mDAUs reported in Q4 2019. Twitter believed it could get there by way of its new product developments, many of which were monetizable — like Super Follow subscriptions, ticketed Twitter Spaces, and the premium subscription service Twitter Blue. But it’s clear Twitter still had far to go to make those investments pay off, not only in dollars and cents, but also in attracting newcomers to the network.

This is not the first time Twitter reported erroneous metrics around users, but it is the first time it’s impacted Twitter since the switch to mDAUs. The company in Q3 2017 admitted it had overcounted its MAUs by 1 to 2 million, at a time when its MAU base was over 300 million.

The error could put Twitter in even a more precarious situation with regard to its advertisers. Elon Musk has been preaching a plan to embrace a “free speech” policy on Twitter, which often means a more permissive attitude toward abuse, bullying and hate speech. That’s not something brands want to market themselves against.

There are signs that advertisers are nervous, too.

AdAge reported the immediate reaction from advertisers was one of anxiety and confusion. Brands were reaching out to agencies to help them understand and prepare for what comes next at Twitter. One agency exec said there were also signals that advertisers are prepared to stop spending after Musk’s takeover, if need be.

Twitter, in response, emailed advertisers insisting that it will remain a safe place for brands after the Musk takeover, the FT reported. It had heard similar concerns from advertisers who are taking a “wait and see” approach for now, before adjusting their budgets. One group of advertisers is more worried, however: automakers. They fear their marketing campaigns will now leak to their rival, Tesla, which Musk also heads. CEO of EV maker Fisker, Henrik Fisker, already deleted his Twitter account, for instance.

If Musk makes Twitter less palatable for advertisers, it has few avenues to recoup lost incomes

Despite Twitter’s assurances, it’s a promise advertisers know it can’t really keep if Musk decides to make more radical changes. For a company as dependent on advertising revenues as Twitter currently is, it’s a wonder why they would agree to a deal that puts a free speech absolutionist in charge. Twitter’s miscounting of users helps, in part, to explain why it took the deal — because the growth it believed it had achieved was smaller than it thought.