The crypto-based decentralized finance ecosystem has, despite bouts of volatility, been ballooning in terms of assets since last year’s “DeFi summer.”

DeFi is quickly maturing, which means startups are spinning up new products left and right — many of which are just blockchain-based versions of products that already exist in the traditional financial system. I’ve written before about Cega, for example, which earned a $60 million valuation at its seed round last month to build DeFi-based exotic derivatives.

Ondo, founded by two alums of Goldman Sachs’ digital assets team, is capitalizing on crypto’s capital markets by building what it calls a “decentralized investment bank.” What that means is that Ondo acts as an intermediary between DAOs (decentralized autonomous organizations) that, like traditionally structured companies, need to raise money to fund their operations, and the investors who can provide them with that money.

But DeFi is incredibly risky compared to traditional lending because it’s still an emerging space, so investors sitting on huge pools of capital who aren’t as comfortable with crypto are still somewhat skeptical of investing in the ecosystem, Ondo CEO and co-founder Nathan Allman told TechCrunch.

That makes it hard for DAOs representing new blockchain projects to raise funds, which is exactly where Ondo comes in, by selling traditionally minded investors potentially less risky products through which they can provide financing to capital-hungry DAOs, according to the company. Investors, in turn, get to earn much higher interest by making DeFi loans than they would by making traditional loans in today’s low-rate environment. 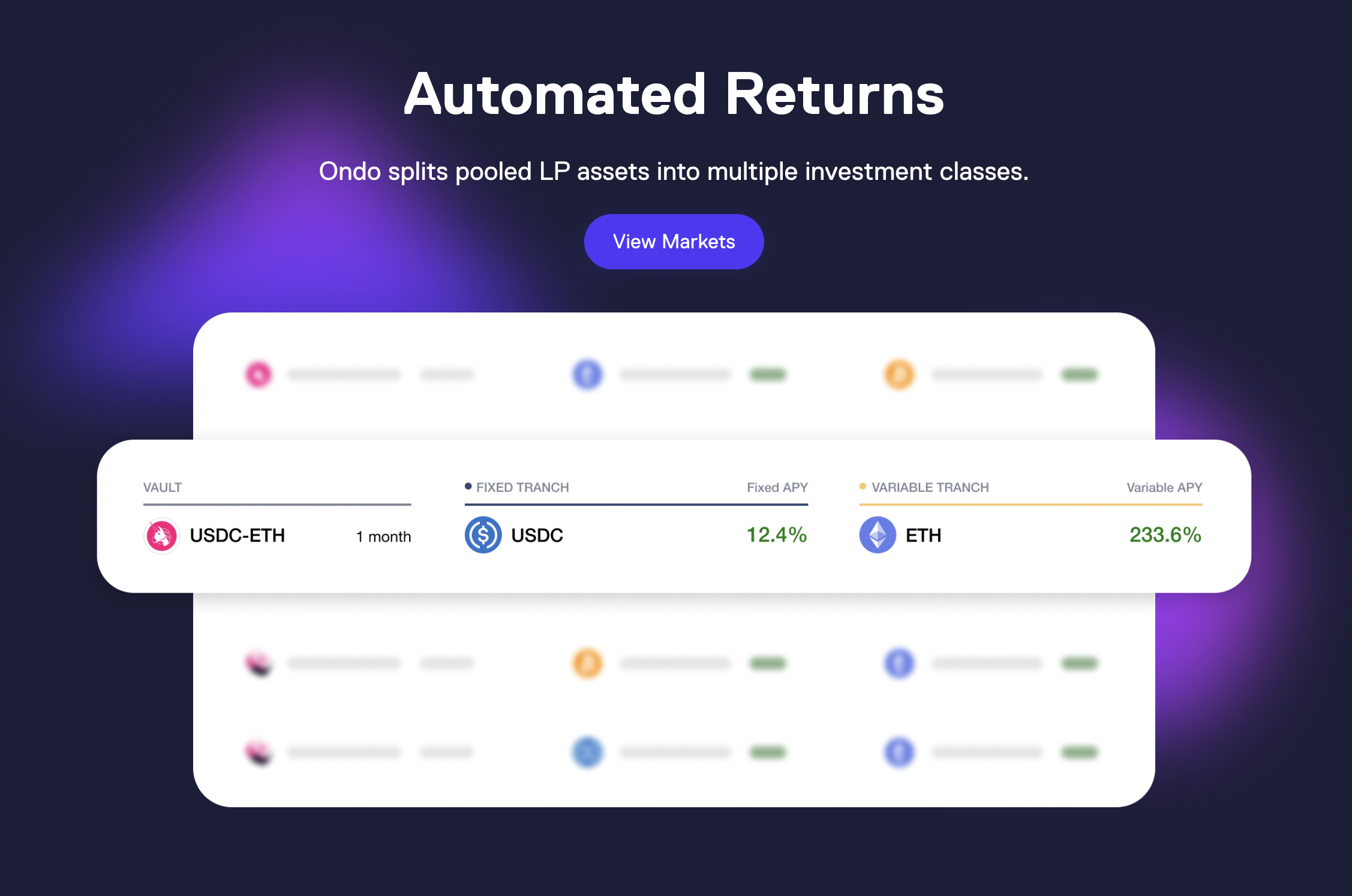 Ondo offers “vaults” to investors that bundle DeFi products with different risk levels together into one product, allowing them to hedge potential downside, Allman said. The multi-tranche vaults work similarly to collateralized debt obligations (CDOs), wherein risky loans are paired with less risky loans and offered to investors in tranches, he explained.

Risk-averse investors can invest in a “fixed tranche” from Ondo, which entitles them to the same rights as senior debtholders, in that they’ll invest in the entire CDO, but will be paid back before other investors in the event that there are any defaults within the vault.

These fixed-tranche investors don’t have to bear the repercussions of default as deeply as the “variable-tranche” investors (essentially the junior debtholders), so they accept a lower rate of return for the product in exchange for being able to take less risk. While Ondo’s safer, fixed-tranche offerings could be “the marginal entrance into DeFi” for both institutional and retail investors, DeFi yield farmers or crypto-native risk-takers tend to want to invest in the leveraged variable tranches, so Ondo’s products appeal to them, too, according to Allman.

Ondo launched just over a year ago with its vaults, and in typical crypto startup fashion, raised its seed round in a matter of months, bringing in $4 million led by Pantera Capital, Allman said.

Since its initial product offering, Ondo has introduced what it calls “liquidity-as-a-service” matching DAOs with underwriters, usually stablecoin issuers, who can provide the DAOs with liquidity for their native tokens, according to Allman.

For DAOs with newly launched tokens that can be volatile in value and aren’t initially usable as currency, the advantage is clear — they get liquid currency in the form of stablecoins that they can invest in their business until their own native tokens are mature enough to transact with. Stablecoin issuers, much like banks, make money by providing the liquidity these nascent DAOs need. Ondo has partnered with over 10 DAOs, including Terra, Frax and Fei, and works with multiple large stablecoin issuers, according to Allman.

The liquidity-as-a-service product “represented a bit of an expansion of the vision for us from what we used to call structured products for DeFi, to now, this vision of a decentralized investment bank, which encompasses decentralized exchange market-making, and even a kind of direct listing offering that we can use to establish the first liquidity for new tokens,” Allman said.

Ondo announced today that it has raised a $20 million Series A round, this time co-led by Pantera alongside Founders Fund. Coinbase Ventures, GoldenTree, Wintermute, Steel Perlot, Tiger Global and Flow Traders participated in the round as new strategic investors.

The 17-person startup plans to grow its team and expand its product offering with the new capital. Its plans include the upcoming launch of Ondo’s own token and associated DAO, so the company can make governance decisions in a more decentralized, permissionless way, Allman said.

It also plans to continue adding to its suite of structured products with vaults that bundle yields from algorithmic stablecoins as well as ones that aggregate yield across different blockchains, according to Allman. 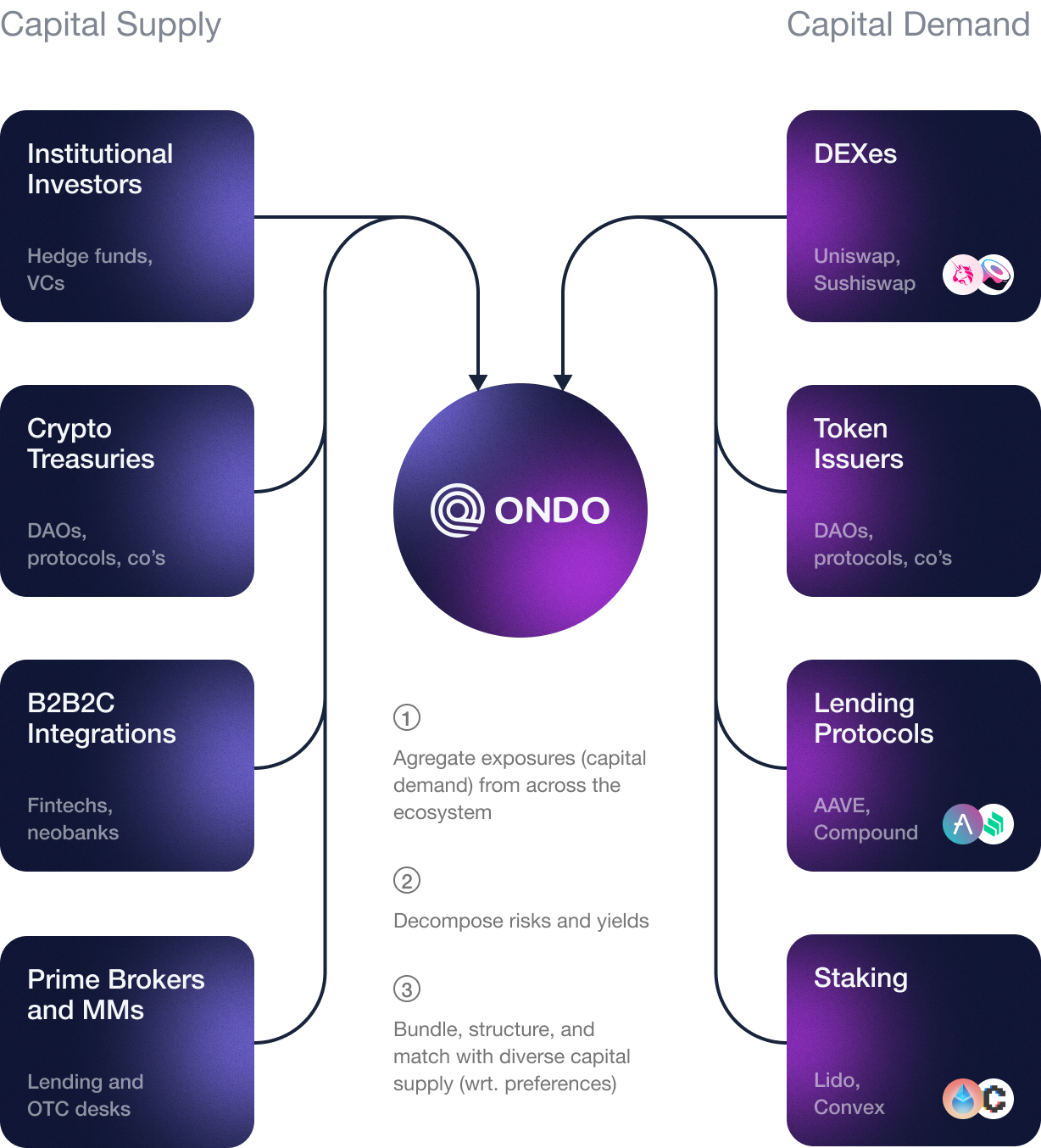 Ondo is primarily focused on building many of the functions typically associated with the middle and back office of an investment bank on-chain, Allman explained, noting that it does not currently have plans to directly offer advisory services to DAOs or crypto companies as a traditional investment bank might.

“The vision now is really this sort of bundled set of financial services, very analogous to those that an investment bank provides, but where the contracts are all executed on-chain, instead of 300 or 400-page, legal agreements,” Allman said. “The target audience that we’re serving today are certainly DAOs and crypto investors. As that marketplace expands and becomes more traditional, so will our business.”