Copper, a digital banking service aimed at teens, has raised $29 million in Series A funding in a “preemptive” round led by Fiat Ventures.

The investment comes just over seven months after the startup revealed it had raised $9 million in a seed round, and included participation from Panoramic Ventures, Insight Partners, Invesco Private Capital and “all existing investors,” according to the company. It has now raised a total of $42.3 million since its 2019 inception.

Since its launch last May, Copper has grown to have more than 800,000 users. That’s up from 350,000 last October. While the company would not reveal its valuation or hard revenue figures, it did say that its revenue growth is in line with its user growth, which — as noted above — has more than doubled since October 2021.

Parents use Copper to send money to teens and monitor their teens’ spending, the company touts. Teens can do things like set up direct-deposit for after-school and summer jobs and pay friends using P2P transfers. The fintech also offers tips on what it describes as “finance fundamentals” such as dividends, budgeting and compound interest.

Over the last year, Copper has been gearing up to expand into investing, with plans to onboard its first group of customers within the next month. The startup aims to give its customers the ability to direct funds from their accounts into a “wide range” of investments — from stocks to mutual funds to cryptocurrency. The move was in part based on demand from its users, according to CEO and co-founder Eddie Behringer.

“It was really driven by a tremendous amount of demand from teens. And then when we asked parents about it, this was the one financial topic that they assigned the highest value — as far as us being able to provide their teens access, and then really the education behind that access,” he told TechCrunch.

Further reasoning behind the move, added Behringer, was that it would support the company’s mission of being a teen’s “financial first.” Also, Copper wants to give teens “a safe space” in which to invest overall, but especially in crypto, the executive added. 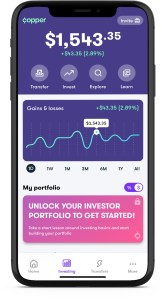 “What we’ve seen is that despite parents’ best intentions, teens are getting access to investing and cryptocurrency,” he told TechCrunch. “So at the highest level, this was about ‘How do we provide teens access and freedom in an environment that is really based on safe controls by parents’,” Behringer told TechCrunch. “We knew teens were getting access to Robinhood, for example, which is completely incentivized around monetization on frequent trading. We set about building a product that worked in a complete opposite fashion.”

Investing through Copper, the company claims, gives teens a supervised setting where they “can learn as they invest, and where parents can see where every dollar is going.”

Copper is among several teen-focused fintechs that have recently expanded their offerings to include a crypto component. Step, a Series C fintech app providing banking services to teenagers, recently announced that it would be offering a new product that will enable its 3 million-plus users to invest in equities and cryptocurrencies on its app. The company plans to launch the new product, Step Investing, sometime early this summer.

As Anita Ramaswamy previously reported, investing app Onu launched custodial accounts for children with access to 22 cryptocurrencies last month, and children’s social network Zigazoo started dropping NFTs in April. And earlier this year, Acorns CEO Noah Kerner told TechCrunch that the youth-focused savings and investing startup plans to include “no more than 5% exposure” to crypto as an option for customers who would like to participate, according to Kerner, who emphasized there “will not be crypto trading on the Acorns platform.”

Meanwhile, Copper hopes to beat its competitors to market and it intends to continue to grow in large part by employing an offline strategy.

Behringer and CFO and co-founder Stefan Berglund previously co-founded Snap! Raise, a youth-oriented crowdfunding platform that has raised over $90 million in venture funding. The pair attribute Snap! Raise’s success to deep grassroots-level relationships in high schools. They are emulating that model to power Copper’s growth and say that it acquires over 60% of its new customers through word of mouth.

Copper makes its revenue primarily from interchange fees. It also can make money if a parent funds their account instantly through a feature it offers called “Instant debit load,” although according to Behringer, the “large majority” of parents fund their accounts via ACH using Plaid for no cost.

The way Fiat Ventures learned of, and then sought to invest in, Copper was not a traditional one. The firm is actually the venture arm of a marketing agency for early-stage fintechs called Fiat Growth. The startup had been working with that agency since its inception, which gave Fiat insight into its growth.

“They were able to see our growth metrics from the inside and very quickly put together a term sheet when we weren’t actively raising,” Behringer told TechCrunch. “Their unique model allowed them to preempt our funding plans.”

Fiat Ventures General Partner Alex Harris, who was head of growth at digital bank Chime in its early days, is joining Copper’s board as part of the financing. He told TechCrunch that witnessing the “massive acceleration” in Copper’s product and traction prompted his agency to lean in from the venture side.

“At Chime, I had a front seat when the early market leader, Simple, was forced to sell due to unsustainable economics. When I started, Simple was Goliath and Chime was David,” Harris recalls. “Through disciplined economics, smart acquisition tactics and deep industry expertise, Chime was able to become the clear market leader.”

“I see the same parallels here for Copper,” he continued. “Copper has kept sustainable economics in mind since day one…Their key performance metrics have been better than competitors by a wide margin with incredible word-of-mouth growth and a unique and powerful grassroots distribution strategy.”