A new startup called Skich wants to help mobile users find games to play that better match their interests. To do so, it’s created a game recommendation app that carefully toes the line in order to not bump up against Apple’s App Store rule that prohibits other apps from acting as App Stores themselves.

Instead, Skich simply lets you “match” with games you might like using a card-style interface, similar to a dating app like Tinder. Here, a left swipe indicates you’re passing on the game and a right swipe adds the game to your “Want” list — a collection of games that you want to try. You can also swipe up to read more about the game in question.

In your “Want’ list, tapping the link on the game will redirect users directly to the App Store or Google Play — depending on your platform — to download the title you want to check out.

There are no financial incentives to either like or install individual games in Skich, so this is not a paid user acquisition channel in that sense. Users aren’t promised in-game rewards, virtual currency or anything else. It’s just a recommendation. Upon first launch, users simply tap on the categories of games they most enjoy  — like board, adventure, card, casino, educational, strategy, word, racing, sports, casual, puzzle, and others. Using this initial input, Skich will customize its feed of games to the end user.  And if you see a game you’ve already tried, you can tap the “Played” button then optionally respond with an emoji and review detailing how much you enjoyed (or didn’t enjoy) the game’s experience.

The company says it started off by gathering some of the most popular games on the app stores, then showing them to users as recommendations. Users can also suggest the games they want to see in the app. Skich wants to work more closely with developers in the future, but that’s not part of its current model.

Where the product gets more interesting is in its potential social mechanic — something that could work out if the app is able to scale to reach a larger number of users than it has today. In Skich’s “Activity” section, you can see what games your friends and other influencers using the app have been playing and read their ratings and reviews. (This part does simulate an App Store to some extent, as it could siphon user rating and review activity over to a third-party destination…Apple might not like that!) 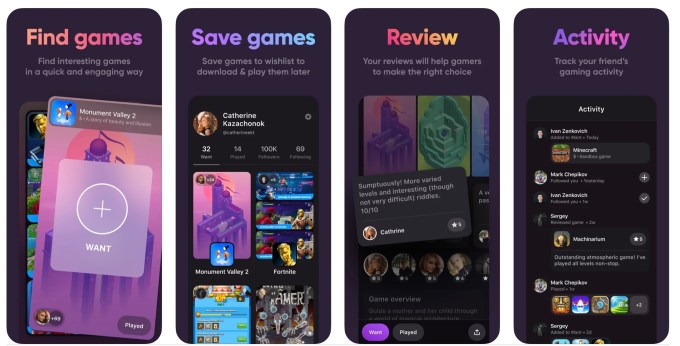 Social recommendations remain an area today’s app stores don’t address. While you can read reviews from various strangers, there’s no way to see if a particular title is popular among your own friend group or influencers whose opinions you respect.

That means mobile gamers are left to browsing the web for write-ups of games or they have to rely on the app stores’ top charts and editorial collections and curation of various games. But the app stores’ incentives for which games get featured don’t necessarily align with a player’s interests. For instance, the App Store may want to promote games taking advantage of its latest technologies or App Store features, like in-app events.

Meanwhile, for game developers to find users, they still turn to online, social, and in-game ads to get their game noticed. Skich, potentially, would give them another avenue — suggestions from friends. The challenge, of course, is getting Skich to scale and helping users build out that trusted network of friend-to-friend recommendations.

During tests, we found the product was slow to load some screens and media. A spinning “loading” icon displayed on the Activity screen, making the experience seem broken. A link to the privacy policy was also broken but is now fixed. There wasn’t a way to find friends besides browsing a list, and adding them. In other words, there’s much to be improved.

But the concept itself is interesting as it pokes at a hole in today’s app stores: an inability to discover apps through personal recommendations, not just editorial picks.

Skich co-founder and CEO Sergey Budkovski, originally from Belarus, was previously head of biz dev at Minsk-based design and development firm 69pixels before founding the startup. Now based in Poland, the four-person team reports Skich has undergone its MVP phase on the App Store and has raised some pre-seed funding. During tests with 6,000+ users, Skich saw a 21.5% retention rate globally after its first week, and 30% of the testers would follow other app users; a further 29% would review games. Most critically, 55% of the MVP testers found a game to try and went to the app store to download it.

The startup believes the potential for its game-finding experience is huge — there are around 3 billion mobile gamers worldwide and hundreds of games are launched daily. But it will have to compete with the many ways users today discover games, including through increasingly popular social games, like TikTok.

The company is also staying quiet about its monetization plans.

“We have some ideas, but probably it`s too early to share them so far,” says Budkovski. “The main goal at the moment is to develop a nice product for gamers and game developers. Gamers want new games, new games need gamers.”

He stressed, however, the app will not sell user data and has no plans to do so. But until we hear more about how this app will keep itself afloat financially, we’ll withhold judgment as to its potential for success. In the meantime, it’s a fun way to find some new stuff to play and we’ll leave it at that.

Skich last week closed on $400,000 in pre-seed funding from Gem Capital, which today has an existing games portfolio, which was part of the appeal. Ilya Lesun, Vochi’s co-founder who exited to Pinterest, is also advising the company.

With the new funds, Skich aims to have 10 employees by year-end. The app is available on iOS and Android.