In today’s highly competitive streaming market, streaming services don’t just have to figure out how to attract users — they also have to find ways to keep them. Fandom’s “2022 State of Streaming” report may be able to offer some new insights on this front. The report examines fan behavior to uncover key findings such as the reason behind churn, how streaming services can increase retention and ways to boost subscriber loyalty by differentiating themselves from competitors.

This analysis was conducted by Fandom, a home to entertainment fan communities across TV, mobiles, games and more. The company coupled its sizable user data alongside a custom global study. Fandom has more than 300 million monthly visitors and over 250,000 fan-powered wikis.

According to the recent study, 62% of viewers claim that genre is the key differentiator, with Disney+ being the leader in this area. Also, 73% of viewers valued streaming services way more if it had films and shows they can’t find anywhere else. 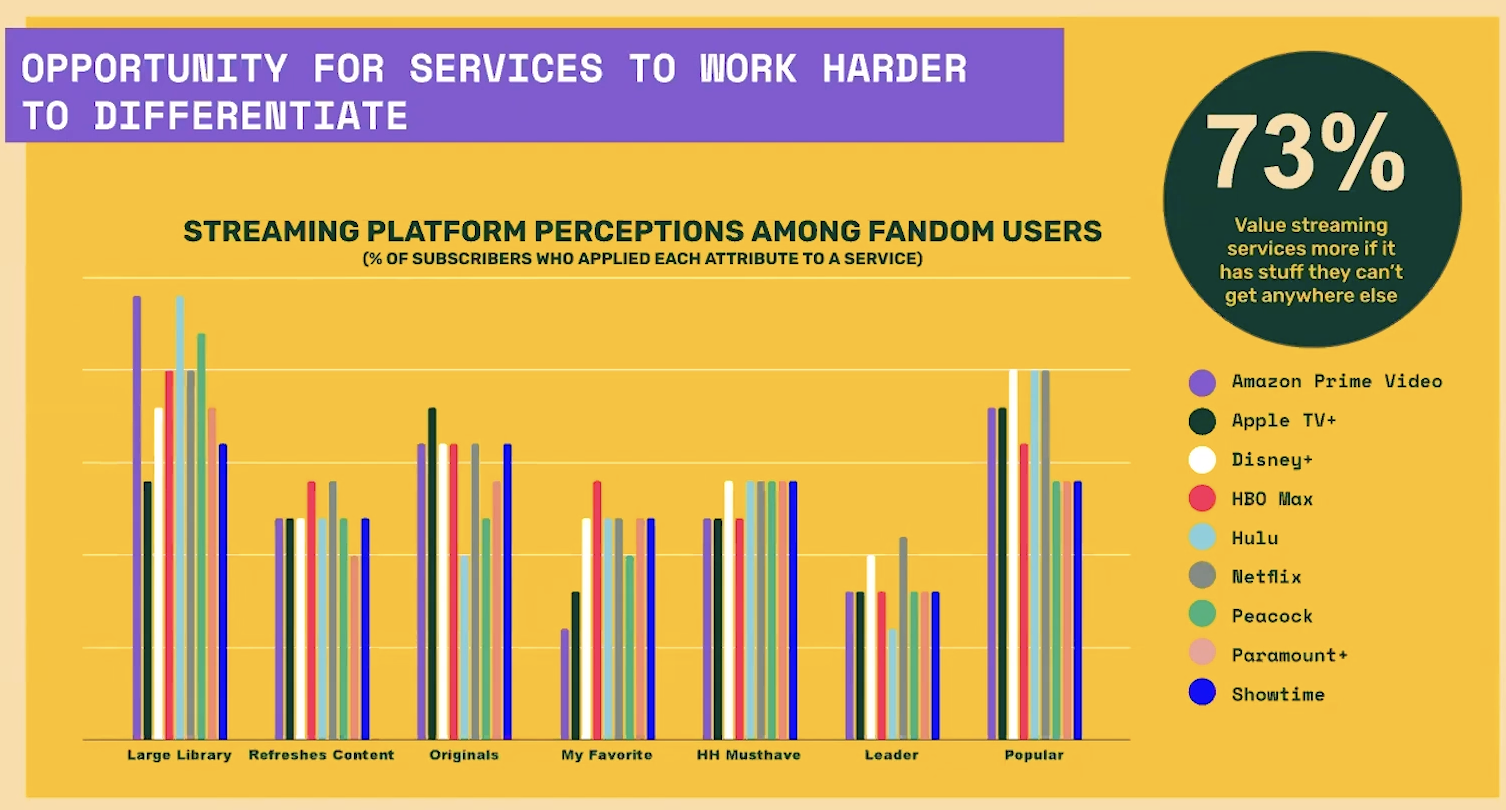 Nineteen percent of consumers don’t have a strong allegiance to one streaming service over the other, as viewer behavior is mainly driven by content, not provider loyalty. This finding indicates that customer retention may live or die based on where they find their next favorite show. (Ask Netflix about this challenge!)  And when the market is increasingly expanding with offerings that barely differentiate from each other, it is hardly surprising that consumers become frustrated with the oversaturation.

Another key driver for retention is having a large library, according to 76% of subscribers. Fifty-five percent of users desire original shows and movies.

According to Reelgood, although Amazon’s catalog is the largest, with 2,161 TV shows and 14,670 movies, it has the least number of exclusives out of the major streaming services, with just 38%. Netflix, on the other hand, is in second place, with 83% of its catalog being exclusive to the platform. Disney+ has the most exclusive content, as 89% of its content can’t be streamed elsewhere.

Disney+ has its established reputation of Marvel, Pixar, Star Wars, National Geographic and Disney properties, while other major streaming services such as Apple TV+, Hulu and Amazon Prime Video aren’t yet riddled with franchises or superhero-sized universes.

Subscribers also want more than just a single show to keep them tuning in. IP universes are intellectual property that can easily lead to sequels, prequels and spin-offs. Paramount’s Sheridan universe, for instance, is releasing two other spin-offs of “Yellowstone” called “6666” and “1932.” Fandom notes that “Yellowstone” was among its most popular communities.

Consumers are no longer just watching their favorite shows and moving on to the next. In a world of binge-watching and social media, casual fan behavior has evolved into super-fan behavior. Forty-six percent of dedicated fans look for community and culture around their entertainment interests, and 60% dive into online fictional universes.

There are tons of communities online dedicated to fictional universes. In particular, Fandom users placed “Star Wars,” Disney, “Harry Potter” and Marvel in the top four and considered them as franchises that “foster always-on fan exploration outside of releases,” per the report. 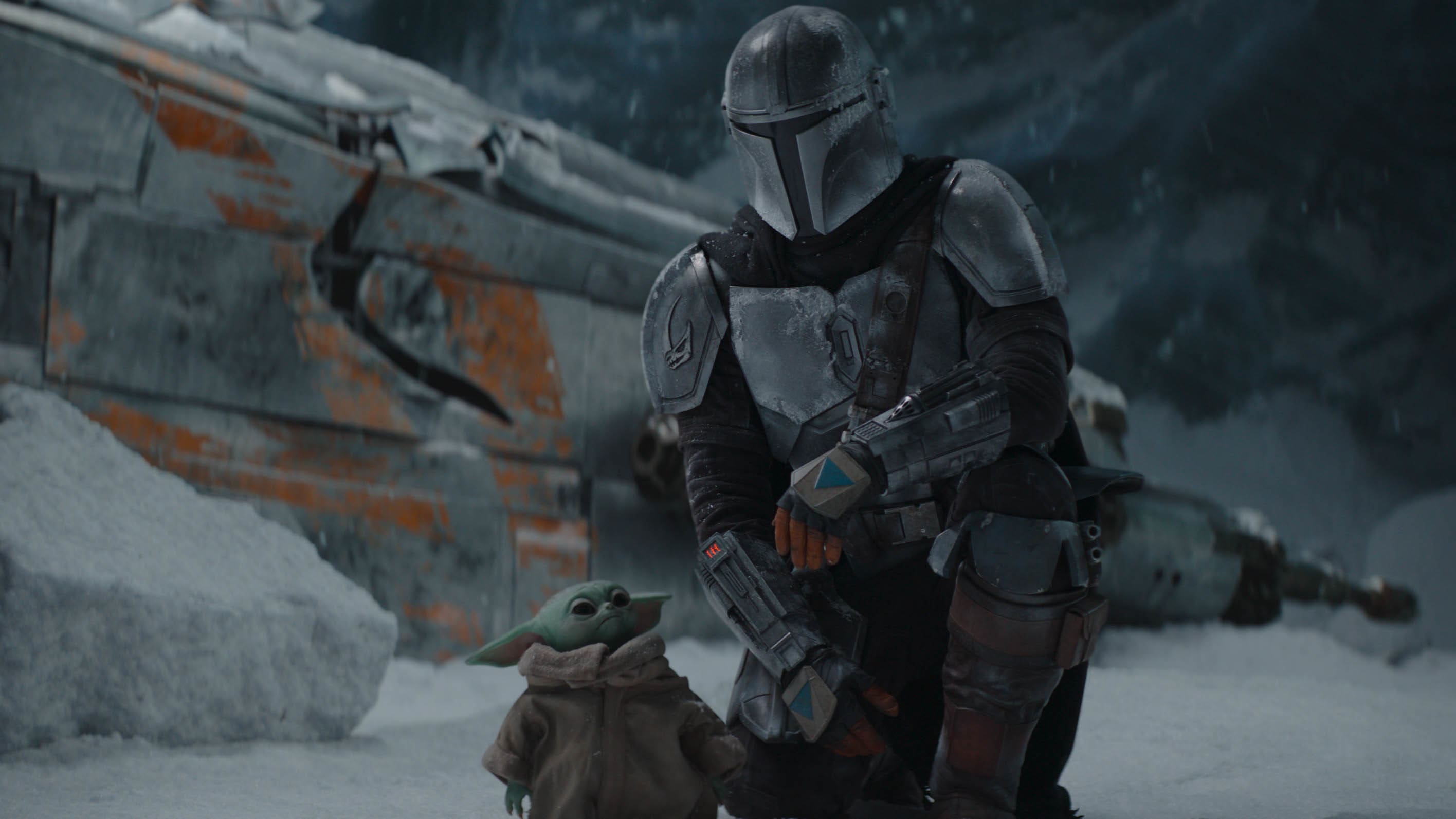 The majority of Disney’s most popular originals have come from the Marvel and “Star Wars” universes, with shows like “The Mandalorian,” “The Book of Boba Fett,” “Loki,” “WandaVision,” “The Falcon and the Winter Soldier” and “Hawkeye.” The success of “The Mandalorian,” mainly fueled by the cuteness of Grogu, became one of the most in-demand series in the world. On December 1, 2021, Parrot Analytics stated that “The Mandalorian” was 31.9 times more in-demand than the average title on a global basis.

Fandom’s user data shows that Disney+ has a +30% higher value than an average video streaming service. Disney’s huge umbrella of universes and characters has resulted in a fanfiction community unlike any other. Disney adults could single-handedly take over the internet. OK, not actually. But it is amusing to think about all those Mickey hats.

In addition, Disney’s fan fiction community grew +45% during the “Encanto” release, with the Encanto FanFiction page ranking as the No. 1 trending page during the week of its streaming release. The soundtrack, in particular, was a hit everywhere, especially on TikTok, and if you didn’t have “We Don’t Talk About Bruno” stuck in your head for a week, well then, you’re one of the lucky ones. The popular song, written and composed by Lin-Manuel Miranda, became the first Disney song to top the U.K. Singles Chart. It is also Billboard’s highest-charting Disney song, peaking at No. 2 on the Billboard Hot 100.

Amazon is also focused on IP with universe potential. The company has heavily invested in “The Lord of the Rings” and its ownership of the “James Bond” franchise through its $8.5 billion MGM acquisition.

It is easier for competitors to commission ‘something similar‘ to a single film or a TV Show than it is to replicate the depth of an IP universe. For these reasons, we believe IP universes will continue to play an increasing role.

Streaming services have the opportunity to reduce churn and potentially “win” the streaming wars by driving loyalty and creating a full fan experience with unique content and franchises. Thus, streaming services need to increase the titles that lend themselves to additional storytelling, rather than independent stories which only work as a one-off movies or series.