Zenly has always felt like the small social app that could become the next big thing. But it turns out Zenly is quietly becoming a social giant without anyone paying much attention — at least until now.

Originally designed in Paris, the app was acquired by Snap back in 2017. But that acquisition was just the beginning of Zenly’s insane growth story. According to the company’s internal data, the app has now reached 35 million monthly active users.

And today, the Zenly team is releasing its biggest redesign ever. As the update is rolling out in the App Store and Play Store, Zenly co-founder and CEO Antoine Martin is using this milestone to leave the company in just a few weeks.

Before I unpack all this, let’s look back at Zenly’s original vision. I first covered Zenly back in 2016. When you opened the app, you were presented with a map that showed your location and your friends’ locations.

“This isn’t another messaging app. This isn’t a social network. This isn’t a utility. It’s something that sits between all of these areas. And I keep opening the app,” I wrote at the time.

That vision hasn’t changed much. Zenly still wants to make the definitive social maps app. It’s an unconventional bet that has been years in the making. And the all-new Zenly could bring a new wave of users.

When you look at metrics, Zenly has been doing better than ever. In March 2022, according to data.ai (formerly App Annie), Zenly was the tenth most-downloaded social app globally. There are still nine apps that are in front of Zenly. But popular social apps like Discord and Twitter aren’t growing as rapidly as Zenly.

There’s a reason Zenly is doing so well right now. “When lockdown rules are lifted, when people go out again, they need Zenly,” Antoine Martin told me.

“It is still a product that is very personal, very contextual and very social.” Antoine Martin

But the company doesn’t want to stand still. I’ve been using the updated app for a week. The redesign is disorienting at first but a promising foundation for the future. It doesn’t look like Zenly, as the design language is completely different. There are some new features, while some existing features have been refined.

The old Zenly featured a lot of rainbow colors, animated emojis and playful design elements. It was both polished and fun, but it also felt like looking at the candy aisle in the super market.

Here’s what Zenly looked like when Snap acquired it back in 2017: 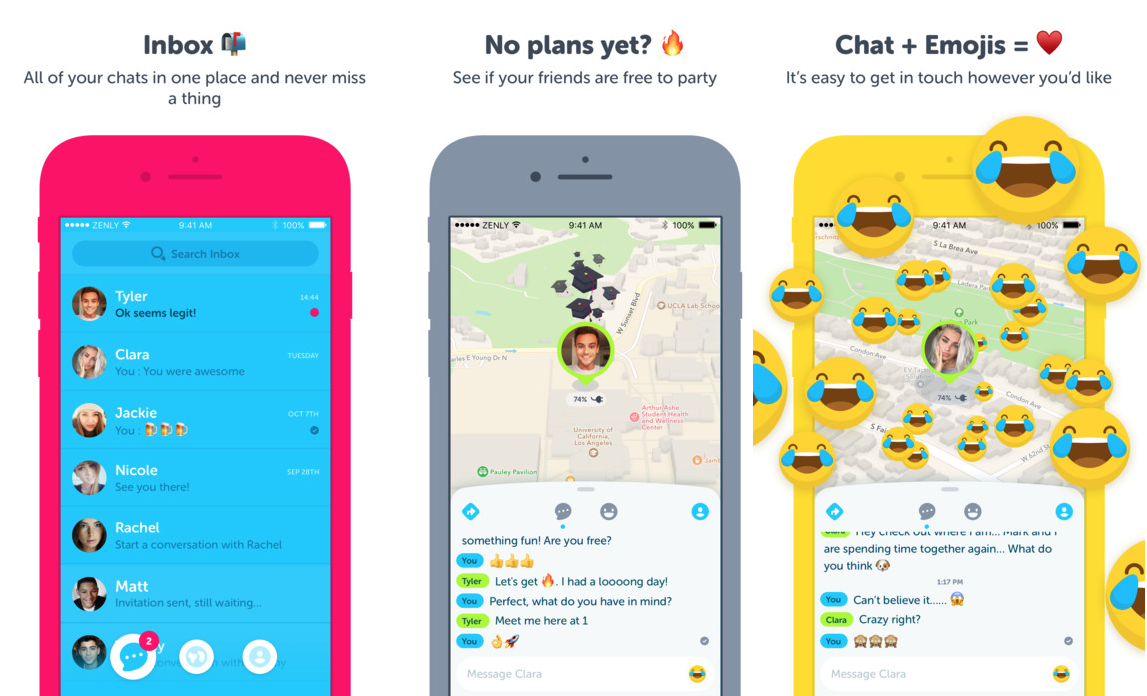 When you open the redesigned Zenly app, it feels a lot more serious. Profile screens and conversations now feature a black background. The main buttons at the bottom of the screen look like neon signs in a trendy restaurant.

With this new look and feel, Zenly wants to appeal to a wider user base. “What is appealing to college students worldwide today?” Antoine Martin summed up.

Instead of bold and rounded fonts, Zenly now relies on thin, elegant fonts. You’ll also instantly notice the permanent overlay on the map in various tints of yellow and orange. Like in strategy video games, it displays your footprints — it shows where you’ve been and where you haven’t been yet.

Here it is once again: 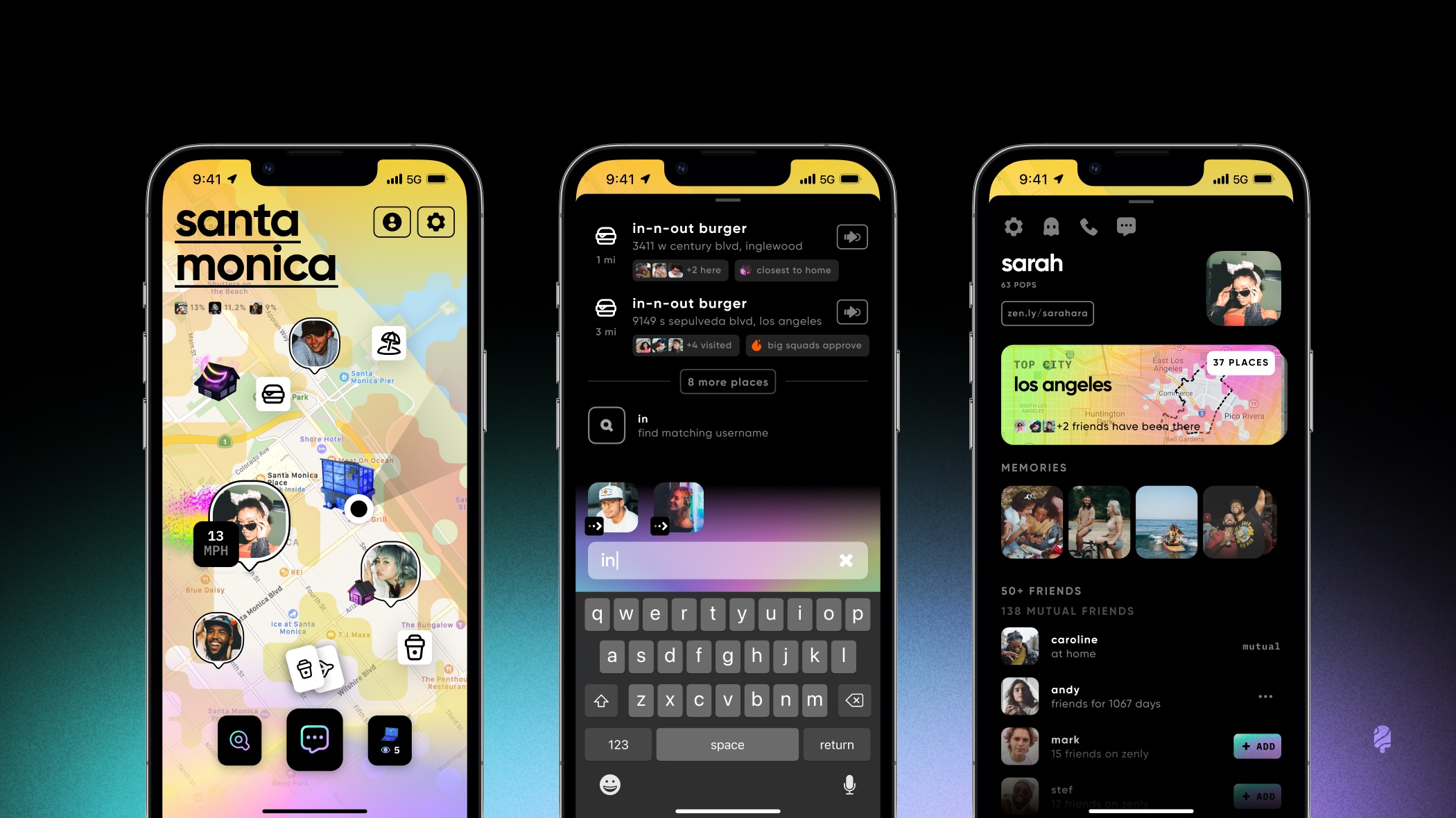 “Since the end of last year, we’ve been working on a global redesign of the entire app. It’s the biggest redesign we’ve ever done with multiple goals in mind. First, we are transforming Zenly into a maps app,” Martin said.

In the bottom-right corner, the button lets you either recenter the map or view recent highlights. This way, you can see where you’ve been over the last few days, share a highlight with friends and more.

“It is still a product that is very personal, very contextual and very social,” Martin said.

And finally, in the bottom-left corner, there’s a magnifying glass icon. That button alone hides a lot of potential.

“The big addition is places. We think we can build something better than anyone else,” Martin said. “Zenly has this unique ability to permanently run in the background. We remove the friction involved with checkins.”

“Places and movements are the best ways to make a map more personal,” he added.

On the search screen, you can look up a friend to see what they’re up to. When you tap on a profile, you see where they are, how long they’ve been here and who they are with. You can also see recent highlights, start a conversation and tap the “What’s Up” button.

That feature has been around for a while and has become quite popular. It sends a request to a friend, asking them to record and share what’s happening right now.

From the search screen, you can now also search for places, such as bars and restaurants. The search experience by itself is pretty great as the list refreshes in a fraction of a second with every new keystroke.

Each place card has basic information, such as the address and phone number. But Zenly also adds contextual information to give you hints about this specific place. For instance, you can see if it’s a convenient place for a big crew, if best friends tend to hang out there or if there are a lot of loyal visitors.

With today’s update, Zenly wants to passively build a place graph. Users shouldn’t have to open up the app and check in when they go to their favorite bar. Instead, the company wants to learn from your habits and highlight that information to you and your friends.

On each profile page, there’s a new section called “My world”. You can tap on it to see someone’s top city and top place. You can also see some recent places to get a better sense of their lifestyle.

But you can also use that feature to navigate around the map and look at places. It’s a nice way to discover new places or revisit old favorites.

“My world” is locked by default due to privacy concerns. After installing the update, users can choose to enable the feature in the profile, which means that you’ll share some information publicly. For instance, each place features a leaderboard with people who often go there.

Interestingly, Zenly is creating a global rollout event around this feature. When you choose to participate in “My world”, your map isn’t unlocked instantly, as Zenly wants to prepopulate the map with some of your favorite places.

Instead, people who enable the feature today will get a countdown. Three days later, you’ll be able to browse your world and let other people browse your world. The feature is a bit frustrating right now as there aren’t a lot of users on the beta version. I can’t wait to see data from the company’s millions of users.

When I installed the beta version of Zenly on my phone, I had to type “100 million” to unlock it. At Zenly, everything has a meaning. And that figure is the company’s milestone for monthly active users.

Zenly was a radically different app when Snap acquired it. The company only had 120,000 daily active users. “Zenly is now the biggest European social app ever,” Martin said.

“We joined Snap five years ago and we started working on Zenly 11 years ago.” Antoine Martin

And yet, if you live in the U.S., chances are you haven’t necessarily heard about Zenly. “Today in the U.S., we are really small but we have never tried to grow there since we joined Snap,” Martin said.

The app is particularly popular in Japan, Southeast Asia and Eastern Europe. There are also a lot of people signing up in Brazil and India. It’s clear that there’s still a lot of untapped potential. But that won’t be Antoine Martin’s job.

“We joined Snap five years ago and we started working on Zenly 11 years ago. I want to move on. And I haven’t had the opportunity to take a long paternity leave,” Martin said.

He didn’t tell me what he plans to do next. First, he’ll take a few months off. He may start a new company after that.

Going forward, Snap CEO Evan Spiegel is taking over at the helm of Zenly (in addition to the rest of Snap). It could hint at synergies between the Zenly and Snap teams as the Zenly team has remained independent since the acquisition.

“I want to thank Antoine for his leadership of Zenly over the years, and for his friendship. I remain inspired by his vision and I wish him all the best in the future,” Spiegel said in a statement. “We will continue to support Zenly and ensure its success, and I am confident that we will make Antoine proud with our stewardship of Zenly’s product and vision.”

During my meeting with Antoine Martin, he kept saying that Zenly has come full circle — “la boucle est bouclée” as he would say in French. I asked him why he kept using that phrase.

“We have come full circle because we have reached the original vision,” he said.