Twitter has a novel idea as to how to win back developer trust: It’s going to allow them to build on the platform itself, then promote their tools and services directly to users on Twitter at key moments.

The company today is launching an experiment that may be one of the more significant efforts in recent years — beyond the launch of the rebuilt Twitter API, of course — aimed at demonstrating its intent to collaborate with developers and be more responsive to their needs. With the new test, Twitter says it will promote select developers’ apps directly on its platform at the moment they may be useful to the end user.

The experiment will start off small by highlighting apps from Twitter’s recently launched “Twitter Toolbox” collection of ready-made services, specifically in the area of developer-built safety tools, including Block Party, Bodyguard and Moderate. The beta test will only display to select users.

When Twitter users block or mute someone using Twitter’s built-in tools via the web app, they’ll see a new, non-intrusive prompt that suggests various third-party services that are capable of providing more advanced levels of safety and protection.

Currently, the Toolbox is an online hub featuring ready-to-use, self-serve apps and services built by Twitter’s developer community and aimed at the public. In addition to the trio of safety tools, the Toolbox today includes scheduling apps Chirr App and Buffer; the Thread Reader app; and measurement tools ilo, Blackmagic.so, Direcon Inc., Followerwonk and Tweepsmap.

Put the NEW Twitter Toolbox to work for you. These ready-to-use tools are low-cost and built by our developer community to help you get even more out of Twitter.

Twitter says the idea to feature the Toolbox apps on its platform came from its discussions with the developer community. Developers told the company they wanted to improve users’ experience on Twitter, and, more critically, they wanted distribution so people were aware of their product.

“This is the first step in us working with developers to actually enable those needs,” explains Amir Shevat, Twitter’s head of Product for its developer platform, who came to the company via its 2021 Reshuffle acquisition after filling similar roles at Twitch, Slack, Google and Microsoft.

“[Developers] want users and we want to provide them with the right users at the right time — giving value both to Twitter users, who are at the moment needing those developer innovations, and giving distribution to those developers,” he says. 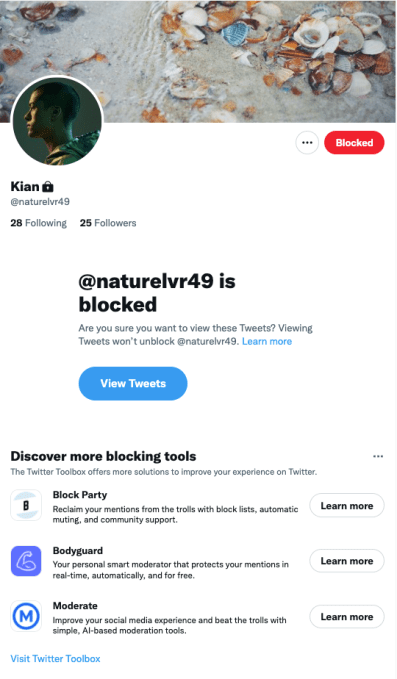 By only showing the prompts when the user intent is the strongest — when the user is already blocking or muting an account, in this case — Twitter expects users will show an increased willingness to interact with the developers’ apps. For a developer like Block Party, which currently gains users via word-of-mouth recommendations, the ability to acquire users on Twitter itself could be highly impactful for its business.

“We’re very enthused about the opportunity to get in front of users who are really going to benefit from what we’re doing,” says Block Party founder and CEO Tracy Chou. “This way, we are much more directly getting in front of the people who want this kind of tooling.”

Bodyguard’s founder and CEO, Charles Cohen, is already expecting his business to grow substantially with the result of the new test.

“We currently estimate that 25% of users installing Bodyguard come from the Twitter Toolbox website, and we expect that figure to rise to 50% within the next few days,” he says. “We’re also excited about this new experiment that will bring Bodyguard to Twitter users who need an immediate, free, real-time, customizable and high-quality protection against toxic content directed at them on their social media.”

Although Twitter has been operating in a more open capacity with its developer community for several years, it still has a lot of history to overcome to fully reset its developer relations. And it will be no small effort to repair its reputation.

In earlier years, Twitter’s attitude toward developers was disorganized and constantly in flux. It hosted its first developer conference, Chirp, in 2010, setting the expectation that it would continue to engage directly with those building with its API and developer tools for years to come. The following year, the event was canceled and it didn’t return.

In 2012, Twitter pulled the rug from under the feet of developers who had been building third-party Twitter clients, and a few years later, it shafted its own partners who had agreements to resell Twitter’s firehose data — the unfiltered, full stream of tweets and their metadata — after its 2014 acquisition of the partners’ competitor Gnip.

And, as some have suggested, Twitter was not always honest about the reasons behind its API changes. A recent Twitter thread by early Twitter employee Evan Henshaw-Plath (@rabble) explains that Twitter’s decision to limit third-party clients was actually due to a competitive threat from UberMedia, which had been buying up clients with the goal of shifting users over to its own microblogging service.

Lamented Henshaw-Plath, “Twitter thought the open ecosystem was going to be captured, so they shut down the ecosystem to save the company. I wish they’d partnered with app developers, [been] honest about the attack on the company …”

Twitter is important, but it's always been vulnerable as a company. When Twitter does something which upsets the community of users, it is often due to this vulnerability. Let me tell you a little known story about an earlier time a billionaire tried a hostile takeover of twitter

Today, Twitter wants to collaborate with developers and build the tools they need to be successful, he explains.

With the rebuilt API, for example, the company focused on including features that were missing from earlier versions — like conversation threading, poll results, pinned tweets, spam filtering, stream filtering and more. It also opened up its platform, reduced the onboarding burden, added more free access and removed some of its earlier policy constraints (including those impacting third-party apps).

By November 2021, the company said 90% of all existing apps built on the API v1.1 could be fully supported on v2, while also accessing its key new features.

“Twitter’s API v2 has shown a real listening to the needs and feedback of developers and all of this is going in the right direction,” says Cohen.

And Chou agrees. ” … It does seem like there has been a change from the early more chaotic days, where it seems like the folks at Twitter now really see the value of having this developer ecosystem and really want to invest in it — because they see that it’s a good thing for their users to have more of these options, around things like moderation and safety.”

But collaboration and communication are only part of serving the developer community. Helping apps get discovered and generate revenue are also critical factors.

“As we have more surfaces on Twitter, we want to create better ways to discover [developers’ apps],” Shevat says. “Developers, in order to be successful on the platform, need engagement surfaces … they need to get discovered, which is what we’re trying to do with the next few experiments,” he adds. “And they need the ability to be successful monetarily with their innovation.”

This strategy is not just good for the developers, it’s also good for end users who benefit from access to these third-party tools and services, he notes.

“This is basically the underpinning assumption behind the things that we’re launching,” says Shevat.

Another factor driving this strategy is that Twitter is coming to understand that it can’t build everything that its users need, even with its increased pace of product development.

Meanwhile, its decentralization efforts through the BlueSky project will only drive more demand for developer-led innovations. To highlight a current example, there’s a growing demand for algorithm choice and user-set levels of content filtering or moderation. Elon Musk’s bid for Twitter is, in part, about wanting a different set of moderation rules.

Apps like Block Party, which filters out unwanted mentions and blocks trolls, could ultimately help with some of these issues.

“One way to think about Block Party is that it is a different algorithm for what you’re going to look at, in terms of notifications and when people tag you,” explains Chou.

“The default algorithm is that anytime somebody tags you, you see a mention. The new algorithm, with something like Block Party installed — even if users aren’t thinking of it as like I’m choosing my own algorithm — is a different experience. Just because somebody attacked me doesn’t mean that I’m necessarily going to have to see it immediately,” she says. “I can choose not to see it. So now there’s a different algorithm controlling the experience of mentions.”

While Block Party’s focus is on filtering mentions, there are other areas throughout Twitter’s product where users might want to customize their experience more, rather than going with the platform default.

One such area involves creators. Shevat points out that the new API added endpoints for Twitter’s Super Follow creator subscriptions product, which allows users to subscribe to favorite accounts through in-app purchases to receive exclusive content. With the API, a developer could make a Super Follows app that serves different sets of content to followers versus subscribers. Or it could filter the end-user experience to focus on the paid content from the user’s Super Follow subscriptions.

Such an app could be promoted within Twitter when the user engages with a Super Follow creator or subscribes for the first time. He also imagines how developers could build within Twitter Spaces — imagine Wordle in Spaces, he suggests — or even promote their apps on the Twitter Timeline. Perhaps if someone posts a link to a song, you could play it with your favorite streaming app.

It’s easy to also imagine the other Twitter Toolbox apps being similarly promoted in various places on Twitter’s platform — like when users look for a way to batch-post tweets or check their analytics, for instance.

“I think of Twitter right now as the old Nokia phone … it was a good phone. But the only app on it was Snake, if you remember,” says Shevat. I see the future of Twitter as an iPhone, where the value that you get is actually through developer innovation.”

Shevat notes there’s now a dedicated team focused on solving the app discovery problem specifically, with solutions like Toolbox and this latest Twitter test. Further down the road, the apps and services could be more deeply integrated with the Twitter platform, as Twitter in December added support for OAuth 2.0, which he describes as a first step into a much tighter and seamless integration in the future between Twitter and the apps it features.

“I can definitely see that as one of the possibilities for our future,” says Shevat, when asked about this option. “From my experience, as a pure product person, I want to experiment to see where’s the best way because … the world is full of successful marketplaces, but it’s also full of graveyards of old marketplaces that nobody wants to go to,” he continues.

“So I need to make sure that users find value — maybe I can just surface it in the product instead of a separate marketplace. Maybe I can create a section within the product that surfaces developer innovation.”

“But we’re definitely going to solve the problem of discovery,” he says.