In mid-2020, short-term rental startup Lyric Hospitality shuttered most of its locations in what was widely viewed as another pandemic casualty.

But the San Francisco company — which was out to help folks who struggled to decide between staying in a hotel or an Airbnb — wasn’t ready to go down without a fight. It is now spinning out the software side of its business, including a pricing tool for accommodation that it had built, and that spinout has raised $16 million in funding.

Highgate Ventures and NEA co-led the round for Wheelhouse, which also included participation from Fifth Wall, Certares, RXR, SignalFire and PAR Capital, among others.

Much of Lyric’s core team regrouped and decided to focus on building out what is today Wheelhouse, as the remote work environment precipitated by the COVID-19 pandemic led to more people seeking longer-term rentals.

And a number of the company’s investors stuck with that team in the process.

In an interview with TechCrunch, Wheelhouse Founder and CEO Andrew Kitchell shared details of the company’s pivot, its new funding and plans for the future.

Before the pandemic, Lyric had developed software called Wheelhouse Pro as part of its larger hospitality tech stack. In addition, Lyric also designed & managed inventory, including the property that it says became the #1 rated hotel in New York City..

“Sometimes I described it like, ‘Maybe the worst place to be in a pandemic like this was a venture-backed hospitality company focused on corporate travelers with urban exposure,’” he told TechCrunch. “We went from going into March of 2020 with what actually looked like it was going to be record revenue for us. And then literally from March 1st on we just started having people cancel and occupancy dropped to 8-10% globally.”

The company’s execs didn’t believe they were in a cash position to survive the pandemic and, rather than drag things out, reduced headcount from 150 to 15 in mid-2020. Co-founder and president Joe Fraiman had left the company in May to pursue other opportunities. Those who remained focused their energies on building out Lyric’s underlying technology.

“When Covid hit, we were forced to shut down our operating company, and we shifted our focus to Wheelhouse,” Kitchell told TechCrunch. “We were able to take software we had built for Lyric’s portfolio to make Wheelhouse better and more professional-grade.”

After about 10 months of “building,” in February of 2021, the team launched Wheelhouse Pro, its software designed for large portfolios. With the new fundraise, the company is “formally spinning out this software from Lyric,” he added.

“COVID ended up causing some really unexpected travel patterns and shifts in how people both stayed and traveled,” Kitchell said. “So when COVID hit, we basically made the decision to say, ‘hey, our operations company cannot survive as an OpCo but we’ve actually built some really interesting technology that we think the next generation of operators and hospitality companies will want to leverage.’ ”

With that it expanded from being a B2C company to also a B2B one.

Kitchell describes Wheelhouse as a “fintech platform for the $500 billion-plus flex rental space” that includes pricing and financing. Think professional Airbnbs and corporate rentals. The company says its technology has been deployed for over two years, but only recently separated from Lyric to stand alone.

“What we had built at Lyric was basically automated revenue management,” Kitchell explains. “We would take over a property or a home and dynamically price it to try to help the owner earn more revenue. We built an entire suite of tools that our team has been leveraging to do revenue management across different properties.”

So what benefit can Wheelhouse bring to short and mid-length stay providers? Kitchell claims that the providers “may make 20% more money from their rental properties and can manage “huge, spread portfolios” when using the company’s technology. In fact, some of Lyric’s former competitors are now Wheelhouse users, including venture-backed companies such as Mint House, Blackswan, Jurny and Sextant Stays. 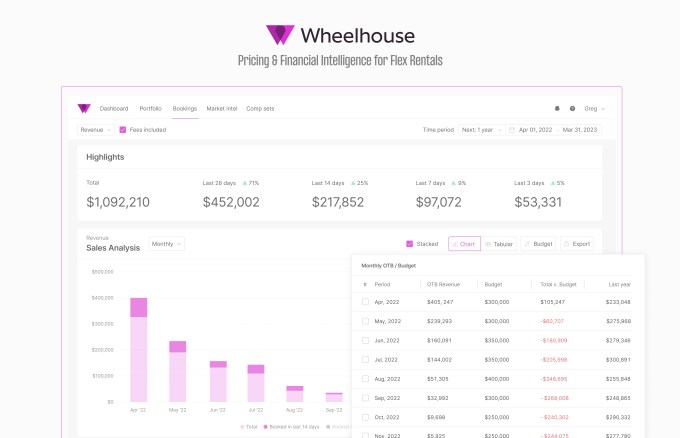 “We still have individual hosts and entrepreneurs with a few listings who build their business on top of our technology and we have people with 1,000-plus listings,” Kitchell said. “We work with multifamily companies who are looking at both short-term stays as part of their portfolio, and also a pretty interesting emerging category of mid-length, which can be anywhere from a 30-day to nine-month stay.”

“People are embracing flexible living,” he added. And working with a number of companies focused on mid-length stays has “greatly expanded” its total addressable market (TAM), according to Kitchell.

Wheelhouse says it experienced 100% overall growth over the past nine months and 45% growth in the first quarter. Its B2B business, in particular, saw 500% to 600% growth over the past nine months and is now by far the fastest growing, and majority, of its business. Looking ahead, the company plans to roll out “Wheelhouse Everywhere,” which it describes as a pricing engine methodology — from 42 countries to worldwide.

The company plans to use its capital to “finalize” the core technology it inherited from Lyric, price mid-length stays and do some underwriting.

“As larger teams continue to adopt Wheelhouse Pro, we are focused on adding features that make it easier for teams to adjust, track & communicate about revenue strategies, on our platform. We also always invest in data science research to improve ML pricing engine,” Kitchell told TechCrunch. “Underwriting for short-term rentals is challenging and requires our data and engine.”

NEA General Partner Rick Yang first invested in Lyric in mid-2017 and has remained in close contact with the company throughout its evolution and current spinout.

Kitchell recalls that Yang was supportive from the beginning of the pandemic and immediately got on the phone with Lyric’s executive team to help them strategize when its occupancy plunged.

“It’s pretty interesting to see how quickly this company really understood the severity of the situation and was able to navigate out of that to find ourselves where we are today, which is such an interesting and much stronger position,” Yang told TechCrunch. “It’s a small team, but it’s doing millions of ARR, and you just don’t see that very often.”

Another venture-backed company that is focused on the corporate flexible rental space is Zeus Living, which raised $55 million last year. It was initially focused on just business travelers but is now also offering flexible rentals to the general population by partnering with homeowners. Airbnb invested in that startup as well.