Though the creator economy is rapidly growing and changing, there isn’t much existing research about the space, making it difficult for stakeholders to understand what’s going on behind the ring light. So Linktree, the link-in-bio unicorn, is releasing a report today with findings from a survey of 9,500 creators, which helps illuminate some overarching trends about how creators are trying to make it on social media.

It’s easier than ever to become a creator — per Linktree’s numbers, over 200 million people could be classified as a creator, which the company defines as anyone who uses their influence and creativity to monetize their audience, regardless of which platforms they use. But the study found that 39% of creators — regardless of their income level — reported they consistently must take measures to reduce stress; in fact, 13% of full-time creators say they’re extremely stressed. 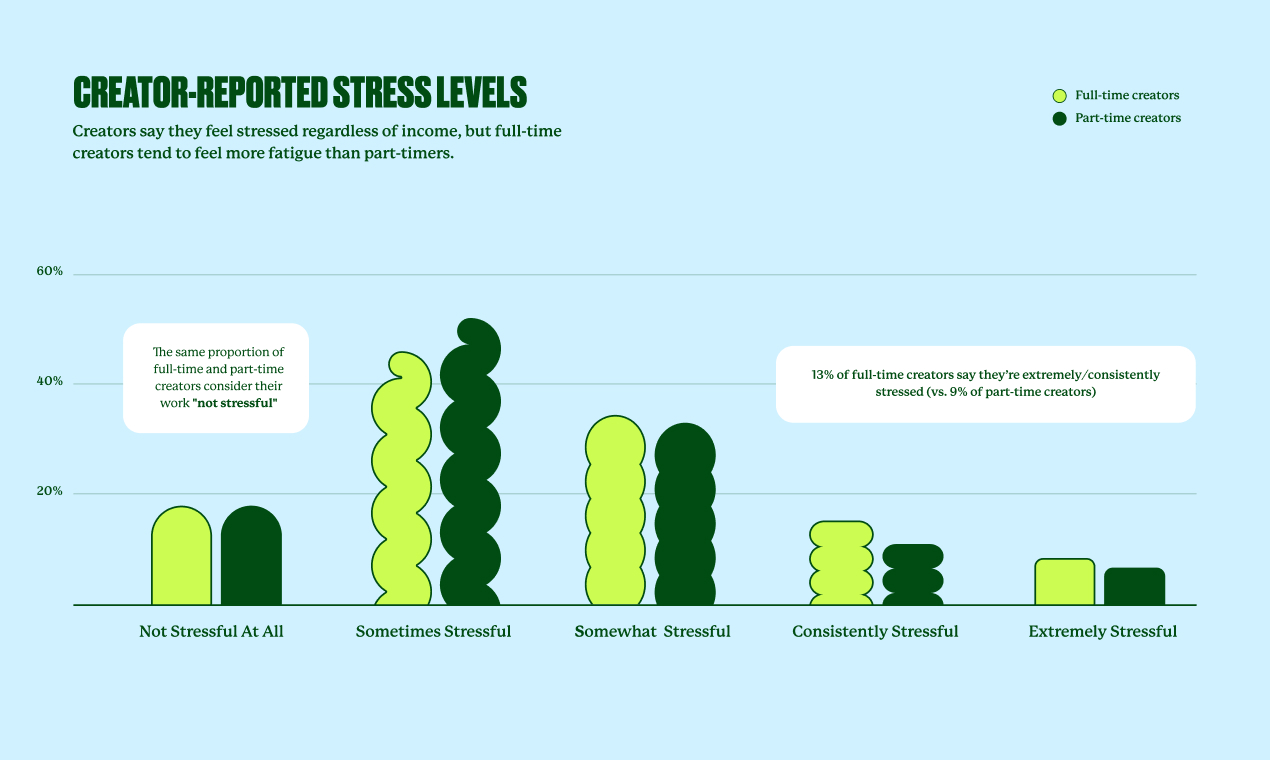 This tension makes sense. Creators aren’t just posing in cute clothes on Instagram and doing silly TikTok dances. They’re running small businesses, which often require them to be “on” at all hours of the day, dealing with a constant barrage of Instagram comments, client emails and likely overdue invoices, since anyone who’s ever done any freelance work knows that being paid on time is a fluke. It’s not just posting videos — it’s writing scripts, filming, editing, marketing, accounting and anything else that a business requires.

But one of the more shocking revelations from the report is that creators are leaving money on the table, Linktree says. Only 12% of full-time creators are making more than $50,000 per year, while 46% of full-time creators make less than $1,000 annually (… which begs the question, who are these people who are making $1,000 per year working full-time? Are there more hobbyist, retiree influencers than we think?). Linktree also found that there’s not a direct correlation between time spent on content creation and annual income. Thirty-two percent of creators making up to $10,000 per year spent more than 10 hours a week on content creation, while 52% of creators making between $50,000 and $100,000 dedicated less than 10 hours a week to making new content.

Linktree estimates that 66% of creators see their online pursuits as a side hustle, while 36% of creators have only been making content for a year or less. Of those creators, whom Linktree classifies as “beginners,” only 6% have earned over $10,000. Thirty-five percent have monetized, but haven’t earned enough to make a “livable income,” while 59% haven’t monetized yet. 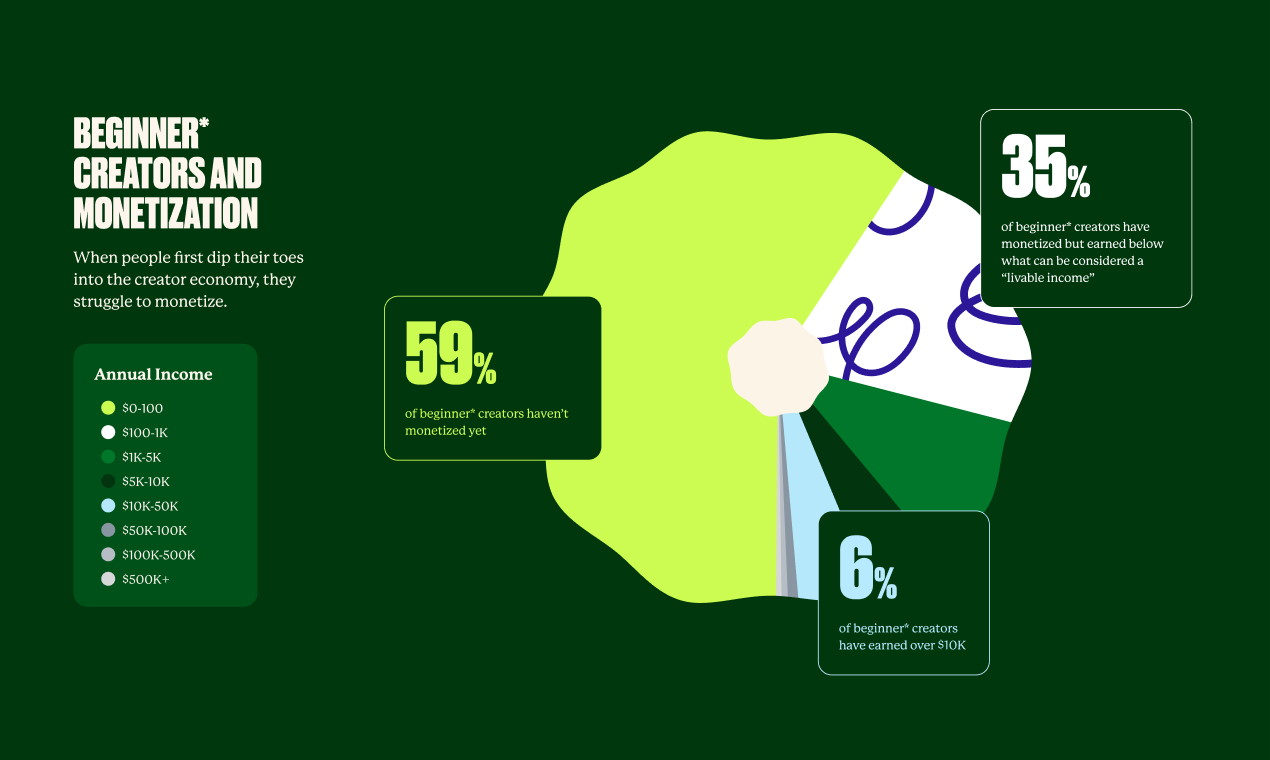 A past creator economy report from the Influencer Marketing Hub and Neoreach found that brand deals were the primary source of income for creators. But Linktree says that’s not true. According to Linktree’s data, 70% of creators earn less than 10% of their total income from brand partnership, which indicates that brand deals are neither reliable nor consistent sources of revenue. Moreover, 12% of creators are making less than $100 per brand collaboration (please, y’all, you’re worth more than that!).

Perhaps this means that creators are profiting from things like YouTube ad revenue, Patreon memberships, merch sales, creator funds, etc. Plus, it’s worth remembering that this isn’t a survey of one specific brand of influencer; it’s a survey of 9,500 Linktree users across the creator space. So while a recipe Instagrammer might partner with their favorite gluten-free noodle company, a YouTuber might be sticking to that good, good AdSense money.

“Sixty-eight percent of part-time creators make less than 1K,” said Eric Jacks, chief strategy officer of Collab, Inc., who partnered with Linktree on this research. “This vital research underscores how difficult it can be to be a creator, and just how important it is for creators to find partners, platforms and services that streamline monetization opportunities.

Based on these findings, Linktree recommends that creators find a specific niche, citing that 37% of niche creators earned brand collaborations, compared to 26% more general creators. After all, there’s more competition in “cooking” than “cooking hacks for vegans who are unfortunately allergic to soy and thus can’t eat tofu or tempeh or frozen chick’n nuggets.”

Finally, the study finds that having a highly engaged, smaller audience helps creators monetize more effectively than a large, minimally engaged one. This makes sense, since many brands require potential influencer partners to share information about audience engagement rates, not just their follower counts.

This new data helps us better understand the breadth of the creator economy and the struggles that its participants are facing. But of course, no creator guidance is one-size fits all — would you give the same advice to a VTuber and a TikTok prankster?

How much is ‘link in bio’ real estate worth? Linktree’s new valuation says $1.3 billion