Perhaps one of the strongest examples of software “eating the world,” as a prominent VC once put it, is the growth of the software-as-a-service (SaaS) industry. According to Statista, in 2021, the market for SaaS apps and services was worth roughly $145.5 billion — up from $120.7 billion in 2020. One source estimates that companies now spend 15% of their budgets on SaaS tools.

But as the SaaS model continues to gain prominence, particularly in the enterprise, businesses are facing challenges in managing their sprawling subscriptions. In a survey commissioned by Productiv (which admittedly has a horse in the race, given that it sells products to manage SaaS services), close to half of enterprise IT departments said they spent an inordinate amount of time provisioning and managing SaaS apps. Beyond becoming time sinks, SaaS apps can also pose a security threat. Eighty-five percent of companies responding to a 2021 Adaptive Shield report believe SaaS misconfiguration is a top threat vector for their organization.

Beamy is one of several startups aiming to tackle the SaaS management challenge with a platform that promises to simplify SaaS app installation, updating and maintenance. Beamy, which today announced that it raised $9 million in a funding round ($6 million in equity and $3 million in debt) led by the Aglaé Ventures and ISAI funds, claims its product can detect and control SaaS apps in a “decentralized” way, using algorithms that follow the lifecycle of each app and spotlight potential security and compliance risks.

“With SaaS apps now being everywhere, it’s time for large companies to act accordingly, but there is a considerable underestimation of the number of SaaS apps in large enterprises. SaaS spending is estimated to grow ninefold over the next decade, while 80% of business apps are set to be delivered by SaaS models by 2031,” founder and CEO Andréa Jacquemin told TechCrunch. “SaaS is not just an IT issue, it is above all an organizational issue that affects all C-suite figures.”

From the ground up

Andréa Jacquemin launched Paris, France-based Beamy in 2017 with Anna Naydenova and Edouard Dossot. It’s Jacquemin’s second venture after Local View, an advertising agency that specialized in “drive-to-store” digital marketing, or marketing aimed at attracting customers to a point of sale.

While building out Local View, Jacquemin observed that the company’s customers struggled to manage their many SaaS subscriptions. The germ of the idea for Beamy arose from a desire to build a management solution for these customers. 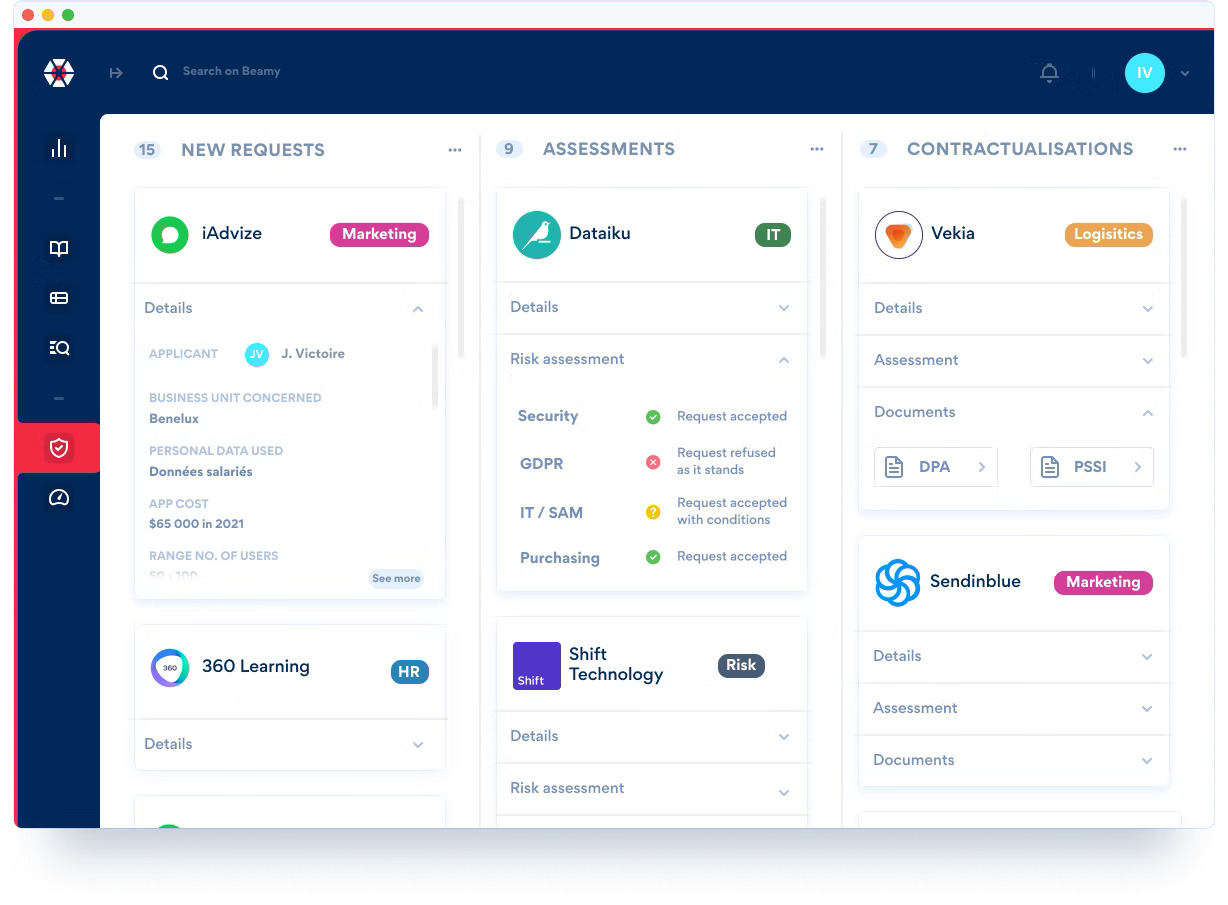 “The SaaS management platform market is one that is both booming and complex,” Jacquemin said. “SaaS is not just about IT, or technology. It’s about how businesses are transforming themselves on a daily basis to level up digitization. SaaS has become the vector of digitization for large companies because all of their business lines are using this type of software. We are convinced that the paradigm shift happening here will be the main story of the next decade.”

Beamy certainly isn’t the only product of its kind. Companies like Meta SaaS, AppOmni and the aforementioned Productiv also offer SaaS security and governance controls geared toward enterprises. Others, like Atmosec and Grip Security, focus specifically on the cybersecurity aspects of SaaS management.

But Jacquemin makes the case that — unlike many of its rivals, according to him — Beamy focuses on “large and traditional” companies in legacy markets. “In traditional, large enterprises, we have the advantage and a product that works better than our competitors, with customizable data models [and] specific governance workflows tailored to large companies,” he asserted. “[Our main competitors] address tech companies.”

Beamy’s platform discovers apps by analyzing customer data, including financial transactions and employee navigation and single sign-on logs. Algorithms, including a classifier trained on a database of over 100,000 companies, determine which data flows come from which SaaS apps and detect SaaS apps that aren’t in the knowledge base Beamy maintains. Beamy then assesses the risks associated with the SaaS stack according to criteria such as security breaches and GDPR compliance to generate a “criticality score” for each app.

Absent independent reviews of the platform, we’ll have to take Jacquemin at his word where it concerns the accuracy of Beamy’s SaaS app detection and risk scoring.

When asked about another sensitive topic — privacy — Jacquemin says that Beamy automatically purges detection data and refrains from conducting SaaS app detection via web browsers, which he claims can be less secure than other detection methods.

Beamy, which currently works with “several dozen customers” including LVMH, BNP Paribas, Engie and Orange, plans to ride the wave. Jacquemin says that the goal is to put the proceeds from the recent funding round toward product development, expanding to new geographies, and roughly doubling the size of its 40-person workforce by the end of the year.

“In our market, [recent events like] the pandemic has only strengthened the explosion of SaaS, which has helped raise awareness for Beamy, especially among CIOs,” Jacquemin said. “Managing the explosion of SaaS is urgent, but the real issue is deeper — the top- down vision of IT is over and the current … digitalization is just the tip of the iceberg when it comes to the … [trend] of IT decentralization by the business, for the business.”