TeamSnap, a web service for managing recreational and competitive sports teams and groups, announced the launch of its all-in-one multi-program management system for youth sports organizations. With the new system, clubs and leagues will be able to register players as well as take advantage of new scheduling and team management tools. The launch is set to go live on Tuesday, April 26, and the offering will include the TeamSnap mobile app.

Peter Frintzilas, CEO of TeamSnap said, “With this rollout, our platform that connects more than 25 million youth sports users and over 19,000 organizations can now seamlessly, securely, and efficiently meet every business management need of a sports organization, while also empowering them to spend more time doing what they love – and that is focusing on game time.”

TeamSnap was founded in 2009 and has come a long way over the past decade or so, now with more than 4 million monthly active users, and approaching 2 million daily active users. The app also caters to customers in 135 countries, with teams representing over 100 different sports, according to the company’s announcement.

Frintzilas spoke with TechCrunch about the new release as well as the benefits of a team sports app and the company’s overall goal.

“We provide easy-to-use tools for communication scheduling, payment collection, registration. [Youth sports] is a complicated and disorganized industry. And our goal is really to help organize some of that chaos,” he said, “by providing a management platform that brings together leagues, coaches, parents, players, fans all in one place and building out that community.”

TeamSnap has a convenient mobile experience for consumers, whether that be independent coaches, parents, families or even fans. Parents of multiple kids can probably count how many times they’ve gone to the wrong field, had the time of a game wrong or forgot it was their turn to bring the orange slices and water bottles. While these may seem like small issues, avoiding the disappointment of missing a game is important to a child.

In the same vein, TeamSnap aims to bring a valuable user experience for clubs and organizers as well.

“At the end of the day, our club elite customers are really small businesses, and so getting them the level of insights to their financials to cash flow reports across all their programs is essential to the success. This new club and league release includes all-new kind of in-depth financial reporting, tracking, allowing them to kind of manage the finances overall,” said the CEO.

Quick registration of multiple players is a major plus, since TeamSnap removes the need to retype the same information over and over. It even helps keep track of players who are family members. 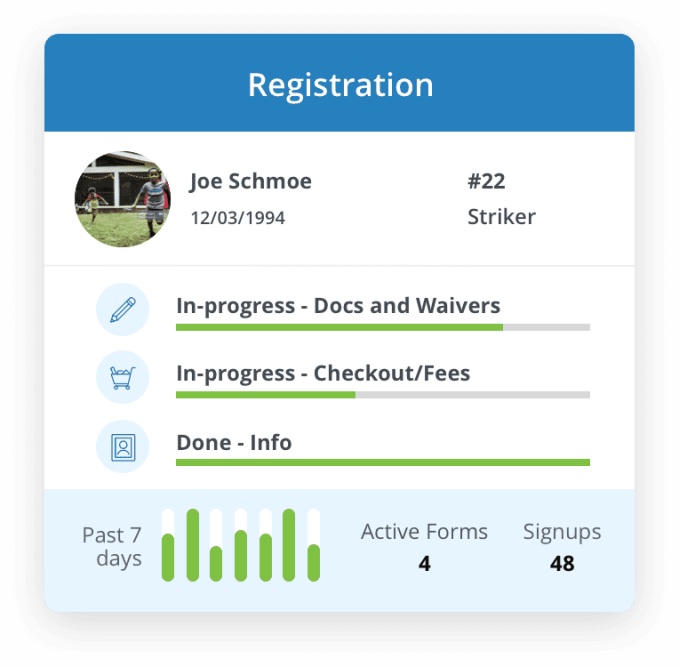 “With our new system, we’re really focused on allowing those organizers to support these types of setups, enabling their coordinators with the right level of access to tools, and most importantly, data, all in one place,” Frintzilas added.

One customer, in particular, the North Bay Minor Hockey Association, experienced terrible support via an anonymous technology provider. “Communication was poor, support was poor, and this was the last straw,” said Matt Duquette, the club’s secretary and treasurer, in a testimonial for TeamSnap. He added, “Before, we’d put registrations and tryouts on our website and hope people looked. We’d email coaches and ask them to email the team. We’d post on Facebook. It was a shot in the dark, hoping we’d reach everyone.”

Just by doing a brief search, there are a good amount of apps that offer communication and scheduling tools for coaches, such as Sports Illustrated Play, LeagueApps (which just raised $15 million), Teamer and StackSports, among others. While there could be sports teams organizing themselves through a Facebook group or maybe soon, via the new WhatsApp Communities feature, these are only used for communication purposes.

“Unfortunately, in the industry and sports tech as a whole, we’ve seen providers cut back on that live support for organizations and for coaches and we’ve done the opposite, and have moved well beyond the industry standard Monday-through-Friday support and put in full 12-hour support across all time zones, seven days a week. Our responsive live chat represents over 50% of our interactions,” said Frintzilas.

He also told TechCrunch that the company is looking to bring video into the user experience, whether that’s through livestreaming of games or the ability to create highlight reels. User experience is vital to an app’s success and as TeamSnap evolves, the value will hopefully continue to increase for customers.

It’s also important to touch base on the pandemic and how youth sports teams have declined over the past two years. COVID-19 shut down a lot of games and delayed seasons. TeamSnap ran a research study with The Aspen Institute and Utah State University to look at how the loss of sports impacted athletes and families.

More than half of parent respondents reported that their children’s mental health (52%) and physical fitness (53%) decreased during the pandemic. With TeamSnap’s new health check function and overall advocacy for improving youth sports, this will hopefully improve over time.