For 10 months in 2018, Ovalbek Turdakun was a prisoner in one of China’s notorious detention camps, where he was tortured, subject to horrific conditions and under constant surveillance.

In a makeshift courtroom inside the detention camp he was being held, Turdakun was not permitted to speak and was made to sign papers he was given no time to read. As a former law student, he knew that the court was not following a proper legal process, but was nevertheless told that the court’s decision would lead to “great things” for him and that he would study and live for free.

Turdakun is a Chinese passport holder and an ethnic Kyrgyz, one of several ethnic groups — including Kazakhs, Tajiks and Uyghurs — that have been charged with dubious if not invented charges and detained in vast detention camps across Xinjiang, a region in northwestern China where most of the ethnic groups live. Beijing calls them vocational and education centers and says they are for combating Islamic extremism. But Turdakun is a Christian, who researchers say have also been targeted and arbitrarily detained by the state.

United Nations watchdogs say China has incarcerated at least a million of its own citizens in detention camps in recent years, but the figure is believed to be higher. The Biden administration declared China’s treatment of Uyghurs and other Muslim minorities a “genocide,” though Beijing has long denied allegations of human rights abuses.

Turdakun is only able to tell this story after U.S. immigration authorities granted him and his family advanced parole, a temporary immigration status allowing them to enter the United States, after congressional lawmakers lobbied on their behalf. Turdakun and his wife, Zhyldyz Uraalieva, and their son arrived in Washington, D.C., on April 8.

“There is no freedom inside that place,” Turdakun said in an interview with TechCrunch, speaking through a translator, in Washington on Tuesday. Even after he was released under conditions similar to that of house arrest, Turdakun said he would be seen on facial recognition and harassed by police officers every time he left the house. 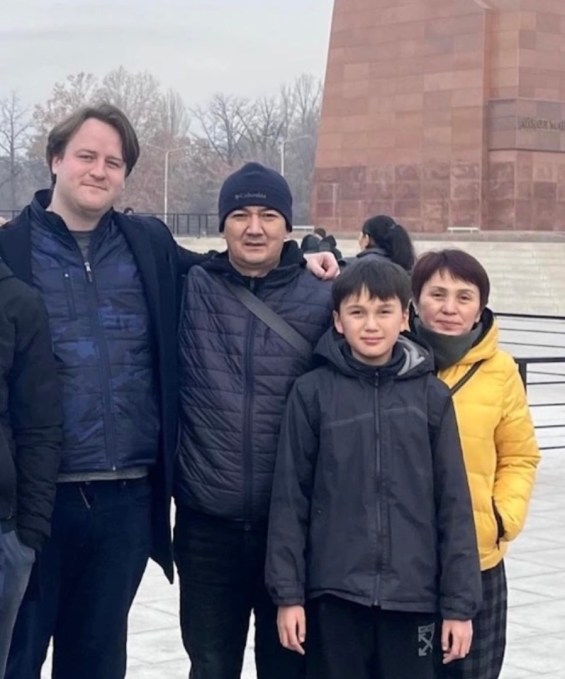 As a former prisoner, Turdakun is one of only a few people with a firsthand account of the inside of China’s detention camps, including rare knowledge of how the Chinese government uses technology, surveillance and facial recognition to oppress millions of Xinjiang residents, which U.S. lawmakers will use to investigate human rights abuses in China and the Chinese companies that supply surveillance technology to the camps.

A letter seen by TechCrunch that was sent by Rep. Chris Smith of New Jersey in support of Turdakun’s advance parole case said his knowledge will provide vital evidence regarding the “use of technology provided by Chinese companies such as Hikvision to facilitate gross violations of internationally recognized human rights by the Chinese government.”

Smith, whose office did not return a request for comment, is a vocal critic in Congress of China’s human rights record, including its use of surveillance technology for carrying out human rights violations. Sen. Marco Rubio, vice-chair of the Senate Intelligence Committee, also reportedly supported Turdakun’s immigration effort.

Hikvision is one of the world’s largest suppliers of video surveillance cameras, making about $10 billion in profit in 2020. A year earlier, it was one of several Chinese technology companies added to the U.S. government’s economic sanctions entity list, effectively barring the company from buying U.S. components without the government’s approval, citing its role in enabling human rights abuses in Xinjiang.

Chiefly, successive U.S. administrations have alleged that Beijing relies heavily on companies like Hikvision, but also Dahua, Huawei, SenseTime and others, to supply the surveillance technology it uses to monitor the Xinjiang population both across the region and also in its many detention camps.

Ahead of arriving in the United States, Turdakun described the conditions of his detention, brutal interrogations and forced medical procedures in a series of video interviews recorded by Conor Healy, government director at video surveillance news site IPVM. In December, Healy met Turdakun and his family in Kyrgyzstan where they had been for the past year, to help them obtain their immigration paperwork onward to the United States, amid fears that the Kyrgyz authorities could deport the family back to China, Healy told TechCrunch.

In one of the video interviews shared with TechCrunch, Healy showed Turdakun a photo of Hikvision’s logo, which the former prisoner immediately recognized, saying that it was the same logo on the cameras in the cells in the detention camp and littered throughout the city.

Speaking with TechCrunch on Tuesday, Turdakun described the cells where he would be held with two dozen other prisoners for months at a time and how the cameras, all branded with Hikvision logos, were “always on and watching,” he said. If the cameras saw anyone speak, a booming voice would tell them not to talk.

He described how the detainees would spend hours in silence, enforced by the cameras, and they would have little other human contact outside of the cells for extended periods; often the door would stay shut for long timespans and food would be pushed through a slot in the door. Even to move just a few feet to use the hole-shaped toilet that he described, you would still need to raise your hand and ask for permission “because of the cameras watching, always,” Turdakun said.

Turdakun was released in November 2018 on terms similar to house arrest, where he would be monitored around the clock from the GPS tracker on his wrist that could only be unlocked with a special key. Although he was allowed to leave his house and travel around his small city, he described constant harassment from the authorities.

“Every time,” he stressed when asked again.

“The cameras would see me and send off alarms,” he said, describing the use of facial recognition across his neighborhood. “The cameras are about [6 feet] in height — also Hikvision — and they’re on every sidewalk,” he said. “There are so many of them, they don’t need to change the directions of the cameras. It doesn’t matter how long the road is, even the shortest road will have cameras. The whole entire city has cameras watching.”

TechCrunch could not independently verify Turdakun’s account, which is consistent with other, albeit rare accounts from survivors of Xinjiang detention camps. During the interview, Turdakun showed a sketch that he drew mapping the layout of the detention camp, which corresponds with satellite imagery of the camp where he was held.

In an emailed statement sent via a public relations firm specializing in crisis management, Hikvision said it “takes all reports regarding human rights very seriously,” but declined to provide a company spokesperson’s name.

Liu Pengyu, a spokesperson for the Chinese Embassy in Washington, D.C., denied the allegations in an emailed statement.

Human rights lawyers say the former prisoner’s testimony will provide important evidence for the case filed with the International Criminal Court in The Hague. U.K. attorney Rodney Dixon, who is leading the team of lawyers compiling evidence of human rights abuses by China, said in a letter supporting Turdakun’s advance parole that it was “vital” for him to testify in future proceedings.

Turdakun told TechCrunch that he wants more people to know about the conditions in Xinjiang.

“Coming to America and being at peace and safe has been a goal for our family for a long time,” he said.