With Facebook, Twitter and Instagram banned by the Kremlin, TikTok is the last global social media platform still operating in Russia. In response to the Russian invasion of Ukraine, it announced it had banned new uploads on March 6 to protect users from the Russian “fake news” law.

But a new report has found that the ban was applied inconsistently; that new content uploads related to the war outnumbered anti-war content by 10:1; and that these pro-war posts now dominate TikTok’s war-related content. This has left the platform — after the ban was fully applied — effectively frozen in time, and Russian TikTokers none the wiser about new developments.

Crucially, this means there is no content on TikTok in Russia detailing the recently discovered massacres by Russian forces of civilians in Bucha, Mariupol and other Ukrainian cities.

The group also found the ban had been implemented improperly. Between March 7 and March 24 content could still be uploaded in Russia. This led to pro-war content outnumbering anti-war content on TikTok. After the ban, there was ten times more pro-war content posted for each anti-war video, compared to before the ban.

Tracking Exposed found two loopholes in TikTok’s ban on content posting: one was the poor implementation, and the other the ability to upload via the web version of TikTok. 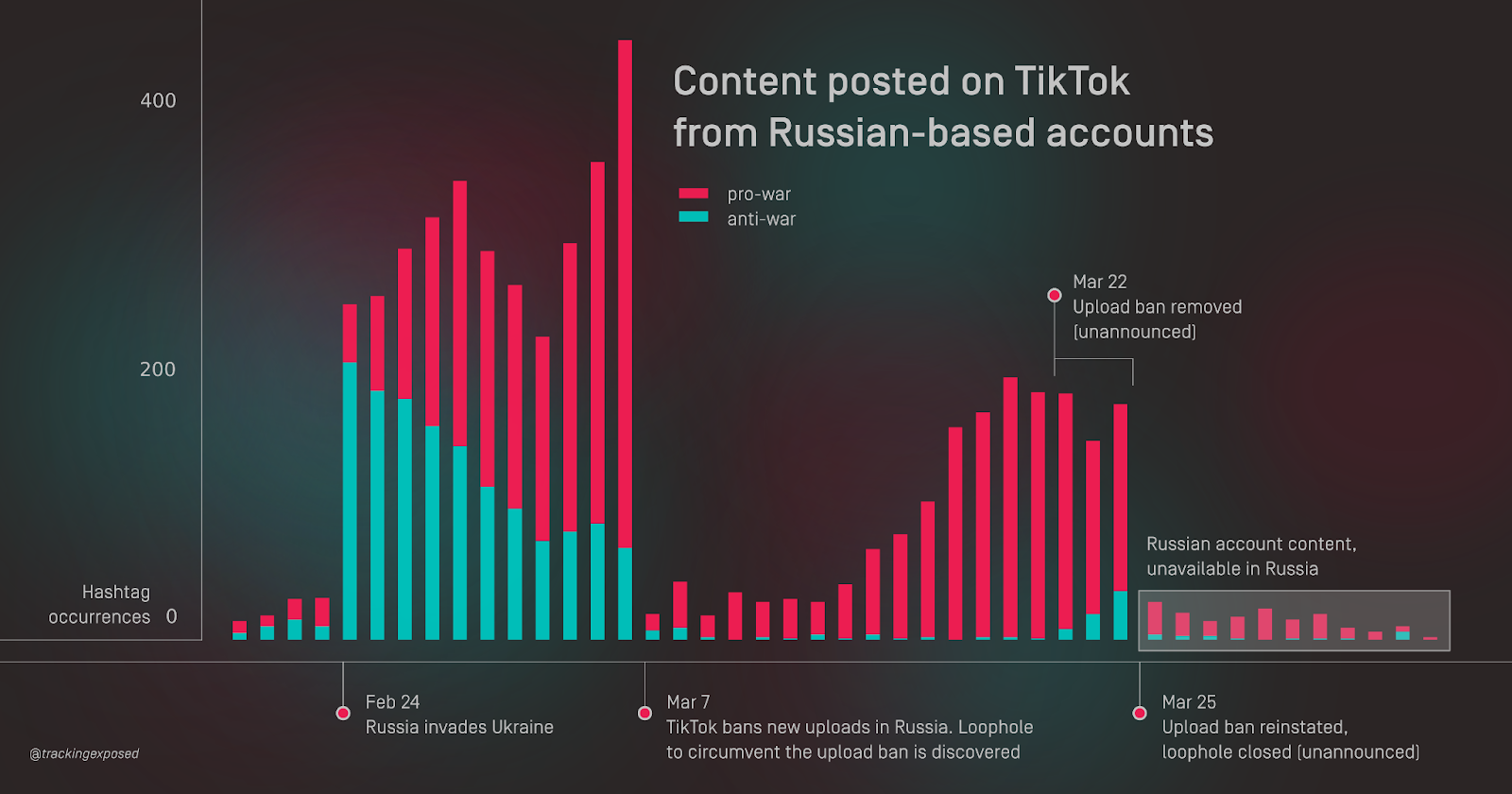 The group found that as of March 25 new uploads in Russia were not possible, and content from outside Russia is now fully banned, thus leaving the pro-war content to dominate.

TikTok originally announced the ban on new uploads to protect its Russian users from the Russian “fake news” law that makes it an offense punishable by a maximum of 15 years in jail to post anything false about the Russian army in Ukraine.

Marc Faddoul, co-director of Tracking Exposed commented in a statement:

Since the war began, TikTok’s policies in Russia have been opaque and inconsistent. In particular, the platform’s failure to properly implement the upload ban they had announced was exploited to flood the platform with pro-war narratives. Meanwhile, critics of the invasion have disappeared. Now, Russians are left with a frozen TikTok, dominated by pro-war content. There will be no Russian Spring on TikTok.

Tracking Exposed is a European nonprofit organization lobbying for digital rights via algorithmic investigations. The full report’s dataset, as well as a Jupyter notebook to render the graph is available here.