The scary headlines scream from publications about extreme weather, droughts, fires, lack of clean water and an increasingly tight timeline to do something about it. A new survey by Google Cloud that was conducted by The Harris Poll found that a vast majority of executives see sustainability as a key goal for their business. It also found that a majority are not actually measuring their progress over time.

That’s a problem because you can’t wish for sustainability. You have to take a course of action to achieve it internally and across your supply chain, and if you’re not measuring your progress (or lack thereof), it’s just a lot of talk.

Google Cloud surveyed 1,491 C-level executives or vice presidents across 16 countries to get a broad view of the sustainability issues that companies are facing. The good news is that 80% of respondents believed that their company is doing a good job around sustainability, which sounds great. But then they asked them how they were measuring their progress. That’s where the survey showed some more alarming responses.

“The research showed a troubling gap between how well companies think they’re doing, and how accurately they’re able to measure it. Only 36% of respondents said their organizations have measurement tools in place to quantify their sustainability efforts, and just 17% are using those measurements to optimize based on results,” Justin Keeble, managing director of global sustainability at Google Cloud, wrote in a blog post describing the results.

Executives responding to survey questions were surprisingly candid about the lack of measurement and what that means, with 58% saying there was “green hypocrisy” in their organizations, with approximately two-thirds questioning how committed their organizations really were to this kind of effort. There is a term for this — “greenwashing,” in which companies talk the sustainability talk but fail to walk the walk.

Surprisingly, 4% of respondents reported having not one sustainability effort in their companies. That means 96% do, but that could be one among many options, such as sustainable office policies, working with green vendors or running a recycling program. 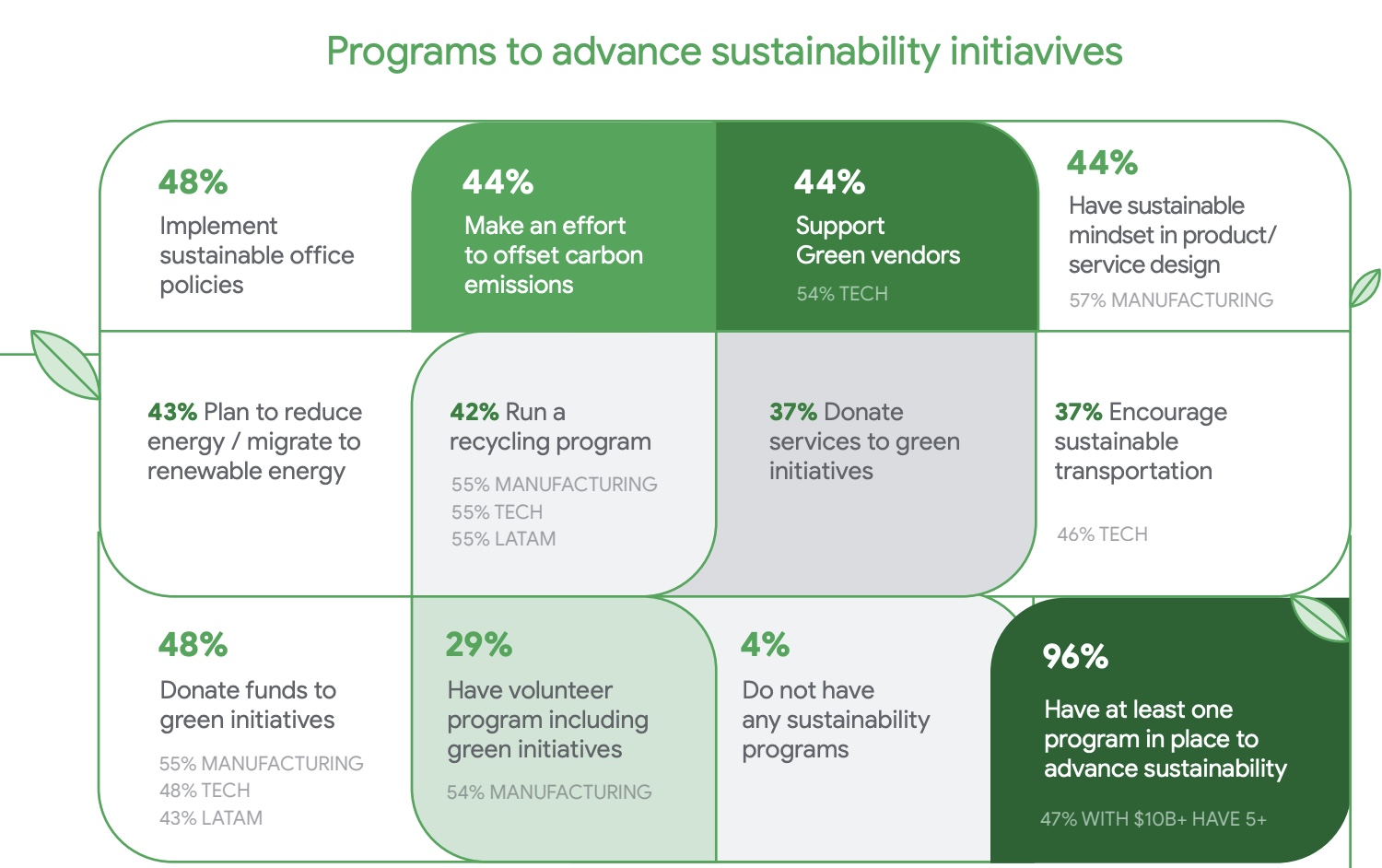 There is still reason for optimism as respondents see sustainability and broad ESG (environmental, social and governance) efforts as leading to better business outcomes, with 74% saying that sustainability can result in substantial business transformations.

The question is how to close the gap between desire (assuming it’s genuine) and the measurement problem. Google sees it as a technology problem.

“​​Technology innovation is the top utility executives believe will impact the sustainable growth of their organization and the sustainability of the planet at large, with 91% of respondents agreeing that ‘technology makes it possible for our organization to be more sustainable,'” the company wrote in the full report.

Unsurprisingly, the company is also announcing a carbon measuring tool called Carbon Footprint as a way for Google Cloud users to measure the progress of their sustainability efforts. Other companies like Salesforce are also offering tools for measuring sustainability progress — in this case, it’s called Net Zero Cloud (formerly Sustainability Cloud). It provides a way to manage the process of achieving a goal of net-zero energy usage over time. It’s worth noting that Google has a partnership with Salesforce around this product.

Earlier this year IBM bought Envizi, a tool for measuring environmental impact on the supply chain. Meanwhile, startups like ESGgo, Fresh and Tanso are working to build ways to bring some measuring discipline to the problem.

While it’s all well and good that respondents recognize the need for sustainability and see positive business outcomes from sustainability efforts — like having a planet on which to continue operating said business? — it’s imperative to follow the data to see how well those goals are being met.