Last August, TechCrunch noted TikTok was working to build its own augmented reality (AR) development platform called Effect House, which would allow creators to build AR effects for use in TikTok’s video app. Today, Effect House has officially gone live. The platform has been operating in a close beta since last fall, where it’s so far been adopted by more than 450 creators who have gone on to publish their effects on TikTok, where they’ve been used in 1.5 billion videos gaining over 600 billion views globally, says TikTok.

The company is now opening up beta access to encourage further development.

The launch will put TikTok in closer competition with both Snap and Meta, both of which already offer a range of tools that allow developers to build out AR experiences and effects for their own respective families of applications. Meanwhile, TikTok’s vast library of effects is a key part of what powers its video service today, and helps inspire creators to make videos. By allowing creators to build their own effects, TikTok will be able to prompt even more video creation.

While building tools with Effect House may require some technical know-how, the company has created a detailed set of documentation that teaches users how to use the platform to create specific types of effects, like Segmentation, Face Mask, Head Tracker, Face Stretch and 3D Face, as well as how to use different textures, materials, lighting and shadows, and more. The site also features templates, online tutorials and a Knowledge Lab, where TikTok engineers will live demo how to create a particular effect using Effect House. One demo already available shows creators how TikTok made the TikTok “Bonk!” effect and shares tips about how to make similar effects, for example. 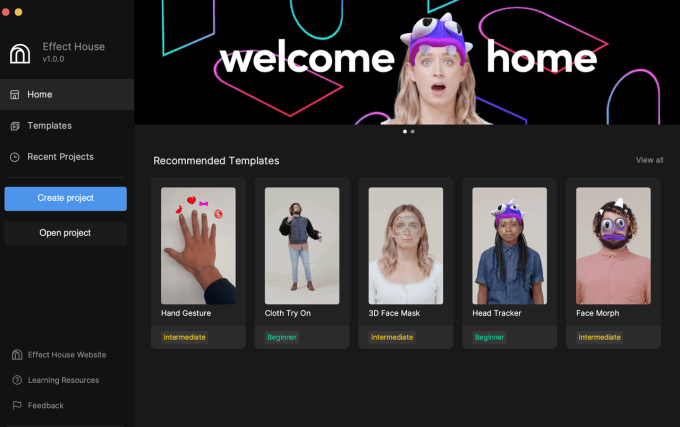 TikTok also published a set of dedicated guidelines for Effect House, which detail the additional policies beyond the existing Community Guidelines that effect creators must adhere to. These explain that TikTok won’t allow creators to publish effects that promote colorism, negative stereotypes against protective groups, those that depict cosmetic surgery (e.g. lip fillers) or those that encourage scrutiny of someone else’s appearance.

The latter is an interesting choice on TikTok’s part, as some of the most popular filters and effects to date across platforms are the “beauty filters,” that smooth skin, adjust jawlines, change the shape of facial features, apply makeup, plump up the lips and more. TikTok has its own set of these, as well. But there’s been a growing backlash about this sort of editing, as the impacts of filters on users‘ mental health — and particularly on younger girls — have become more obvious. A majority (59%) of Americans now say they find beauty filters troubling, noted a Consumer Reports survey last fall.

Lawmakers, in particular, have taken interest in how social platforms are affecting how young people see themselves, as they eye bills to regulate the industry. They queried social media companies last year, including Snap, Instagram, YouTube and TikTok, about things like eating disorder content. It’s likely TikTok didn’t want to create an unnecessary minefield of potentially problematic creative effects, given the app — already popular with younger people — is also allowed to serve an under-13 crowd through an age-gating system.

TikTok says the user-created effects will be reviewed by its Trust and Safety team to help ensure they adhere to the company’s policies before they’re released to the public. And if the company misses a violative effect, the community can report it using the “Report Effect” feature. This will prompt the team to re-review it for adherence to the Effect Guidelines. The company also says if it finds that an effect is being used in a way that violates the guidelines (even if the effect itself was not in violation), it will remove the effect and the videos that used it.

And TikTok will hide some of the creative effects, like those depicting alcohol, from appearing in the Effect Try in the app.

The company kicked off the launch of Effect House by promoting a number of early adopters of the tools, including:

When creators’ effects built with Effect House are displayed on TikTok, the effects’ results page will feature the creator’s username and link to their profile. All the creator’s published effects in their portfolio can be viewed from a designated tab on their Profile page, as well.

Though open to the public, Effect House is still considered a beta, notes TikTok.